It's hard to believe it but one year ago to this day my Nismo R32 GT-R showed up in front of my house and started me on a roller coaster ride of epic proportions. Like an amusement park attraction the year of ownership has had periods of long waiting, times of eager anticipation, bouts of nauseating surprises, and interspersed were all-important periods of sheer joy.

The year has been nothing less than interesting so I thought this would be a good time to recap all that's happened in one orbit of the sun.

March 24, 2015 – That sun was getting low in the horizon when the delivery driver arrived with my Nismo R32 on his trailer. I'd first seen her in a warehouse in Ontario, California at International Vehicle Importers. She looked a bit worse for wear but she was going for cheap and like that scruffy dog at the pound who's been there for too many weeks others had passed her by and it seemed like fate had conspired for me to give this car a second chance in a better home.

Yup, she was scruffy but she ran and all the important bits worked and I was over the moon at becoming the owner of an honest-to-God one-of-560 Nismo R32. Parking her in the garage beside my trusty R35 GT-R was an amazing moment for a lifelong Nissan fanatic.

March 26, 2015 – The first problem crops up: registering the car. I had all the paperwork I was supposed to need but of course navigating the DMV maze seemed as daunting as walking through an ISIS-held town while wearing an I heart NY shirt and a Star of David necklace. So began a month-long ordeal that made buying a fully-automatic firearm seem easier by comparison. Only after four trips to the local DMV, numerous phone calls, a level II inspection, two document mailings by IVI, hours of legwork, and at least one nervous breakdown was I finally able to get an Arizona plate to hang on the back of my funny wrong-hand drive foreign car. At least I'd been able to enjoy driving her – and spooking other drivers – on a temp tag while all of the DMV mess was getting sorted.

March 29, 2015 – Despite her flaws she caused quite a stir at the local Cars and Coffee. Like my R35, she was an attention-getter. I wish I could say I had to beat off a sudden onrush of girls looking to hop in the passenger seat of my amazing four-wheeled conveyance but like any GT-R, my Nismo R32 unfortunately seemed to attract more sausages than a Berlin bratwurst convention.

April 18, 2015 – I took a whole day to start giving my poor Nismo some of the love it had missed out on for so long. New oil, spark plugs, wheels and tires, and a good, thorough cleaning made her a bit more presentable.

April 21, 2015 – After going through the nine circles of the DMV and realizing that there was a woeful lack of info out there for American owners of R32 Skylines I thought I'd start a blog and unleashed a whole new level of weirdness onto an unsuspecting internet. Pretty soon I posted my first Progress Bar.

June 2, 2015 – Following a couple of solid months of enjoying my R32 the first nasty surprise cropped up. While prudently getting a 100K tuneup done, the head mechanic at Sonora Nissan (my local Nissan dealer who's service department is run by a good friend of mine) found a few additional things that needed changing to be on the safe side. That episode was chronicled here. Little did I know this was just the first of many times where I'd have to scrounge for parts from all corners of the globe, and be the first of many fixes to my poor forlorn Skyline.

June 30, 2015 – With the car apart to get the new damper and radiator shroud put in I decided to also install a nice shiny new Koyorad radiator to replace the old blue-painted Greddy one. Unfortunately that meant a few weeks of waiting for parts from Japan and Australia. Finally however the car was ready and I got to enjoy her again for a few days before I left on a long vacation back to my old home of the Philippines. After three weeks there I was sorely missing my cars and pretty soon I couldn't wait to drive around in both my R35 and the R32. After a few weeks enjoying both again it was time to go to the next step in my grand plan for the Nismo...

August 8, 2015 – After wishing my kid sister a happy birthday it was time to tackle a major task. After wrangling in a friend with promises of a free lunch and a day spent wrenching on a classic JDM motor, we got busy stripping out the R32's interior (which I wrote about here). The whole thing went pretty trouble free and if you want to do the same, here's my guide.

August 11, 2015 – Three days later and the R32 was at a local body shop for the first big step in its rejuvenation. Time for a fresh new paint job! I'd sourced a new front bumper cover to replace the old cut up one and new headlights, moldings, weatherstripping, and side markers would spruce things up once the paint was on. I was giddy as a schoolboy on bath salts!

September 15, 2015 – After a month at the paint shop getting stripped down then freshly repainted in a shiny new coat of its original trademark KH2 Gun Metal Gray my baby was finally done! She looked AMAZING in her shiny new glory!

It was supposed to be a great day and I was all raring to throw the interior back in, put on some new replacement badges, and show it off to my friends but alas, the gearhead gods were feeling cranky and I was soon stuck on the side of the road with a dead car. Luckily a friend and some cool tow truck guys helped me out and the car was quickly dropped off at Sonora Nissan. They managed to get it running again but it was still doing that awful, awful thing you never want to see in car – smoking heavily from the tailpipe. So, off it went to my friend Dan's shop for a thorough going over.

September 22, 2015 – One week later and the bad news was delivered, the engine had poor compression. The igniter was also acting dodgy (later on we'd also find one of the turbos blew an oil seal hence the copious smoke). It was a dark day to say the least and was the first of many instances where I cursed the idiot who decided to buy this problematic car (Oh, wait that idiot was me! Damn).

October 10, 2015 – To most sensible people a blown engine is a major setback, to a crazed car nut like your's truly it's an opportunity. Rebuilding the motor would be the normal decision but normal is so normal you know? So, let's go crazy and buy a 1 of 200 limited edition, brand new Nismo motor instead! A Nismo motor in a Nismo Skyline? Only Katy Perry and a large bottle of warm coconut oil would be a better match! 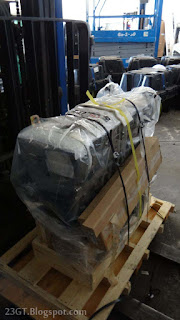 Acquiring all the parts to do the car and motor justice would take ages and my bank account is still hurting from it all. While accumulating the needed bits for the new engine we started work on some other important stuff like refurbishing the interior and making sure the suspension and brakes would be just as natty as the new engine bay. All of that's been chronicled in these Progress Bar posts: 6, 7, and 8.

And that brings us to today, March 24, 2016. A whole year has gone by amazingly and I wish I could say the car was running again BUT we have basically everything we need now to turn this car into something truly special. The parts list is posted here and now we just have to get everything to play nice. In case you've been wondering why it's taking so long it's because Skyline parts take a while to source and this has basically been a three-man project between me, my friend and expert mechanic Dan who's been doing the major mechanical work, and his trusty shop assistant Manny. It's been a long, difficult, and expensive journey getting this far but we're finally seeing the light at the end of the tunnel. This brings this recap Progress Bar post to an end but I hope you'll look forward to the next one when I should have some truly major changes to show. Below you'll see some current pics. Enjoy!