Back in 2019 I had to deal with a very annoying issue with my R35 GT-R - the driver's side speakers would intermittently cut out and just start buzzing. Even more annoyingly once the buzzing would start I couldn't even stop it by simply turning off the stereo meaning that long drives risked unpredictable bouts of aggravation from what sounded like a killer bee hive in my driver's door. Sometimes the buzzing would stop on its own if the car hit a bump but other times it would continue until I shut off the car and restarted it again. After a long time trying different things to isolate the culprit the issue was traced to the harness included in an upgrade kit I'd bought to update my 2010-spec infotainment system to the 2012 and later specification.

The local audio shop that did the install of the upgrade kit had apparently totally effed up the job but another audio shop seemed to fix the issue by rerouting the kit harness and adding extra insulation to it. That seemed to cure the problem until late last year when it reared its ugly head again. This time I wanted a more permanent fix. Unfortunately the guy who made the kit said he didn't recall how to replicate the harness he had sold me years ago so replacing it for a new, more reliable one was out. Ultimately I settled on just chucking all the OEM infotainment components out in favor of an R35-specific Android tablet called the T-Rex Pro kit.

Even though it was relatively expensive at $1599 the T-Rex Pro promised to kill two birds with one stone - it would fix my speaker issue by getting rid of the faulty harness from the upgrade kit, and it would allow for new features the car didn't originally have like being able to run Android Apps like Google Maps and Pandora natively or using Android Auto or Apple CarPlay instead (a feature pre-2017 R35's didn't have).

The unit is a pretty cool design and I love having it in my car now but there are a few issues you might want to be aware of before breaking out your credit card and ordering one for yourself. Since this is an infotainment system with a 10-inch high resolution screen it'd be better to complete this review in video form so you can see how the T-Rex Pro works for yourself and pick up some tips on how to use it so here you go:

The video is pretty lengthy but there are still some things that didn't make it in. First, let's talk about those OBD apps I mentioned at 8:46 in the video.

Neither DashCommand nor OBDLink could connect with either reader. Yes, OBDLink's own app wouldn't connect to their own OBD2 reader. The problem is that both apps require you to first link the reader via Bluetooth using the Android device's own Bluetooth pairing. The T-Rex Pro doesn't have a Bluetooth pairing system that lets you select devices. Unlike with wifi where it'll scan for active networks and let you choose which one to select, it doesn't allow you to scan for active Bluetooth devices and initiate a pairing. You can link a phone but the phone itself has to detect the T-Rex Pro and link to it via its own settings. Without being able to select and pair the device first, both DashCommand and OBDLink were unable to pair with the Bluetooth Dongles.

Car Scanner does allow you to access its options and select a device that it detects but with the VeePeak it was unable to connect successfully and access the ECU despite detecting the reader correctly. With the OBDLink MX+ it would connect properly then be able to read the ECU but then it would drop the connection after just a couple of seconds. It would then attempt to reconnect by itself but would just lose the connection again. So in the end it was also useless.

Torque Lite was unable to link with the VeePeak but it did successfully pair with the OBDLink reader and read engine parameters correctly. It was able to display gauges properly too but Torque unfortunately has some oddly limited gauge choices - for one thing it doesn't even have an engine oil temp gauge!

Also, after leaving the OBDLink MX+ hooked up and restarting my R35 the car flashed a "VDC Malfunction" warning. It resolved after I disconnected the reader and restarted the car. The car drove fine after but having an OBD reader cause a major malfunction warning to flash simply by leaving it plugged in is no bueno.

Overall, I can't recommend the OBD2 reader option if you want gauges on your T-Rex Pro. Either switch to an ECUTek tune or wait for the CanDo system from T-Rex. 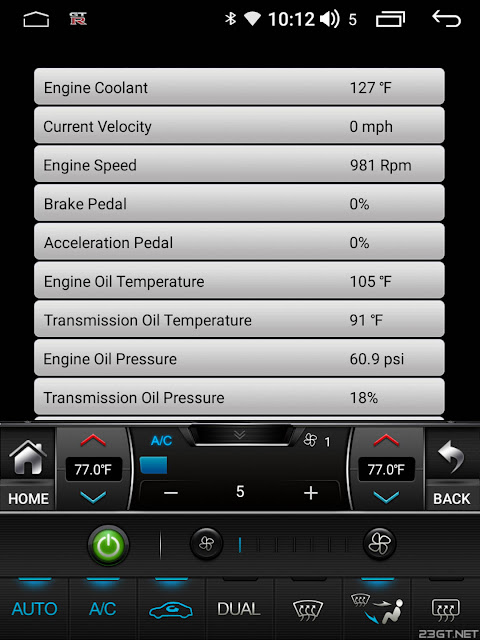 One thing I forgot to show in the video is that the touchscreen AC controls are actually dual-layered. Usually you'll just see the first box at the bottom of the screen which shows the home and back buttons plus the volume, fan, and temp controls. If you swipe up though you'll get the second box which has fan speed and additional AC buttons (most of which are duplicated by the physical buttons on the unit). 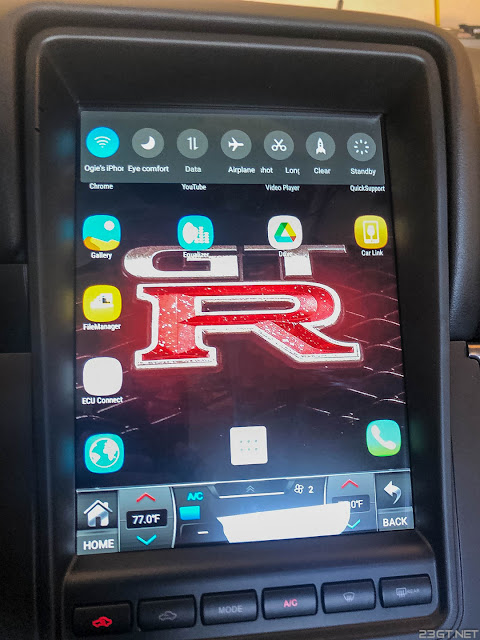 Swiping down from the top will reveal a shortcut menu that allows you to do various functions like enable airplane mode (not sure how much you'd use that in a car) and take screenshots.

If you're interested in how the T-Rex compares to the OEM hardware, here are some pics of them together: 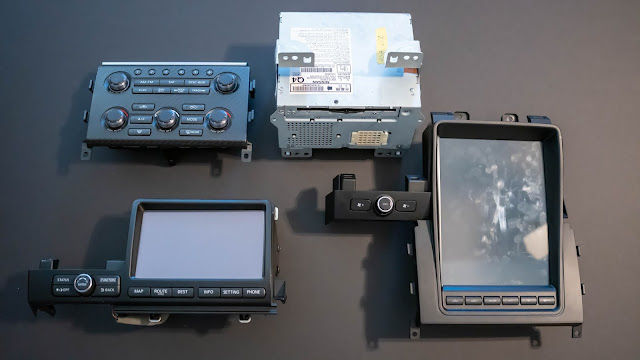 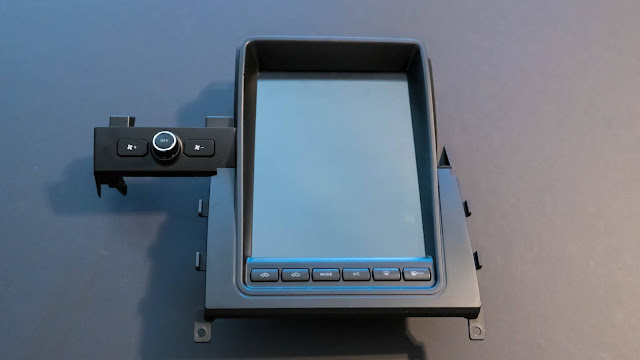 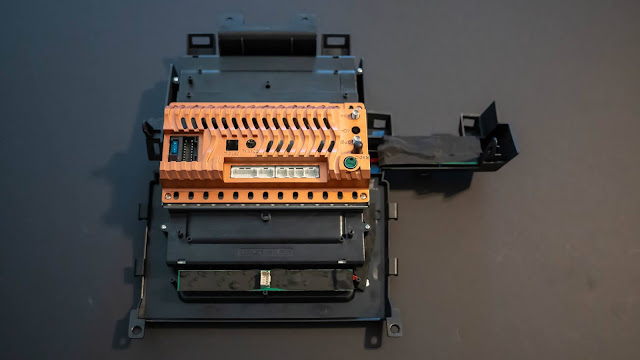