Moon Shot: The Race To Legally Import R34 Skylines To The US

Back in 1962 when a lot of us were still dirty thoughts in our parents' minds, President John F. Kennedy stood in the middle of Rice Stadium in Texas and spoke those now-immortal words: “We choose to import Skylines in this decade and a few other cars, not because it is easy, but because it is hard, because that goal will serve to organize and measure the best of our energies and skills, because that challenge is one that we are willing to accept, one we are unwilling to postpone, and one we intend to win!” 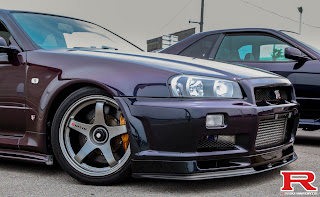 Well, maybe I misquoted that speech a tad but hey like I said, I wasn't around then. Anyway, just like the race to put the first man on the moon back in the sixties, importing Skylines and other JDM cars has been an effort that's seen many difficulties. Only now, with R32's turning 25 years of age is it becoming easier. Just like the launch of Sputnik in 1957 fueled the dreams of space amongst the common man, the first legal Skylines in the US in over a decade have ignited a frenetic interest in JDM cars among gearheads of all walks of life.


As I posted about a few weeks ago International Vehicle Importers is trying to bring in what's often considered the Holy Grail of JDM hardware, an R34 Skyline GT-R, and the lucky buyer will have to fork up a pretty penny for it. Just a smidge under fifteen million pretty pennies in fact. That's a huge sum by most any measure but one that may not seem unreasonable for a car that was the first and only one to be available in over a decade.

But now there's another contender in this race, a contact at Rivsu Imports informed me months ago (before IVI even made their announcement) that they were bringing in not just one but two R34s into the country legally using the same Show or Display exemption but were just waiting on the supporting documents before announcing it to the world. In Rivsu's case they'll be working on the final legalization requirements with JK Technologies – the company that handled the last batch of legal R34s through Motorex in the early oughts. I've reported before on how Rivsu had previously imported an R33 LM with the assistance of JK so they've demonstrated they have the means to do this feat. Not only does Rivsu have some great pictures of the cars but as further proof that these R34s are legit they showed me the import documents as well - including the NHTSA approval letter they recently posted on their Facebook page which I've included here. 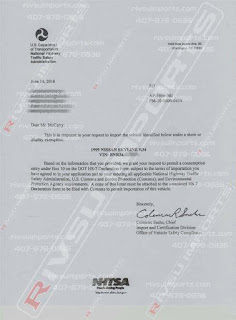 Having mentioned JK Technologies, please don't bombard them with calls trying to get more info about these cars. Due to the hush-hush nature of their importation business they won't comment on any cars they're legalizing without the express consent of the owners. Take it from me 'cause I called myself and was met with that response.


IVI will be trying to make their car California-legal, which will be an advantage to the right buyer with money to spare. On the other hand Rivsu won't have CARB certification on their cars but in exchange the costs and complexity of legalization should be much lower and an R34 imported through them will still be available to buyers in 48 out of 50 of these United States (Hawaiians are likely to still be left out in the cold – or heat – as well because of their crazy local laws).

Also to reiterate what I've mentioned before but some people still seem to be confused by: all these Midnight Purple II R34s will be street- legal, they'll just be limited to 2500 miles a year due to the Show or Display limitations. If you're reading this and happen to not be up to speed on the ins-and-outs of JDM car importation I'll refer you to my importation guide linked here: One Shade of Grey


Who'll be the first of these two experienced groups to fully legalize an R34 remains to be seen. But just like the moon landings of the sixties the race will be one for the history books. Ultimately the victors will be the Skyline and GT-R fan community at large because this means that one of the greatest performance car creations ever cooked up in the Far East will finally return to our shores as a legal immigrant. Rejoice everybody, because it's happening!


Here are some additional photos Rivsu provided to me of the first two cars they're bringing in for y'all to drool over (I've already done more than my share of that). Since they first informed me of these cars they've also found another one to import so at least three fully-legal R34s will be making their way to the States through their efforts.