Buying Your Own JDM Car Part 4.1: Found In Translation 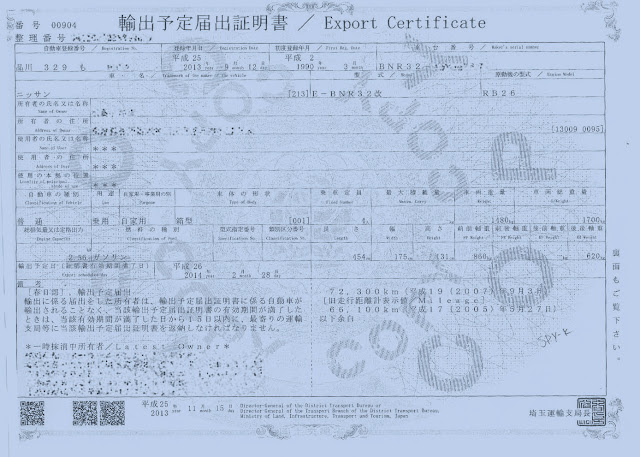 I was hoping my next post would be the continuation of my Japan travelogue but I went on another trip recently and then got sick for a bit so I haven't been able to make much progress on the video I wanted to accompany the posts. I didn't want to leave the blog hanging though so I decided to tackle a topic that was brought up recently by someone who contacted me about getting his JDM vehicle registered.

Back when I first registered my R32 in 2015 the whole process was still unheard of for most DMV branches in Arizona. One of the required documents that was needed during the whole ordeal was a translation of the Japanese export certificate - I mentioned that in the original part 4 of my JDM importation guide.

In my case that was straightforward: the importer had supplied me a translation and I just turned that over. There's a pic below for reference. For others however the process wasn't as easy. 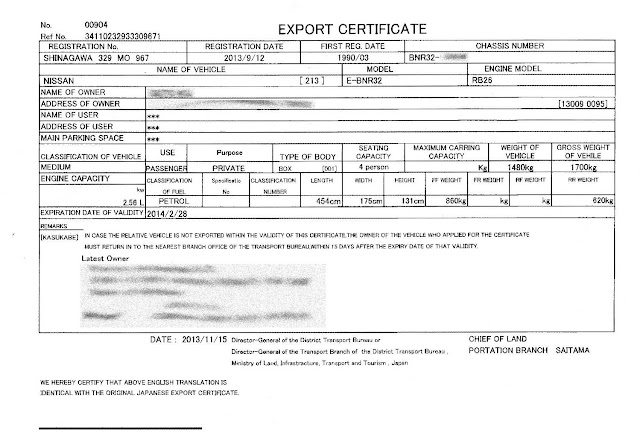 It's pretty much a universal requirement with every state DMV that you provide a translation of the Japanese export certificate if you're the first person to register and title the vehicle in the US. However, some states specifically ask you for a translation that's certified for accuracy and may also ask for it to be notarized.

Arizona is one state that has that requirement but it seems that not all DMV clerks are aware of it since many JDM owners I've talked to were like me and submitted a translation supplied by the importer without any official certification and that was fine. I didn't know of the requirement back in 2015 and it may have been added later on but many people I've talked to, even as recently as this year, said they weren't asked for a certified translation as well. You'll note on the pic of my translation that it has a blank for a signature but the copy I was given didn't have one and the DMV didn't question it at the time.

Recently however I tried to help a fellow JDM fan named Forrest register a Mitsubishi Delica that he had imported and he ran into a clerk who did insist on that requirement. I'm now writing this post to help other JDM car owners if you run into this issue.

On a side note, if you don't know what a Mitsubishi Delica is, it's a cab-forward van popular in Japan and Asia. An awesome feature it has is that it's available in a four wheel drive configuration which makes it great for more rural areas if you need the higher passenger or enclosed cargo capacity of a van versus an SUV or a pickup truck. I've ridden around in them several times in the Philippines and they make great rural tour vehicles. It can also be had with a turbodiesel so it's a wonderful JDM choice if you're into overlanding, mountain biking, survivalism, or simply living the van life down by the river offering free candy to the local youths.


I'm sure Forrest has perfectly upstanding uses in mind for his Delica but first he had to get it registered. In order to get his certified translation he searched for a translator using the American Translators Association website.

Forrest happened to find a translator in California that was convenient for him to use. He said Ihaya-san charges a flat $100 fee for the certified translation and about 20ish dollars to provide a notarized affidavit of accuracy so it came out to about $125 all told. 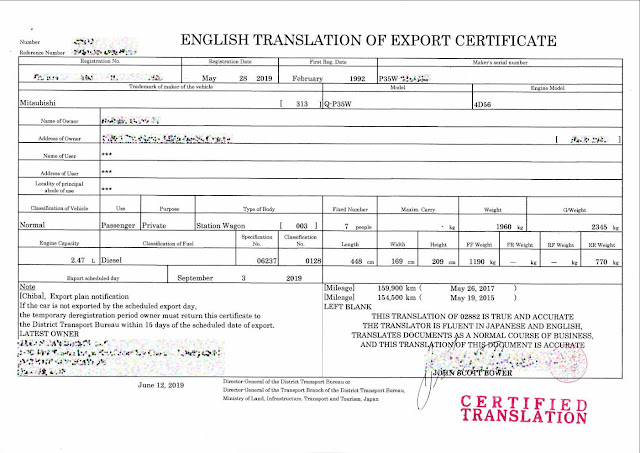 Note that there are online translation services that specifically offer to provide you an English translation of Japanese Export certificates but these may not fly with your DMV since the online services tend to be based overseas and therefore can't provide a notarized copy.

Another method of getting an official translation came from a friend of mine. Laren, my friend who owns the Eunos Cosmo I did a photoshoot of a while back, had to go through the same ordeal as Forrest did. In his case he looked up the location of Japanese consulates in the States and found out via the Los Angeles Consulate that they had an honorary consul in Phoenix who was a Japanese language professor.

Laren reached out to him and he was able to secure a translation from him on official letterhead that satisfied the DMV. That was some years back though.

If you live outside of Arizona but are facing the same problem, aside from using the ATA, you can also try Laren's tactic and contact the Japanese consulate for your state to get a recommendation on local translators. The Japanese embassy has this directory of the various consulates across the country:

And then there's the third option, which is to learn Japanese yourself and become a certified translator. That would probably take more time than you'd care to wait though so it's probably best to stick to the above methods. But just think of all the dirty Japanese porn...err, classic Japanese literature, I mean, that you could read once you've gained mastery of the language!

I hope this post proves helpful to any of you seeking to complete the legal immigration of your freshly imported Japanese steeds. If the video gods are on my side next post should be the continuation of my travelogue featuring the Nissan Guest Hall and Engine Museum. See you then!