The Show or Display Import Law for Dummies Part 3.2 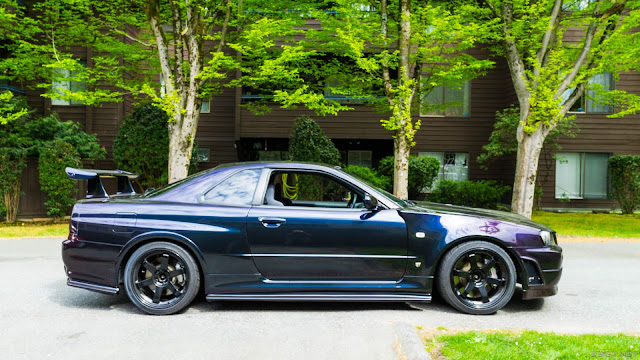 My last article started going over the application you'll need to submit to the NHTSA if you have a Show or Display-eligible car to import such as a Midnight Purple 2 R34. In this part I'll go over the last two sections of the application which are somewhat complicated all on their own. 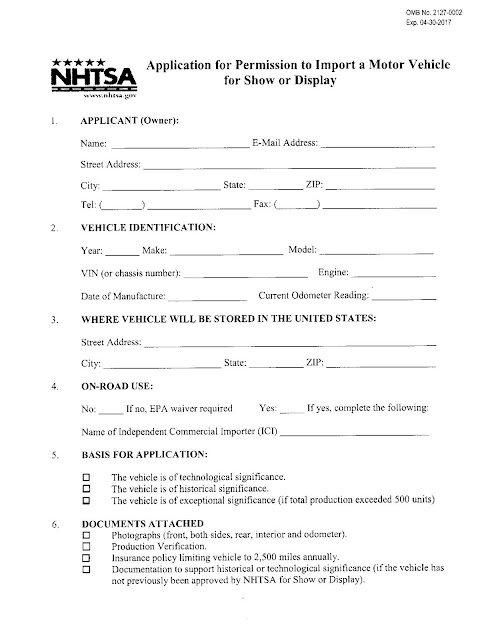 “6. Documents Attached” is where things can get really tricky so lets break it down into its parts.

Photographs is self-explanatory – they want good pictures of the front, both sides, rear, interior, and current odometer reading of the car. Thankfully I'd taken good photos of my car when I first bought her so I had them handy. I simply had to print them out on letter size photo paper and attach them to my application when I mailed it in. One interesting thing to note is that the application instructions specify they just want a three-quarter front and three quarter rear photo of the car, plus interior, odometer, and maybe any special features. I actually didn't have three-quarter photos of the car since I expected them to need photos of all four sides instead like with insurance companies so I submitted the photos I did have and they were accepted - in any case the four photos would have been more detailed than two quarter images anyway. One of the photos I submitted can be seen at the top of the page.

Now, they don't mention it as a requirement but after the NHTSA started working on my application they actually emailed me and asked for a photo of the chassis plate in the engine compartment and a good photo of the engine bay. It makes sense they would ask for those so I'd suggest throwing them in with your initial application just to make things easier. Oh, and do use good shots. You don't have to go whole hog with a full photo shoot and a sexy model or two but I don't think the NHTSA staff will appreciate Craigslist-style photos shot with a 10-year old Motorola flip phone.

The next two required documents are likely going to be the biggest hurdles if you don't already have them.

First, “Production Verification”. What that means is that they want proof from an established historical source – usually the manufacturer – that your car is the same type as what's included on the Show or Display approval list. In the case of the R34 that used to mean a letter from Nissan that basically states your car's serial number is indeed one of the Midnight Purple 2 or M-Spec Nur cars and preferably the letter should also verify the limited production numbers of the vehicle. In my case I was lucky in that the previous owner of my R34 already had such a letter from Nissan Japan that a friend had gotten for him. You can see what it looked like in the picture below: 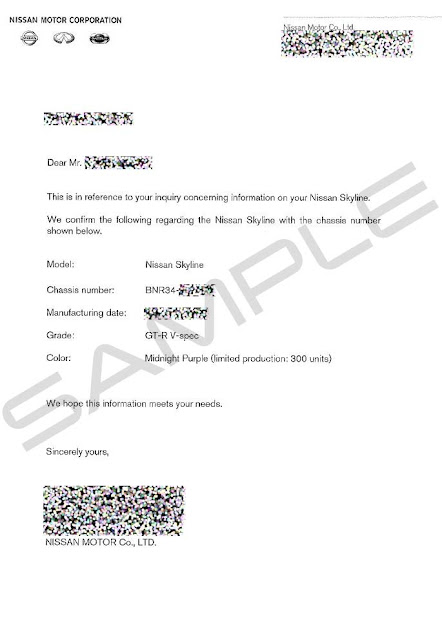 As you can see it clearly states the type of the car, the serial number, and verifies that only 300 were made (Well, SUPPOSED to have been made because if you read part 2 of the guide they actually made 282 V-Specs plus 64 regular MP2 cars. The original run was supposed to have been 300 total though in the brochure.) It also specifies the manufacturing date which is extremely important of course to prove the car is 21 years old for EPA purposes.

Now I wish I could tell you an easy way to get a letter like this from Nissan but I already got one with the car so I didn't have to hunt it down myself. Unfortunately as of December 2015 – note that my letter is dated from November 2015 – Nissan stopped issuing such letters due to a change in corporate policy. That totally sucks but the good news is that probably due to that policy change the NHTSA is no longer requiring such a letter from Nissan to approve a Show or Display R34. My understanding from the NHTSA is that for the batch of R34s that they approved together with my car they requested the information from Nissan themselves and that allowed several owners without letters to get approved. If you're submitting your own application though it can't hurt to include the information from the GT-R Registry listing of Midnight Purple 2 and M-Spec Nur cars and highlight your serial number as being included just to act as a form of historical source to help strengthen your case:

Note that it's only for the R34s that it's confirmed the NHTSA no longer expects you to provide a manufacturer letter. If you're applying for a non-Nissan Show or Display vehicle then the requirement should still be in effect.

If you thought getting a letter from the manufacturer would be your biggest worry in this whole process then I'm sorry to say that it might not be. The next document the application requires is proof of insurance. If you're in the lucky position to buy an R34 GT-R to import then you probably have a regular daily driver car or two already so you might be thinking “It's car insurance. What's the big deal? I can just add it to my policy.”

Well, that's easier said than done. First, a regular car policy won't cut it because Show or Display explicitly requires a policy that states you're limited to 2500 miles a year. Normal car insurance doesn't have such limitations – what you need is collector car insurance from companies like Hagerty or Grundy. “No problem! I'll just give them a call!” you might be thinking, but it's not so easy as that either. Why? Remember, the car isn't even in the country yet. Car insurance companies won't typically insure a car that's not even in the US, for logical reasons. I tried calling several companies myself and got the cold shoulder once they found out the car wasn't in the US yet, even after explaining how it was in Canada and I was in the process of applying for the Show or Display exemption. And don't think you can just lie and claim the car is in the country already – any collector car insurance company worth its salt will ask for proof a Japanese-market car was imported legally. So that leaves you in a classic government Catch-22 – they require you to have insurance in order to apply to import the car legally but companies won't issue insurance without an approval letter. So, is it time to just give up and find a nice warm corner to sob in and repeatedly curse the fickle whims of the Federal government?

Well, not quite yet. What you need is a specialist collector car insurance agent. One that has good connections and is helpful enough to get in touch with the right people at the insurance company to arrange a policy that meets your needs. If you don't have a good agent like that already and need one for your own Show or Display import project then give Debby at Full Octane Insurance a call. They're located in Tennessee but can arrange for policies in all 50 states and were a big help for me and another MP2 owner who kindly gave me their contact info. Thanks to Debby I was able to get a policy from Grundy that had the necessary stipulation that the car is limited to 2500 miles a year of driving.

Another important thing I should tell you is that the NHTSA requires you to submit the full insurance policy packet to verify it's all legit and that you really do have a 2500 mile annual limit. Just sending in a photocopy of your insurance card won't do.

Once you have the photos, the manufacturer letter, and your insurance documents you're pretty much good to go. For the purposes of importing a MP2 or M-Spec Nur R34 you can ignore the last requirement of “Documentation to support historical or technological significance” - that's just for cars applying to be included on the approval list, not ones that are already on there. 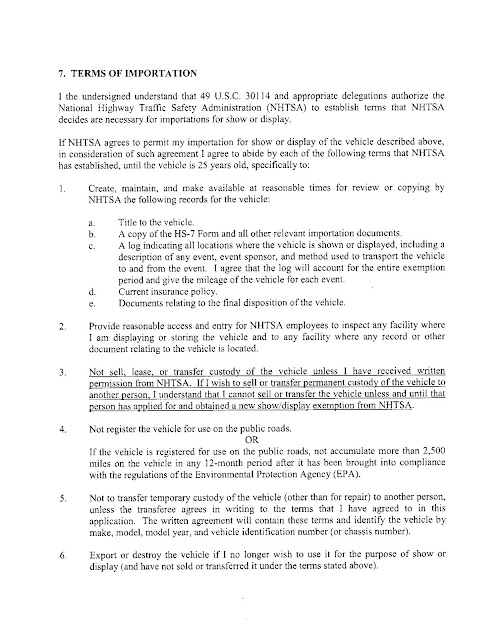 The final thing you want to do to finish up your application is to thoroughly read “7. Terms of importation”. Make sure you read through this carefully because at the end of this section you have to acknowledge that you accept the terms by signing as the prospective purchaser – so it's basically a legally binding agreement between you and the NHTSA that you'll do the things specified to keep the car in good standing. 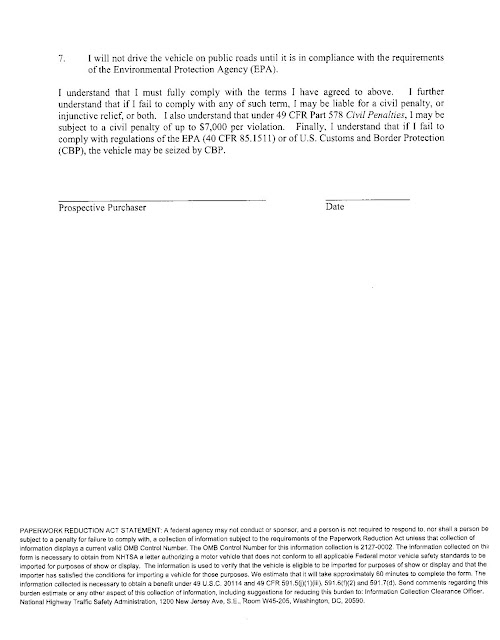 Keep in mind those terms only apply as long as the car is under Show or Display so once the car is over 25 years old and meets the standard import exemption criteria they no longer apply. The same is true for the 2500 mile yearly mileage limit. There's also no need to do more paperwork once the car hits 25 years old to change its status – as far as the Federal government goes at that point your car is just like any other imported car that's over 25 (until a Mexican drug lord hires you to follow his right-hand man through a secret tunnel with a trunk full of narcotics, in which case the Feds are probably going to take a renewed interest in you.) On the state level you might have to shuffle some more papers at that time but we'll get to that in a future article.

Once you have your application correctly filled out with the requested extra documents included it's time to mail it in to NHTSA. Send it to the following address and then go find something to occupy your time for the weeks of waiting ahead.

If you're lucky it may take just three weeks or so for you to get that sweet, sweet letter of approval back but if you have my level of luck – the type where you can go to one of those family-friendly trout farms that even 5-year olds can land a nice fish at, and manage to only catch a cold – then you'll be in for a three month wait because every gearhead in the country just decided to apply at the same time you did. Stocking up on booze, video games, and sudoku books may help. Therapy might too.

Having survived the wait though you'll be treated to one of these – a nice approval letter for the newest addition to your garage: 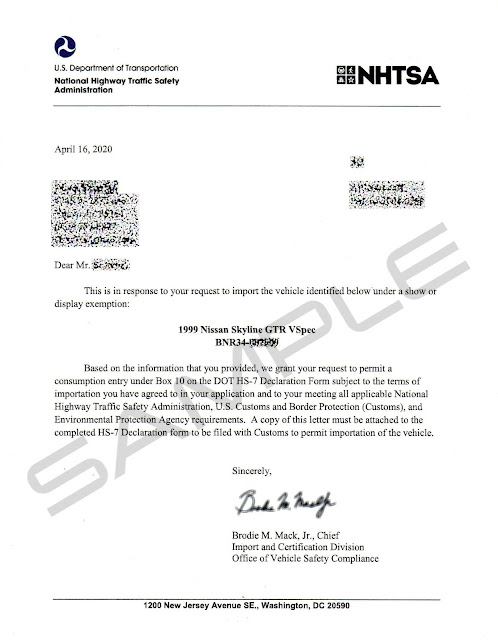 Next you'll have to use that letter to convince the cool people guarding our nation's border to let your car in and I'll go over that challenge in the next installment. Please come back for that and until then, drive safe everybody!