The Show or Display Import Law for Dummies Part 1 (With Video): The Basics 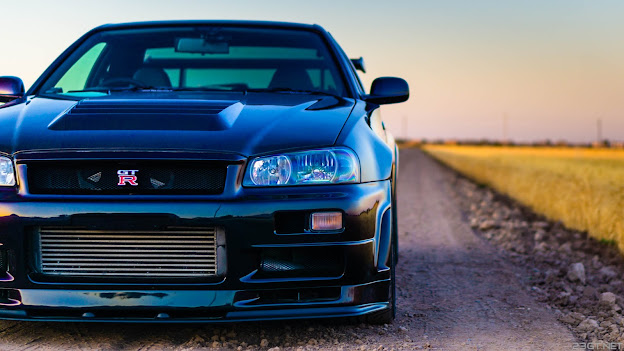 If you're new to the blog and have seen my freshly-imported R34 GT-R you may have been wondering how exactly I managed this unique feat of JDMness when R34s aren't supposed to be legal to enter the USA yet. It should be less of a mystery to long-time readers since I've already touched on the subject before in several previous articles here and here.

In those earlier articles I've summarized the Show or Display law and which R34s are legal to import under it and there are plenty of websites where you can find a quick explanation of the law and the full list of eligible vehicles - but I've yet to see someone actually explain the process of bringing in a car from start to finish and from the perspective of an owner. That will be the purpose of this guide: to go into more detail on what I had to go through to become a proud owner of the most infamous JDM car on this planet and several higher dimensions.

I've also made a video summary which you can find below but for greater detail this written guide will be split into several parts.

Before we talk about the importation process I should go over the basics of what the Show or Display law is about and clear up some misconceptions too.

Defined in more technical terms the “Show or Display law” is actually an amendment to the Code of Federal Regulations, specifically section 49 CFR 591. The Code of Federal Regulations or CFR is basically the giant collection of rules that the different administrative agencies of our US government can enforce. It's divided into sections called Titles and Title 49 applies to transportation while Part 591 of that Title deals with importation of vehicles subject to Federal safety standards – 49 CFR 591 for short.

In 1988 49 CFR 591 had been revised by the Imported Vehicle Safety Compliance Act (aka H.R. 2628) to apply more stringent standards to cars being imported by entities other than the manufacturer. Prior to this act gray-market car importation was thick with questionable compliance to federal safety standards so the new law made the requirements more strict. It also introduced the 25 year import exemption that specified a cutoff where a car 25 years or older was exempt from needing safety modifications to enter the country.

The amendment allegedly came about because a certain rich guy named Bill Gates, who you may have heard of, shipped a Porsche 959 (an ultra high-tech mega-expensive supercar you may have also heard of) to San Francisco in 1988. The problem with that is Porsche never sold the 959 here in the States and therefore never certified it to be US-legal so it was held by US Customs at the port. Until the car turned 25 years old and could be let in under the 25 year import exemption for foreign-made cars the only way the car could come in was to get it certified to US standards. Which meant doing some crash testing - not exactly practical when only 292 were made and they cost $225,000 a pop (in Eighties dollars mind you!). With most people the story would end there and the car would get shipped back to its original country to be resold and the prospective owner would just have to drown his sorrows in hookers, single malt Scotch, and the occasional hit of white powder.

For old Billy though being richer than the Monopoly Man meant he had all sorts of strings he could pull so after throwing money and a couple dozen Washington lobbyists at the problem for a few years in 1998 he got another Billy – Rep. Billy Tauzin, chair of the Subcommittee on Transportation, Trade, and Consumer Protection – to add an attachment to a Commerce Committee bill and get it passed through Congress. This attachment amended 49 CFR 591 to add certain exemptions for vehicles to be imported without having to comply with Federal Motor Vehicle Safety Standards (FMVSS for short).

In addition to research, racing, and training, the revised exemptions now included a vehicle “of such historical or technological significance that it is worthy of being shown or displayed in this country even though it would be difficult or impossible for it to be brought into compliance with the FMVSS”. In other words, if your car has enough awesomesauce, yeah sure, we'll let you into the country without hassling you too much broski!

The amendment was published in the Federal Register (the official journal the US government uses to inform people of changes to the laws) on July 14, 1999 and became law on August 13, 1999.

Under the provisions of the amendment anyone could now apply to the DOT through its National Highway Traffic Safety Administration for approval to import a rare and significant car before it was 25 years old or older.

If you wanted to do so the first step was to apply to the NHTSA for them to review a particular car model to determine whether it met the historical or technological significance requirement. This is a fairly lengthy process that's not for the faint of heart, short of will, and you should probably be deep of pocket as well because the cars that tend to qualify are usually very rare and expensive.

Once a car successfully passes the determination process it gets put on a list of approved cars that's periodically updated. When a car model is added to that list then other cars of that identical type can then be imported without having to go through determination again. Some cars on the list there's only one example of like the 400th Ferrari Enzo that was given to Pope John Paul II and later auctioned off for charity, others number less than a dozen like the Koenigsegg One:1, while others number in the hundreds but generally the cutoff for a car to be considered for Show or Display is 500 made or less.

What's interesting about the rarity requirement is that a car can qualify even if thousands of them were made as long as a particular model was a limited edition and can be shown to have enough significance to qualify. That's why even though there were 11,000 or so R34 GT-R Skylines made, since the Midnight Purple 2 V-Spec was a limited production version of the first R34 GT-R model year that numbered less than 300 it was allowed to be put on the list.

If a car is on the approved list then the owner who wants to import it needs to file a different application to the NHTSA for his particular example and get it approved before bringing it into the country. This is a simpler process since you no longer have to prove your car model's historical or technological significance but you do have to provide proof that your particular car is a true example of that model – so, no, I don't advise you try to buy a pink R34 V-spec and respray it Midnight Purple 2 and attempt to pass it off as one of the original 1999 cars. The Feds won't just look at some crummy Craigslist-grade celphone pics you sent with your thumb over the license plate and call it a day – they'll actually want some serial number documentation, usually in the form of a letter from the manufacturer.

And I don't think stuffing the envelope with a pack of Haribo gummy bears and a wad of cash will make much difference either. Someone tried that and got an angry letter back with the wad of cash but minus the Haribos. There was a handwritten note though that said they were delicious.

Assuming you succeed in getting an approval from the NHTSA you're not out of the woods yet because one other thing that's commonly misunderstood about Show or Display is that it does not automatically get you out of modifying the car to meet US regulations. See, there's two sets of regulations at play here when importing a car – the safety standards set by the DOT, and the emissions standards set by the EPA.

Like the proverbial honey badger, EPA don't care if you get exempted by the DOT from meeting safety standards. All they care about is how much exhaust your nasty car is going to spew leading to the ice caps melting, fledgling birds getting birth defects, and a nasty shortage of trees to hug. That means that even if you get a car approved by the DOT for import you still have to make sure it can meet the EPA's standards for exhaust cleanliness. That means hiring a specialist import company, known as a “registered importer” to modify it to meet those standards and then arrange the testing for proof.

As you can expect that's a very costly and time-consuming process costing tens of thousands of dollars. Chump change if you just paid a cool million for a one of seven hypercar but a ton of money if you're bringing in a Japanese import worth barely ten grand.

Thankfully though the EPA does let you have a free pass if your car is of legal drinking age. Yup, that's right, if your car is 21 years old or older it can enter the country without all the emissions fuss and sidle up to the bar for a pint of Arrogant Bastard Ale.

And that's why I waited until this year to import my R34 even though I bought it nearly a year ago. Less than a year made the difference between 30 to 40 grand in emissions work versus none at all. I think you'll agree that was a pretty sweet deal.

Before I finish there's one last thing you have to understand about cars imported under Show or Display. Once the car meets EPA emissions standards you're allowed to drive it on public roads BUT you're limited to 2500 miles a year. If you think that's a bum deal then consider that that's actually a reasonable amount for what's essentially a collector car that's not meant to be used as regular transportation. Also, that's actually a lot better than the original amount the legislation proposed – in the original draft of the law the legislators actually proposed a 500 mile a year limit! It was thanks to input from a coalition of collector car owners that they were convinced to relax the restriction to 2500 miles to allow for upkeep of the vehicle and reasonable travel to and from and during events.

How will the NHTSA know that you're sticking to that mileage limit? Well, the application states you have to agree to keep a log tracking your trips and mileage and that they can audit you at any time they request. Also, you have to submit proof of insurance that limits you to 2500 miles a year. We'll go over all that in more detail in a later post.

Okay, right about now you're probably crying “Enough already! Just tell me how to get my mitts on a car I thought I could only own in my dreams and/or Gran Turismo!”. Fine, fine. Chill! We'll get to how to go about finding a Show or Display car in the next part so I hope you'll come back for that. Until then, drive safe everybody!