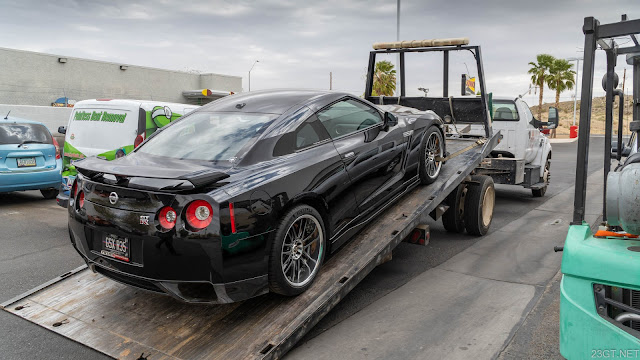 It's been a while since my last post here on the blog and there have been both good and bad reasons for that. Not only has work been busy but I've also been occupied with sorting out a family trip for later this month. Now that my family has had their COVID shots we're back on in-person speaking terms again and ready to get back to some sorely-missed traveling. While on that trip I plan on visiting a newly established location here in the US that JDM fans like us should be very interested in, so stay tuned for a post and hopefully video of that in the future.

Speaking of the future you can also look forward to posts about how my stable of GT-Rs is doing. The transmission issue on my R35 was a huge reason for the lack of recent updates since I've been busy getting that sorted...and hopefully she'll be back to the usual routine of attaining ludicrous speeds within the next couple of weeks.

The R32 has had some upgrades in the meantime and I found time to do a quick shoot of it to showcase the new additions so that's another post in the works.

And lastly the R34, the one most people are likely interested in is finally almost finished with the paint protection that I'm having done to make sure that glorious coating of Midnight Purple 2 continues to wow for many years to come. It's been a long process so I can't wait to get behind the wheel of my newest addition again.

As you can probably guess coordinating repairs and upgrades and whatnot on three cars you love simultaneously is pretty stressful...exciting too, but sometimes it can be enough to make your ulcers have ulcers so to keep from going completely batshit insane I have to find stuff to decompress with. One of those things lately has been watching (and rewatching) Godzilla Versus Kong because, yeah, leaving your brain behind and watching a giant freaking nuclear dinosaur go ape on uh, a giant ape, and taking half of a major urban center with them is a pretty good distraction from your mundane concerns.

Because I'm way too much of a nerd I decided to make a video about how anime helped shape the look of the latest installment in the MonsterVerse and here's a link if you want to join me in my geekdom:

I promise, the next post and video will actually about cars again so I hope you'll be back when they hit! Drive safe everybody!