I Decided To Go Electric This Year - And Nissan Sent Me A Care Package!

It seems like ages ago that Nissan announced the second verse in its ode to electrification - the sleek Ariya crossover. Indeed, in the two years since the production version was unveiled the world has changed radically - the global pandemic has started to recede, geopolitical instability has increased thanks to one Russian dude who didn't get enough hugs, bits of silicon smaller than a postage stamp - or rather a lack of them - have thrown global trade into chaos, and some people have decided that digital drawings of cartoon monkeys scratching their bottoms are better investments than real things like gold, houses, and actual monkeys scratching their for-real posteriors.

Around the time of the Ariya's debut I wrote a post about how I thought it was exactly what Nissan needed to get back on track as one of the world's leading carmakers. Here's a link if you want to refresh your memory.

In that post I also talked briefly about how I had wanted to get an electric daily driver myself after having enjoyed putting around running errands in a Nissan Leaf for a day. A few months ago I decided to finally commit to a more electric lifestyle and put down a reservation for a Nissan Ariya Premiere - and I've been waiting impatiently ever since!

I'm sure some people will question getting an Ariya (especially with its delayed launch) and say I'm letting my Nissan bias get in the way of an objective choice but honestly I've looked at the options and still think the Ariya is the best fit for me.

Kicking the obvious elephant out of the room, I already explained in that previous post why I don't want a Tesla. I really like the Model S but it's way more than I want to spend on a daily driver. Don't like the Model X at all and that's also too expensive anyway. The Model 3 and Y just look okay to me and don't really light any flames of desire styling-wise but I REALLY dislike the interior design. Putting everything including important displays like the basic instruments on one central monitor far out of the driver's line of sight is a reduction in safety and convenience, and only serves to benefit Tesla themselves by cutting costs - so that's a deal-breaker. Besides Tesla hasn't yet cured itself of its hit-or-miss quality issues.

The VW ID.4 is immediately out of the picture for several reasons - less range, frumpier styling, and no dealer in the same zip code as me if things go wrong. The mechanically identical Audi Q4 E-tron is much better-looking than the Vee-Dub but still has less range than an Ariya and no local dealer. I'd LOVE an E-tron GT but that's out for the same reason as the Model S.

The Ford Mustang Mach-E is sleek and has great range. Better yet, it's already available at dealers unlike the Ariya. Once outfitted to have at least as much projected range as the Ariya though it costs at least as much and probably more with current dealer mark-ups due to tight inventories. But mainly I just think Ford slapping the Mustang name on it was idiotic since it is not a two-door sporty coupe and it would have done just fine if they'd just called it the Mach- E. So, it's out on principle!

The best alternative to the Ariya would be the Hyundai Ioniq 5 and Kia EV6. I think they're great and would totally get one - more likely the Kia - if not for one important reason that's applicable specifically to me: dealer relationship.

I've been a customer of my local Nissan dealership for over a decade and a half now and their service manager is a good friend of mine. That counts for a lot if you need help.

I have no relationship at all with my local Hyundai or Kia dealerships. What's worse for the Kia is that my local dealership has never upgraded in all the years I've lived here in Yuma and still looks more like a mid-grade used-car lot than a franchised new-car dealership for a major auto manufacturer. The Hyundai dealer is a bit better but still doesn't have a lot of curb appeal. Not exactly enticing when you're considering a brand new $50K EV.

I also know for a fact my local Nissan dealer is EV-certified. Yes, EV's are much less likely to have mechanical issues than internal combustion cars but if something does go wrong it's hard to ignore the peace of mind that comes from knowing your friend has your back at your local dealership.

Once you add that I really like the Ariya's design and it has all the features I want, it becomes the logical choice for my particular situation.

Which still leaves me with several months to wait before I can get my hands on one even though I reserved early. Adding insult to injury is the fact that the release date is still a vague "Fall 2022" which might go even later due to delays from the ongoing chip shortage.

At least Nissan's social media team seem to be on the ball with trying to keep antsy customers like me happy - and away from the temptation of rival companies' products. 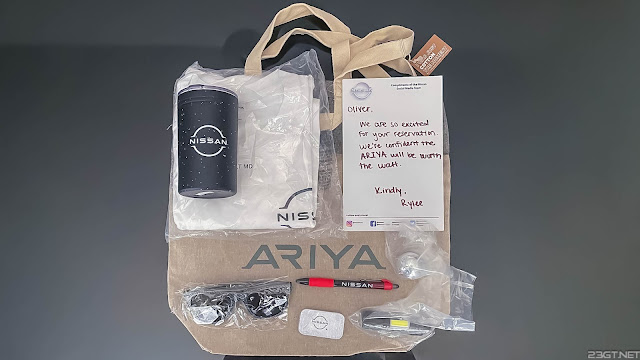 After I commented on one of Nissan's YouTube videos on the Ariya and mentioned that I had a reservation they contacted me and later sent the little care package you see in the pic. A shirt, a mug, various odds and ends, and an Ariya-branded tote bag to carry it all in! Sure, it's no substitute for actually getting my sweaty palms all over a new vehicle but you can't argue with free! Also it's nice to know Nissan is acknowledging the long wait and putting in the effort to keep positive vibes going.

And now it's back to scratching a mark into my garage walls for every day I go EV-less. When that fateful day comes you can be sure you'll get to read about it here on the blog! Don't worry though - I assure you the GT-Rs aren't going anywhere. In fact they're precisely the reason I feel comfortable getting an electric car - with three GT-Rs for fun driving times and my Armada for long-range haulage I can enjoy electron-powered mobility every day without worry!

Now I just have to convince myself not to keep my current daily driver FR-S and turn it into a track car...

Thanks for reading and drive safe everybody!