I've talked previously about how I got my R32 Skyline GT-R and briefly mentioned that it's not the best example out there but neither is it the worst. This car's had its share of neglect and questionable mods but there are bright spots too. It's like that pretty and nice high school girl you knew that always kept ending up with the wrong boyfriends – a little worse for wear but still presentable and just needs some TLC from the right partner. Being a rare Nismo R32 I think she deserves a shot at being returned to her former glory and that's going to be my goal over time (hopefully I haven't bitten off more than I chew lol). These “Progress Bar” posts will track how things are going. It's appropriate then to first take stock of the car as I got her. For posterity, here's how she looked originally: 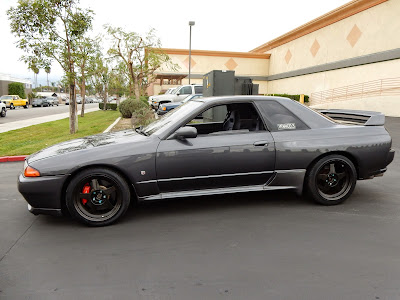 So let's start with the good points:
Now the bad:
And the middling:

So overall, it's a car that's best described as having potential. On the plus side I got it cheaper than what I know others have paid for other Nismos including ones with some even more questionable mods. Besides, I wanted a project car and this one is more than worthy of restoration. One by one I plan on tackling these issues and it'll be a long road ahead probably but I hope you'll keep following and watch as the progress unfolds. I'm sure there'll be good times and bad but hopefully the positive will outweigh the “what did I get myself into?” moments. At the very least, you can watch while I go into a full nervous breakdown.

Some of these issues I've already addressed and I'll post what's been done in the next Progress Bar article  (coming soon hopefully if I haven't had that nervous breakdown yet).