A question I often get asked and see a lot on the forums I go to is "Who are legit importers if I want to buy an R32?". If you've read my previous posts on the importation process and made up your mind that you want a nice piece of Japanese hotness you might be asking the same thing now. (Just make sure the Japanese hotness you want is a car, bro - 'cause this isn't an Asian online dating website). 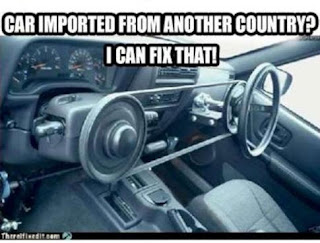 Before I give you a few names, let me clear up the sometimes confusing concept of registered importers (or RIs). It's a common misconception that any importer that wants to bring in a Skyline or other JDM car needs to be an RI. That's not the case. RIs are import companies that are certified with the government to perform modifications and process a car so that it complies with current NHTSA and EPA regulations. So they're really needed more for cars that are younger than 25 years old and so aren't exempt from those federal regulations.

You might be asking why then don't people use them to just bring in a fresh boatload of R34s like everyone wants and make mad profit? Well, that's a whole 'nother huge barrel of government monkeys but suffice it to say a metric $h*tton of cash would be involved plus more emissions and crash testing than even Ralph Nader would maintain sanity with. There's just too much needed (and no guarantee of success in the process) with not enough assured demand or profit for anyone to reattempt it like with Motorex before. especially now that R33s and R34s are pretty old cars that have been replaced by the much higher spec and readily available R35.

Getting back to Skyline importation, basically any company can bring in a 25 year old Skyline as long as they make sure to dot their I's, sign their x's, and spell Obama correctly. Even a private individual like you or me could do it but state regs usually require you to be in business as a dealer or importer to allow bringing in more than a couple of cars a year - so forget about any dreams you might have of a mail-order Skyline resale business run from your mother's basement. Besides, mom probably won't like the exhaust fumes from all those RBs slowly turning the basement into a Superfund toxic waste site.

And so, who are some good importers to buy from? Well, this will hardly be a comprehensive list because I only want to include ones that I've personally dealt with or have good info from other people on. Of course, I'm not going to guarantee your own purchase but at least you can have more peace of mind with these guys than a lot of others. Just know that for every legit Skyline importer there are probably 3 others who are shadier than your email friend who's Nigerian royalty and sells cheap Viagra.


Originally published this list in May of 2105 but updated and redid the entire post in July 2016 due to formatting issues with Blogger. I'll continue to add more companies as I get more reliable info.