In the first part of this article I talked about four limited edition Skylines that are the most well-known rare R32s. In this second half I'll tell you about two others that are far more obscure but are actually even fewer in number than the ones in the previous post.

The first is a regional variation – the ADM or Australian Direct Market R32. Australia was lucky to be the only market other than Japan where the R32 Skyline was sold officially. Before you say, "Nuh uh, Mr. Oliver, the UK got the Skyline too!" the Brits only started official importation of the Skyline with the R33. Nissan Australia wanted to capitalize on the success of the car in ATCC so 100 R32 GT-Rs were brought in and had certain changes made to conform to Australian standards of the time.


The mechanical bits were the same but certain aesthetic and functional changes were made:
There's a book called “Aussie Godzilla:The R32 GT-R Arrives Down Under” written by Damian Kringas which provides a fascinating look into this lesser-known aspect of Skyline lore. Australia had an interesting role in Skyline history and I'll be posting a book review later on with details on where to snag a copy if you're interested.


At this point I'd like to thank Skylines Australia member Aussie_Delivered_R32_GTR a.k.a. Bob for graciously allowing me to use his pictures to illustrate the ADM car. His car is an amazingly well-kept example of an R32 by the way even disregarding it's rarity.


The second obscure R32 is something really unique, a limited edition 4-door sedan instead of a GT-R.

A lot of car junkies recognize Nismo as Nissan's motorsports and tuning arm but most, even those that are Nissan fans, don't realize that Nissan actually has another official tuning and motorsports subsidiary – Autech. If you follow Super GT racing you might recognize the name because they do the tuning for the race engines on the GT500 Nissan race cars. In addition to that though Autech makes specially tuned versions of regular Nissan production cars.


One of these special versions was the Nissan Skyline Autech GTS-4, of which only 188 were made in 1992! These were truly unique cars. Despite being based on the 4-door body they had some styling cues added from the 2-door GT-R including a slightly wider rear end. They also had a naturally aspirated version of the legendary RB26 – labeled as the RB26DE instead of DETT of course – that produced a healthy 217 hp. For comparison, the GTS-T coupes had the RB20DE with 212 hp while the GT-Rs had 276hp (though that was really BS because of the “gentleman’s agreement” between Japanese manufacturers back then. Actual power figures for the GT-R were in the 300+ range).


In addition they were AWD instead of RWD, hence the GTS-4 designation, and only came with a 4-speed automatic. They also had some cool little details like a special "S/S" logo embossed in the front bumper and attached to the intake plenum. The logo stands for Shinichiro Sakurai, the engineer that designed the very first Skyline. Like other limited edition Japanese R32s, the Autech only came in the greyish green seen in the pictures. 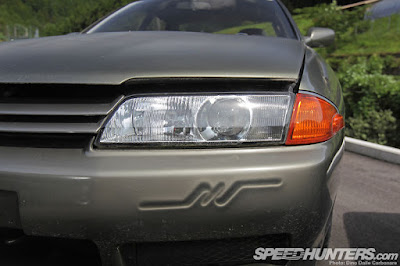 Given that most people want the GT-R and the 4-door R32 gets short shrift, your guess is as good as mine what these cars would be worth once eligible for the US – assuming you can find one! These cars are so esoteric that owning one in the States would be truly unique. You'd probably be more likely to see unicorn dung than an Autech GTS-4 here in the US. I think it would be an extremely cool car to own as a Skyline fan and it would be tempting to try and track one down if I didn't already have my Nismo GT-R.

And there you have it, a spotter's guide to the rarer breeds of Nissan's legendary R32 Skyline. If you've seen, or more amazingly, own one of these unique cars please shoot me a comment below. It'd be cool to hear your story.

NOTE: This article was updated May 25, 2020 to add subheadings for more clarity and this source list: