Okay, continuing on from my last post on interior removal, we'll tackle something that many of you will probably contemplate doing – removing the dash. The R32 dashboard is notorious for getting bubbles in the vinyl, and if you're even more unlucky it's also prone to previous owners haphazardly drilling holes in it to attach extra gauges and Hawaiian dancing girl figures.


The good news is that after removing my dash I solved both issues and rehabbed my dash to look better than new which I'll talk about in a later post.


There's already a very good DIY posted online about removing the dash and center console. Rather than trying to simply duplicate it I'm going to link to it here and then add some tips to clear up some stuff that wasn't discussed in detail in that guide.


That guide is very detailed and well illustrated but there are some sections that are glossed over a bit so let me try and help you out with those. Since my car's interior isn't all back together yet I can't offer you better pics for now anyway than what's in that guide.


First, let me tell you the tools you need:
Just to be clear, you don't have to follow my previous interior removal guide and take out the seats first if you simply want to remove the dash. You can leave them in place unless you're doing a full interior refurbishing like I did or you need to do something else with the seats like put in some fancy new Recaros and make a little bonfire with the old thrones.


Okay, so in the guide he starts off with the A-pillar trim, kick panels, and door sills removed already so let me discuss those in case you need help. The A-pillar trim is easy, they're just held in by clips on the back so you just carefully pry them out with your panel poppers and pull them off, starting at the rear portion.


The kick panels are also easy since they're just held in by two screws each.


The door sills should also be easy but can be a pain in the ass if anyone has messed with them before. They're each held in by five plastic retainers and the screws for those retainers can strip very easily. If someone has been ham-fisted with yours, pry up the door sill gently with a panel popper and that may give you enough traction to undo the screw or alternatively you can try to pry out the screw by jamming a small flathead screwdriver under the edge.


The inner weatherstrip lining the door doesn't need to be removed to take out the dash but if you need to for some other reason like repainting or if they're worn with age, they just pull off. 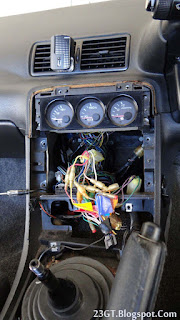 Another section that isn't detailed in the guide is the process of removing the center console bezel and the stereo, gauges, and AC module. In that guide he's working on a GTS-T without the triple gauges but the principle is the same. There are a bunch of connectors you have to undo and you have to be careful with some of them like with the cigarette lighter socket and the temperature sensor that's screwed on to the bezel. If you yank the bezel off haphazardly you can damage those connectors and it'll be time to break out the old wallet and buy replacements. This guide from SAU I've linked below covers the missing areas for the center console and it also mentions how the factory shift knob just unscrews off since he didn't remove his aftermarket knob in the first guide.


Once you get to the final two bolts on the top of the dash, those are hidden under a little plastic panel on the driver's side and by the sunload sensor on the passenger's. Those just come off easily with a panel popper. In the guide he uses a long socket extension to remove the bolts. You can also use a long phillips screwdriver but it's safer to use a socket when undoing the bolt. When reinstalling the dash, you may find it easier though to use the screwdriver to first tighten the bolt since you might need some pushing to get the dash back in proper position. With the screwdriver you can use one hand to keep the dash in the right position while the other holds the tool and tightens the bolt.


And just as a general tip, when doing something like this where you're removing something held in by a multitude of bolts and connectors, make sure to photo document the steps for future reference in case you forget where something goes. It's also helpful to keep the screws and bolt organized in plastic bags or trays labeled with the places where they go.


As a parting shot and teaser for a future post on my own dash renewal efforts, here's a pic of my own dash you can compare to the before image I posted at the start of the article to show you the nice new look it has. Come back in the future to see how this was achieved.

So, that concludes this part on removing the dash. Yeah, it's a ton of work. If you feel like doing more and want to turn your R32's interior into a bare shell with all the amenities of a cardboard box then stay tuned for the next part where I'll talk about removing the carpet and the rear portion of the interior.


Important disclaimer: Understand that working on your car can be inherently dangerous. This is meant to be a guide only and does not take the place of common sense and proper safety precautions. Only you can ensure your own safety. Know your limits and ask for qualified help if you're unsure of something. Every time you act stupid in the garage...God kills a Miata.