For my first R35 DIY on this blog I thought I'd post about a simple but necessary procedure that any owner can do themselves and be able to save a decent amount of money. This isn't the first R35 DIY guide I've made since I posted this one a long time ago on the GTRLife forum about swapping the front seats:

Eventually I plan on reposting that DIY seat guide here too in case anything happens to the original thread.

So, as for the subject of this DIY I'll be talking about how to swap the cabin microfilter. Nissan recommends this be done every 12 months or 12,000 miles but the dealerships charge up to $250 which is outrageous for a simple procedure that takes maybe 15 minutes to do – less if you've done it already and follow some of the tips I mention here. The filter itself costs only about 20 bucks whether you buy the OEM Nissan one or get one from online so having to pay 200 bucks more to put it in is asinine.

Why do you need to replace the cabin filter? Well, because after a while it gets plugged up with pollutants, dust, and evil spirits so if you don't replace it regularly your nice supercar is going to smell like a teenage boy's bedroom. If you like that smell then that's cool – I suggest you proceed to ignore this guide and toss a couple of old copies of Penthouse under the driver's seat for maximum authenticity.


So, what do you need to do this? Nothing much really:


First step is to open your passenger side door and open the glovebox. I won't bore you with the complicated steps necessary to do that. If you can't get past this step feel free to consult your dealer and have 250 bucks handy.

Having accomplished that difficult first procedure now you need to yank the glovebox out. Yes, I said yank. It's not screwed in and is just held on by some clips on the bottom so grab the base of the glovebox and give it a firm tug straight back and it should pop right out. By the way you may want to empty the glovebox first of the owner's manual, paperwork, and the old pigeon's nest that's no doubt in there just to make it easier on yourself and not make a mess.

After you yank the glovebox off it'll still be held on by the retractable cord that softens the glovebox opening so it feels all upscale-like and fancy and not like that rental Sentra you once got that just kind of fell open with a dull, cheap thunk. To take it off stick your flathead screwdriver into the gap just in front of the clip attaching it to the glovebox, twist it just a smidge, and the clip should pop right off.

What you ultimately want to do is remove the inner panel behind the glovebox to get to the cabin filter housing. Before removing that panel, pop off the triangular panel on the side of the dash. It's just clipped on so grab the the panel and pull it outwards and it'll come right off. 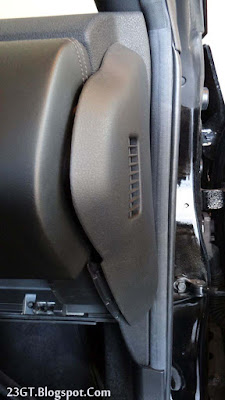 Now there's an older DIY on GTRLife that's very helpful but has some extra steps that aren't really necessary. It mentions removing the doorsill, the passenger side kick panel, and the panel on the underside of the right side dash. Those steps aren't needed – the glovebox, inner panel behind the glovebox, and dash side panel are all that's really necessary. In fact you could even argue the glovebox doesn't need removing but we'll talk about that in the next step.


Once you have the glovebox out of the way you'll see the inner panel I mentioned. It's held on by five Philips screws on the bottom, one in the middle, and four on top. The reason you removed the glovebox is to make it easy to access the two innermost screws on the bottom but you could conceivably detach the glovebox clips at the bottom, keep the cord in place, and then use a really short screwdriver like a ratcheting finger drive to undo the screws. Some people have had trouble with removing and replacing the cord so that's one option to save messing with it. I found the cord easy to deal with though so I recommend just removing the glovebox entirely like I outline here.


After undoing the screws you can now pop off the panel. Start at the top and just pull the panel off and it should hang down like in the pic below. It won't come off entirely because it's still attached by electrical cords but you'll have enough space to get to the filter housing. Don't be surprised if you have a lot fewer cords than in my picture – my car has had a couple of upgrades to the in-car electronics over the years hence the extra connectors.


When removing the panels make sure and pay attention to the little metal clips for the screws. They can easily fall out and if you lose them your screws won't hold. If they do fall out just find the tab they go onto and slide them back into place.


With the panel down you can see the white box for the filter off to the center of the dash. Find the tab on the side of the housing and pull it straight backwards just a little to unclip it.


Once it's unclipped, pull the cover straight out to the side. Don't try to twist it off or you'll break the two tabs on the inner end holding it in place.

With the cover off the filter is there for you to just yank out. It's just sitting there and not held in by anything so don't be shy.


The new filter goes in just by shoving it in the box. Just pay attention to the airflow arrow on the filter – it should point downwards since the air flows in from the top and out the bottom.


When you try to put the housing's cover back on it may not want to go in at first. That's because the filter actually sits in the top half of the box when closed and there are angled tabs on the back of the cover that keep it raised. If the cover doesn't want to go back on, lift the filter up a little so it's sitting at an angle and the tabs can then slide under. Slide the inner tabs back in, clip the outer locking tab into place, and your new filter will be nice and snug and happy.

To finish up you just reverse the steps. Pop the inner panel back on first and redo the screws. After that push the dash side panel back into place. Before you clip the glovebox back into place, pull the retracting cord all the way out as far as it can go. Hold the clip parallel to the side of the glovebox and push it straight into the hole it was attached to from the side. It should pop right in. Once the cord is back on just clip the glovebox back on its hinges. Finally, give yourself a pat on the back for completing this procedure – or have your girlfriend or wife do it if you can't reach back there.

So there you have it, you just helped keep your R35's cabin smelling fresh and new like the day it first rolled out of the plant in Tochigi and saved 200 bucks while doing so! Now if you found this guide helpful, please feel free to send the money you saved via Paypal to yours truly so I can afford to feed my car habit...and poor children in the third-world...yes, definitely to feed poor children. Not gonna use the money for anything else, no sir, not me.

Important disclaimer: Understand that working on your car can be inherently dangerous. This is meant to be a guide only and does not take the place of common sense and proper safety precautions. Only you can ensure your own safety and that of your car. Know your limits and ask for qualified help if you're unsure of something. Every time you act stupid in the garage...God kills a Miata.