You've survived the hellish ordeal of fitting the Nismo seat covers on the front seat, and now you're feeling up to finishing your labors by tackling the rear seat. Well, good news, the rear seats are nowhere near as hard. While the front seats can feel as labor intensive as Hercules cleaning the Augean Stables, the rear seat will be like scrubbing down your bathroom toilet bowl by comparison – still not particularly fun but much, much easier.

Before you begin, let me start off with a tip – inspect the metal frames of your backseat. Chances are good that 25 years of humidity and neglect have introduced the brown menace to your seat frames. No, not diarrhea bro, I'm talking about rust! Those seats didn't have the greatest rust protection so if your car's anything like mine the frame will have a nice patina of surface rust. Since you have the seats out anyway you might as well do some preventive maintenance. Take a steel brush and scrub the worst of it off and then apply a rust converting paint like Loctite Extend on the frame. After you're done the metal will be a much nicer looking shade of black and will hopefully weather the next 25 years better.

Okay, once the paint's dried it's time to tackle the covers. One indication of how much easier this is going to be is that you'll only need one tool this time – your official Nismo Pokey StickTM. You'll probably need a couple of small bungee cords too but I'll get to that later.

Following the same order as the manual, we'll do the bottom half of the rear seat first. Start by slipping the two metal hoops on the back of the seat cushion into the corresponding holes in the cover.

Once you have those in place wrap the edges of the cover around the cushion until everything is snug.

After doing that, flip the cushion over and start fastening the straps just like you did with the ones on the front seats.

When the straps are all snug grab the two ends of the drawstring that runs around the hem of the seat cover and pull them tight. Knot the ends together once you've got the cover drawn up fully. After tying mine I put a ziptie around the knot for added insurance. 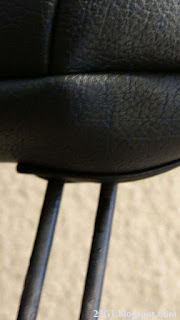 Next pull the edges of the cover around the backrest until they're all wrapped around.

Once the cover is wrapped around the backrest do up the four vertical straps and buckle them up like you did with the other pieces. Thread them underneath the metal rails instead of over them so that they don't chafe or snag on anything once it comes time to reinstall the seats.

With the four vertical straps in place it's time to do the four straps on the top corners. They simply wrap around the metal frame like in the picture below and get secured with velcro.

Now comes the one tricky part of the back seat covers. You'll find two elastic bands on the bottom corners of the cover. Remember those two small metal S-hooks included with the instructions and your NPS? The instructions say you're supposed to use the S-hooks to clip the two elastic bands to the metal frame. Well, I don't know if it was just a defect on my set of covers or they're all made improperly but the elastic on mine could only reach halfway to the nearest frame rail. Ain't no way the S-hooks were going to work without tearing the elastic right off the covers. So I devised an easy solution, I had a pair of small bungee straps lying around and I just used them to attach the elastic to the rails. Simples!


Now that you've got all the covers on it's time to throw them in the car. Just reverse the removal process and your interior will be looking much spiffier than before.

Oh, don't throw away your NPS after installing the covers by the way. You'll need it for one final job when you reinstall the back seat. The seatbelt receptacles have to be pulled through the holes in the bottom cushion and then you'll have to make sure the sleeves in the cover for them are snugly tucked into the channels in the cushion.

Once you return all your freshly covered seats your car will have gained oodles of extra Nismo – guaranteed to attract the opposite sex 60% of the time every time!

Important disclaimer: Understand that working on your car can be inherently dangerous. This is meant to be a guide only and does not take the place of common sense and proper safety precautions. Only you can ensure your own safety. Know your limits and ask for qualified help if you're unsure of something. Every time you act stupid in the garage...God kills a Miata.
Labels: DIY DIY-ATNTFIU GT-R Nismo Nissan Parts R32 Restoration Skyline