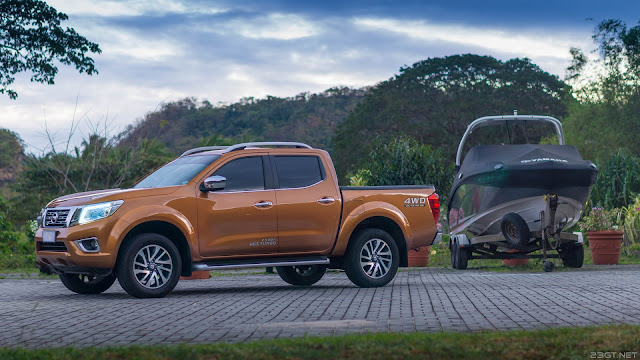 Yes, yes, it's another bloody truck. After the 2016 Nissan Titan XD, then the 2017 Armada Platinum, I'm reviewing yet another TRUCK. No, this isn't another April Fool's joke like last post. I know as a reader of 23GT.net you'd rather be reading about something sporty, with two-doors, that goes like stink to the twelfth power, but I gotta work with what I'm given and Nissan hasn't exactly been pumping out the new sports cars of late - to my eternal sadness. Do us all a favor and write to Nissan and tell them if they don't release the iDx stat and bring us some concrete news on the R36 GT-R that several Sentras will be harmed.

I tried writing to the head of Nismo in the US myself about the iDx ages ago and got an enthusiastic reply back but so far my ownership of a Nismo iDx is merely a figment of my imagination – just like my girlfriend who looks exactly like a younger Kate Beckinsale and has the same sexy British accent. Maybe a tidal wave of support from you wonderful people will work better than my lone voice so get to emailing or messaging or facetweeting or whatever you young folks do on your newfangled smartyphones right pronto.


But I digress. Today's subject is something we can't get here in the good old United States of Trumpistan but may soon be able to since rumor has it Nissan is getting tired of having the nasty schoolkids named Colorado and Tacoma perpetually stealing the denture money from the elderly and arthritic Frontier. Now that its much-hyped bigger brother the Titan has finished its debut, the Frontier supposedly is finally getting a way overdue replacement.


And that replacement is this – the Nissan Navara that's been available overseas for three years now while Americans have made do with leftovers. 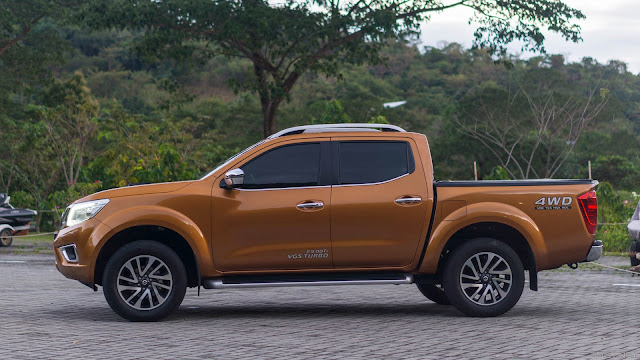 Handsome truck ain't it? It's a damn good one too if you're not one of those testosterone-infused jocks who insist the only truck worth having is a full-sized one big enough to exert it's own gravitational pull and suck in several minor planets. Need proof it's a good truck? Well, don't take just my word for it, take it from those German luxury meisters at Mercedes who deemed the Navara worthy enough that they asked Nissan to let them use it to make their very first proper pickup truck called the X-Class.


Check that sucker out. A Mercedes pickup truck - what a crazy world we live in. What's next? Outhouses that are in the house and have running water?


I got the chance to drive the Navara for an extended period while I was on my recent trip back to the Philippines. It just so happened my family back there wanted to pick up a new second vehicle - either an SUV or a pickup because of the often crappy roads and frequent flooding back there. As I've mentioned before my family have been Nissan loyalists since I was a kid but the company went through a bad spell in the Philippines during the early 2000s where the local distributor had a dismal lineup and the marketing skills of a doped-up howler monkey. Because of that despite our Nissan favoritism our family hadn't actually owned a Nissan in the Philippines for over a decade. Thankfully the past couple of years have seen massive changes at Nissan Philippines and the brand is now aggressively trying to rekindle the respect that made it one of the best-loved car brands in the country previously. 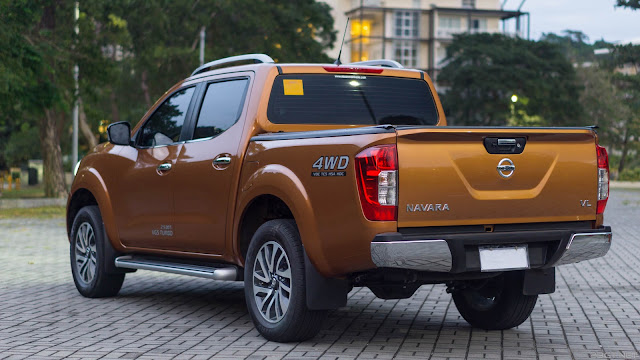 One of the most important pieces in that plan is the Navara mid-size pickup. Mid-size diesel pickups are big business in the Philippines where they're well-suited to hauling the typical extended Filipino family and all their crap over often potholed and rutted roads while delivering decent fuel economy – and being pickups they have the added bonus of exuding the masculine image that the average Filipino male is so desperate to portray.


Unlike here in the States where the mid-size pickup market has withered thanks to the never-ending popularity of their full-size brethren, the competition in the Philippines is fierce. Ford recently launched a new Ranger, Chevy has their Colorado, Toyota has the supposedly unkillable (and terrorist-favored) Hilux, Mitsubishi has their Strada, while lesser players like Isuzu, Mazda, and Chinese brands like Foton are also in the mix. Full-size trucks on the other hand are a rare sight since their large size is unwieldy in thick traffic and tight local roads and their gas engines would threaten bankruptcy for the average Filipino driver. In short, the Philippine market is a veritable midsize pickup-truck Fight Club where the weak get singled out and become sales pariahs fit only for the desperate and deranged. 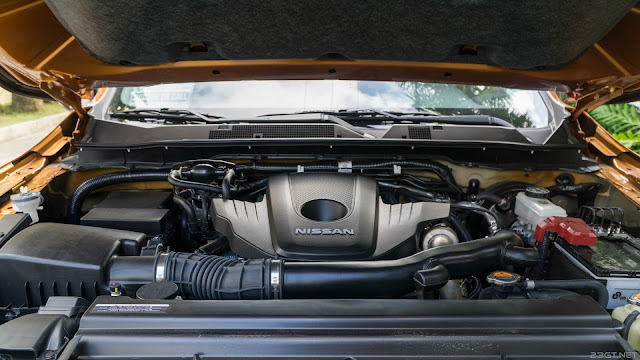 To survive in such a competitive market Nissan had to draw on their long experience making hardy trucks and the Navara comes well-equipped to handle the Philippines' rough roads and rougher drivers by having a fully-boxed frame underneath like its bigger brother the Titan. Getting that sturdy frame up to speed is a cinch with the 2.5 liter variable-geometry turbo inline-4 diesel motor up front. In top of the line VL 4x4 trim it chugs out 187 horsepower and a very healthy 331 pound feet of torque. Now, those numbers aren't quite top of the class in the local pickup market but it's very competitive – only the Colorado and Ranger have a slight edge while the others are less powerful. Crucially that power is sent out in a very linear fashion with no perceptible lag like some of its competition. That smooth power delivery made the Navara a great tool for the cut-and-thrust overtaking that's the norm in the Wild West traffic of Manila. Where other diesel four-bangers – like the one in our family's Mitsubishi Montero Sport – have a perceptible lag you have to account for when gunning for a vital gap the Navara just has a continuous climb in power. 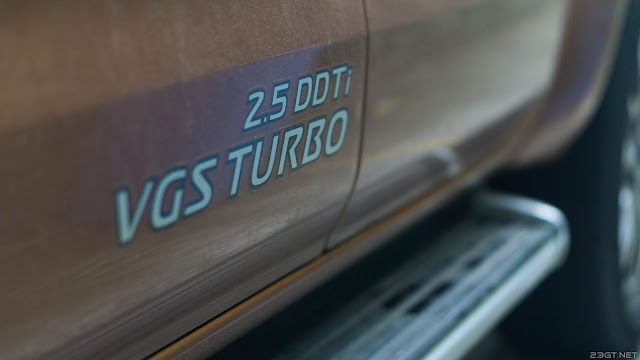 Helping with that smooth power delivery is the seven-speed automatic that's an improvement over the five-speed in the old Frontier and puts the Navara ahead of the competition that have six or five-speed boxes. Off-road aficionados will probably be jonesing for the six-speed stick that's also offered as an alternative but it'll surely never make it to these shores even if the Navara eventually arrives as the next Frontier.


A stick may be great for rock-crawling but for dodging insane motorcycle riders and killer jeepneys the smooth-shifting auto was a far better choice. Speaking of smooth, that's probably the Navara's biggest ace versus the competition. Pickups (and many older body-on-frame SUVs) traditionally come with leaf-springs in the rear – great for hauling a load of cinder blocks, a year's worth of rice, or (if you're the local police) a collection of freshly-executed drug dealers, but piss-poor at pleasing sensitive tushies when there's no large weight to settle the truck's rear end. To give the Navara better handling and a more car-like ride Nissan opted for a more sophisticated multi-link rear suspension. This makes the Navara unique in its class and gives it manners more like a family sedan (a tall and longish one) than a rough-and-ready truck. 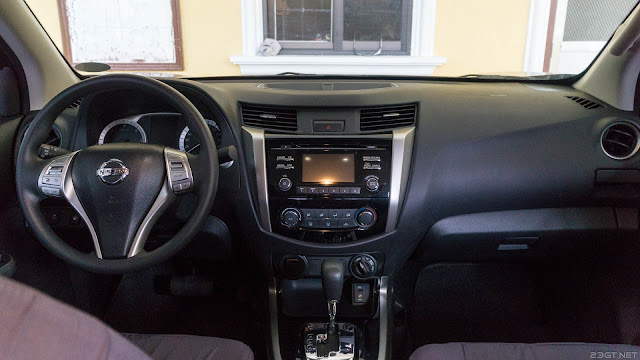 The interior's sedan-like as well with soft-touch plastics, some nice piano black and silver accents in line with other modern Nissans, and the company's much-touted “Zero Gravity Seats”. Rear passengers get adequate legroom for the average Asian but longer-limbed Americans will probably feel a little cramped - no more than its competition though. At least you can keep cool with the rear AC vents. 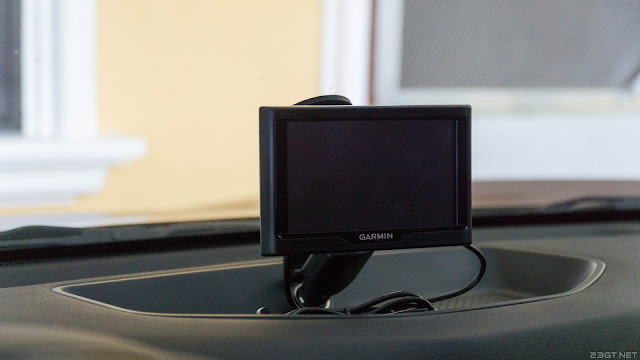 A nice touch on the dash was the inclusion of a second power socket in the central bin on top. This is perfect for powering a portable GPS unit or smartphone in nav mode. The dash itself is up-to-date with other current Nissans by having the now de riguer central instrument panel MFD and another small LCD display in the center console for the audio system and backup camera. 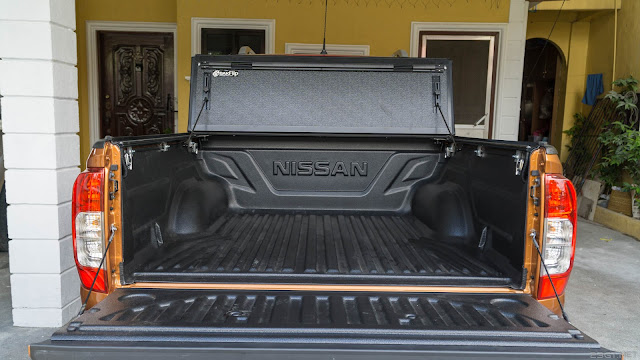 Out back in the all-important bed area is a nice plastic bedliner with sturdy folding tie-downs. The tailgate sports a plastic cap for protection and a central release handle that neatly integrates the backup camera. 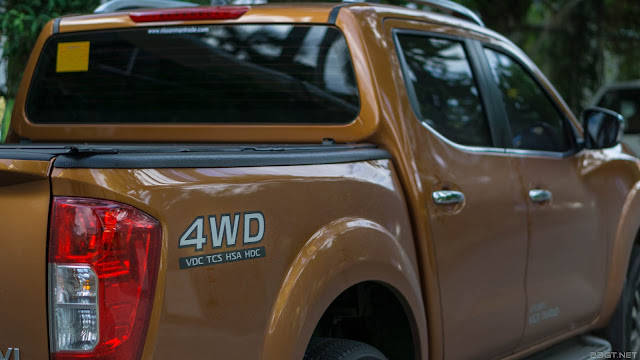 The Navara also comes with a gamut of the current techno doodads that populate modern vehicles - and it's not shy about pointing that out with some large decals. Vehicle Dynamic Control is present as well as Traction Control, Hill Start Assist, and Hill Descent Control. Some of the more recent safety tech like Lane Departure Warning, Moving Object Detection, and so forth haven't made the list but I certainly didn't miss them while driving in Mad Max country (i.e. Philippine roads) but I did find myself wanting Nissan's excellent Around View Monitor especially in the tight parking spaces of Manila.The Navara at least compensated by having good visibility - a nice break from the sports cars I'm more used to. 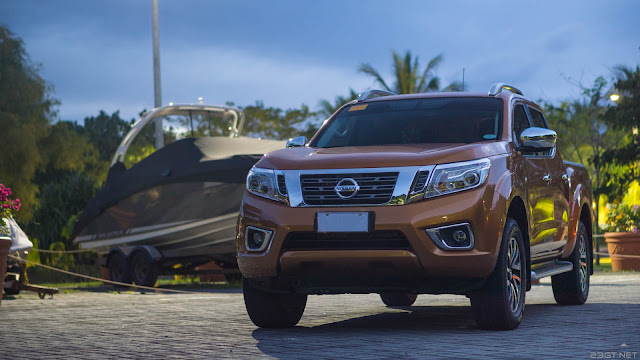 The exterior styling hits a nice middle-ground by being tastefully subdued without lacking some of the muscular flourishes that are expected of a modern pickup. Overall, it's a much more nicely-executed and distinctly Nissan design than the blandly unoriginal current-generation Titan. Spring for the range-topping VL model like this one and you get some very modern LED headlights embellished with the angular LED DRL's that are now a trademark of Nissan's truck and SUV line. 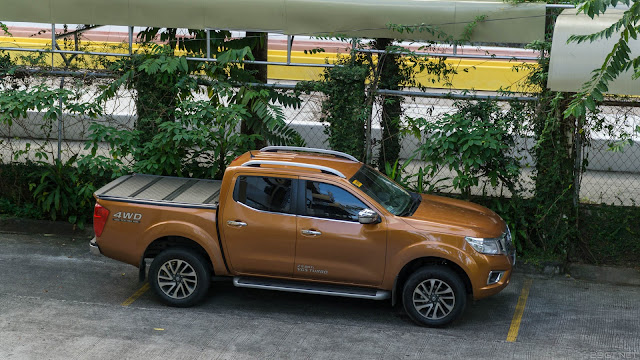 With good looks, a sturdy motor, and best-in-class dynamics the Navara is understandably selling well in the Philippines. We took ours for an extended trip around the central part of the country and were happy to see plenty of others on the road – a good sign that Nissan is well on its way to rehabilitating its tarnished image in the country. Hopefully the rumors I've heard are true and Nissan USA will decide to bring the Navara over as the new Frontier and inject some fresh blood into the stagnant US mid-size truck segment. Now, about those sports cars, Nissan...