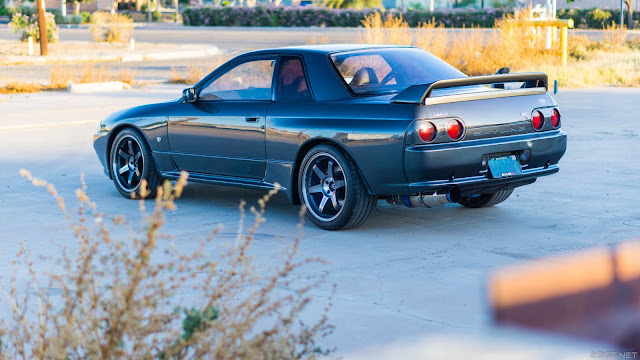 It's been a long time since I did a proper update on my Nismo R32 project – over two years actually. Some of you probably started wondering if I'd given up on it but as I mentioned in my four year anniversary post that wasn't the case and I kept slowly progressing on things as time and funds allowed. 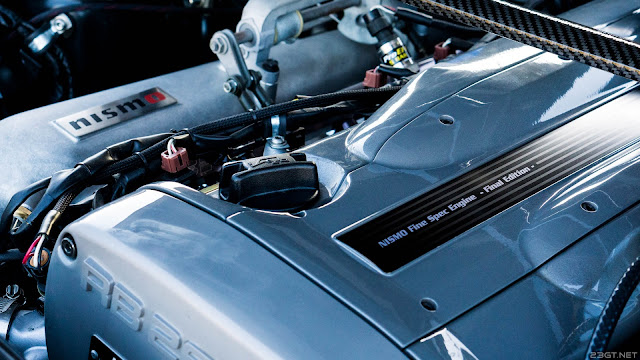 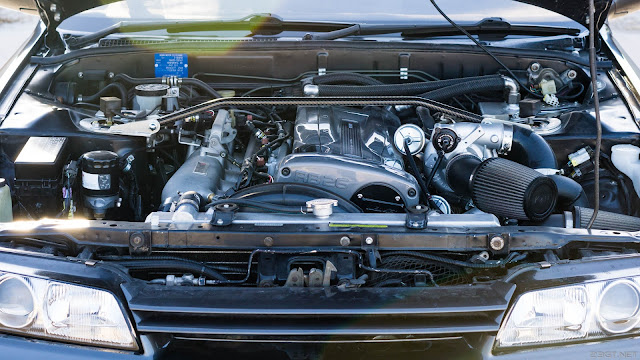 The biggest milestone was the completion of the engine work at Black Market Racing in Phoenix. As you can see from the dyno sheet below she put out a pretty stout 517 whp – when I saw the result I borrowed a line from the farmer in “Babe” and said “That'll do.” Although unlike him I had a big, shit-eating grin on my face when I said it. 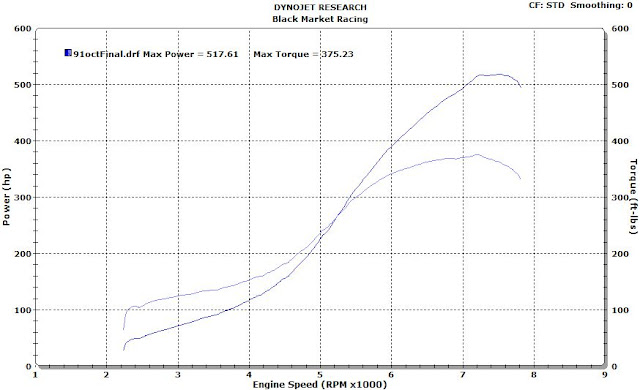 There was still a lot left to finish up, mainly on the interior, but at least the car was now driveable and able to make “vroom-vroom” noises on its own instead of just in my head. The first order of business was to pick her up from Black Market and take the 200 mile trip back home to Yuma. I didn't want to put my newly-installed engine through 4 hours of endless highway driving so I broke out my trusty Armada then rounded up three friends and a U-Haul car trailer one Saturday morning in April of last year. 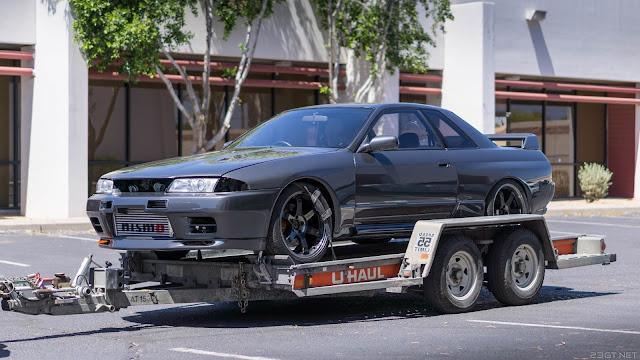 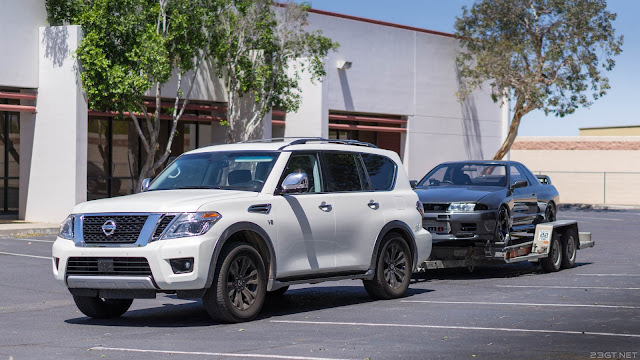 The loading was a bit nerve-wracking since this was the first time I was driving the car again after years of inactivity but eventually we got her squared away. Top tip for you guys if you ever want to use a U-Haul trailer for your R32 – bring two low-profile ramps to extend the ones on the trailer and then put some planks under the front tires so the nose doesn't scrape. As an extra precaution we used a pair of Vulcan car tie-downs on the rear wheels since the U-Haul trailer only has straps for the front wheels. The trailer also has a chain for the rear but it looked about as elegant and safe as a Tijuana brothel so we just stowed it and wiped it from our memories.

Immediately after getting her back home there wasn't much progress made because I left overseas again for a few weeks and after I got back the scorching Arizona summer had started to set in and unfortunately the AC was on the fritz so I tucked her away in storage for a while. In the meantime I had to tackle the biggest roadblock to putting the interior completely back together – the dash.

If you've been following the build since the early days you might recall that I'd totally stripped the interior and had the dash reupholstered in leather to fix the ubiquitous bubble issue and cover up the ugly ass holes that had been drilled by the previous owner to mount gauges. I'd bought the leather from a company in the UK that had precisely cut and stitched it for an R32 dash. Unfortunately in retrospect they cut it a little bit too precisely. My upholsterer got it to fit and look good but it took a lot of work since the leather had been cut to the exact size of the dash with no extra material to spare.

This turned out to be an issue later on when the new dash had its first taste of Arizona heat. The leather ended up shrinking and warping until it had the smooth complexion of Frankenstein's monster: 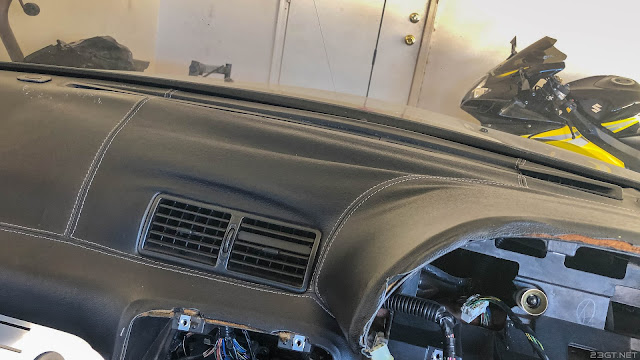 After all that work before of stripping and reassembling the dash I was forced to do it all over again. This time I decided to have my upholsterer start from scratch and source the leather himself. I didn't want the car to go back to paperweight status while the dash was redone so I found a used dash for cheap and had that fixed up while the old ugly dash stayed in the car.

Once the colder weather of fall came around my friends and I started throwing more missing bits back on such as the front grille, the front turn signals, the fender liners, the front undertray and so on. The dash upholstery got done around November but I couldn't get a friend to help me swap the dash until December. Just before Christmas though I had the interior finally all buttoned back up and I thought it looked mighty fine after all was said and done. 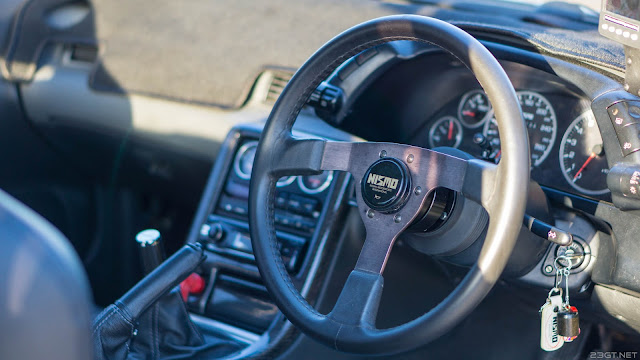 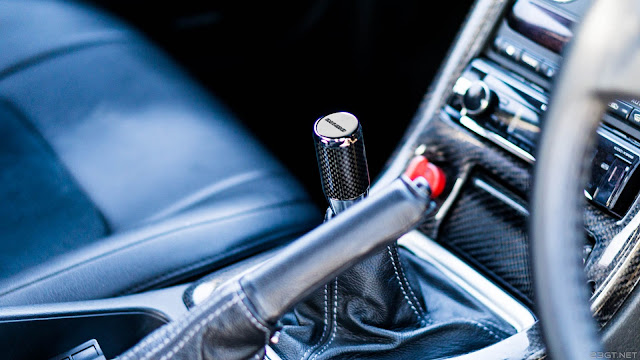 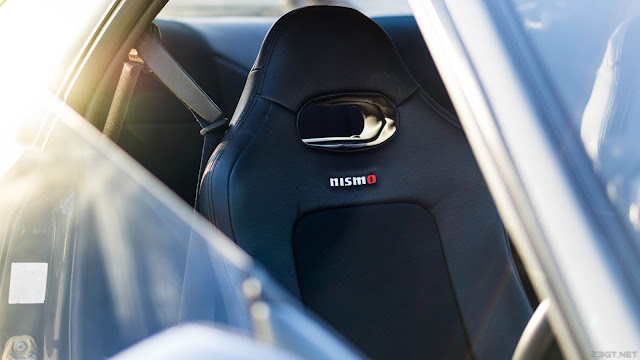 For extra insurance against the Arizona heat cooking the leather again I bought a dash mat – despite the fact I usually hate how they look. I didn't attach it to the dash though so I could easily pull it off if I wanted to show off the bare leather. It stays in place reasonably well even without tape and if you're wanting one yourself just go to eBay and search for R32 dash mats. A seller called fitmycar sells these from Australia and the brand is Protectomat. The quality looks good and it was only 80 bucks. Unfortunately I forgot to get a decent photo when I did the shoot so I'll have to give you guys a peek of the mat and the new leather another time. 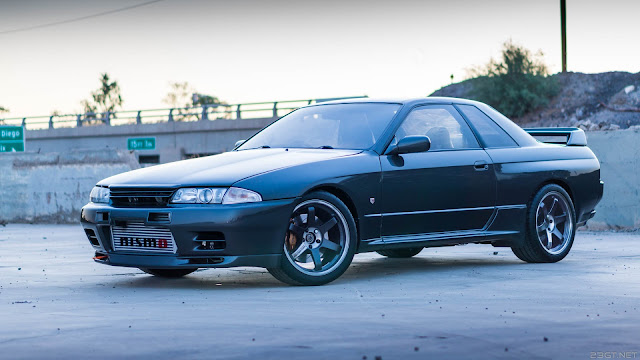 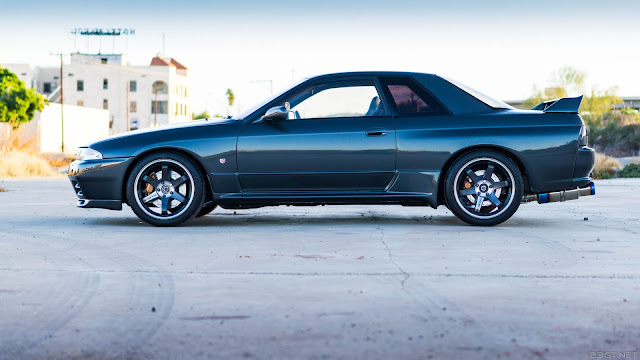 Oh, one other thing that threw a wrench in my plans to finally enjoy the car was the speedometer cable breaking. If you're not already aware the speedo cable is a notorious weak point on the R32 since Nissan oddly thought that a piece of plastic would have no issues surviving on the end of a metal cable after being spun at thousands of revolutions for years on end. Needless to say the bloody thing has a habit of breaking at the worst of times. Mine broke while I was fighting off ninjas hired by the Istanbul Continental after I refused to kill the innocent daughter of a Mexican druglord...or maybe it happened right after the engine work was done. Who knows? The mind gets fuzzy after a few drinks.

Anyway, I went off overseas again for New Year's but as soon as I got back the speedo cable was replaced. Since the car had a stand-alone ProEFI ECU and I used a speedo app on my phone anyway to get those all-important miglia all'ora I could drive it just fine without the speedo but I didn't want the odo to be inaccurate for too long. 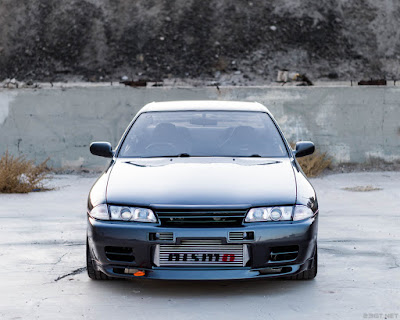 Last major item to get done was getting my new carbon hood installed. I was hoping the hood would add some nice visual pizzazz to the car but sadly in most lights the carbon fiber just blends in with the grey of the rest of the car. Thankfully I already had a plan to spice up the car's looks but the stuff I ordered seems to have shipped on the slowest boat possible from overseas and has yet to arrive.

And so my R32 is back to drivable status after a gestation period verging on Duke Nukem Forever levels. The saga's not over though since there are still some finishing touches to take care of, particularly fixing the broken air conditioning – a trivial thing to some of you living in more northern climes but a real lifesaver when you live in a place where even Lucifer is afraid to visit during the summer. At least now I can call the remaining tasks finishing touches without feeling like I'm lying to myself. 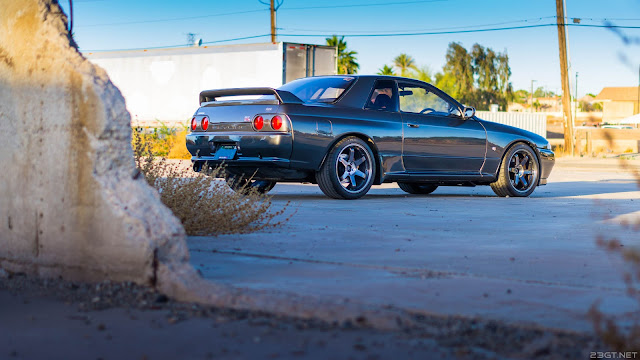 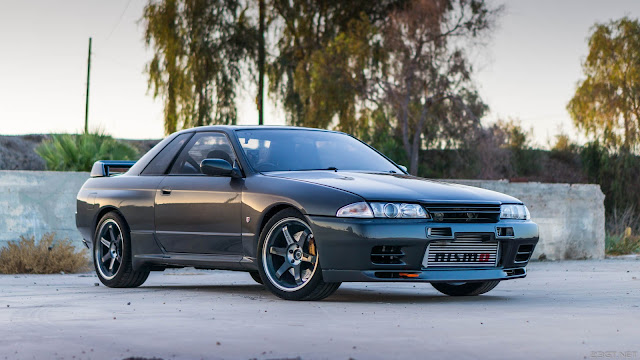 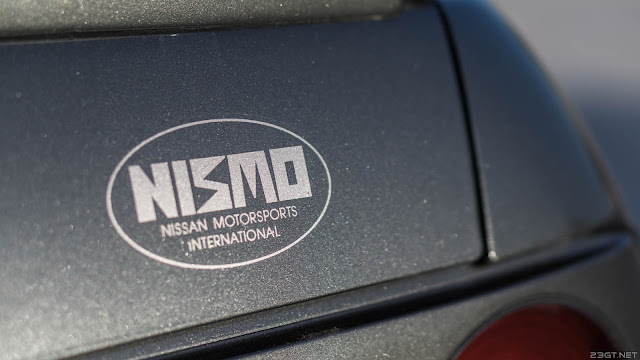 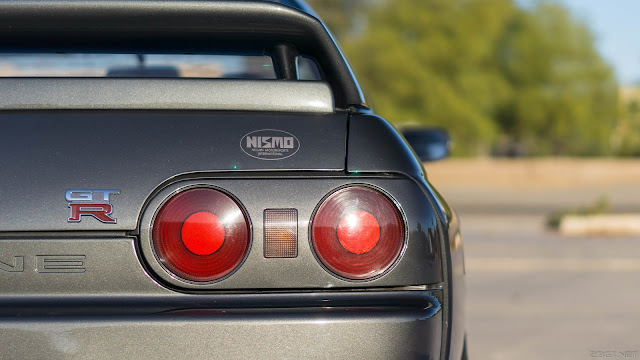 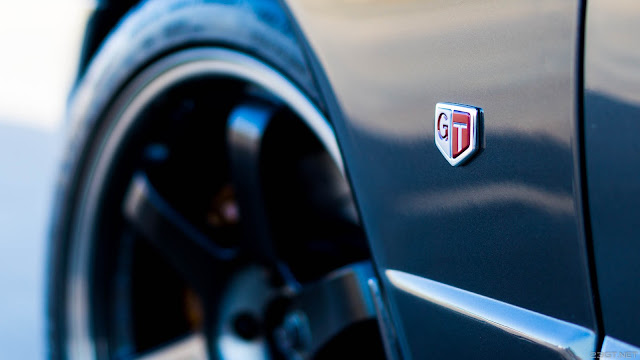 Until next time, drive safe everybody!