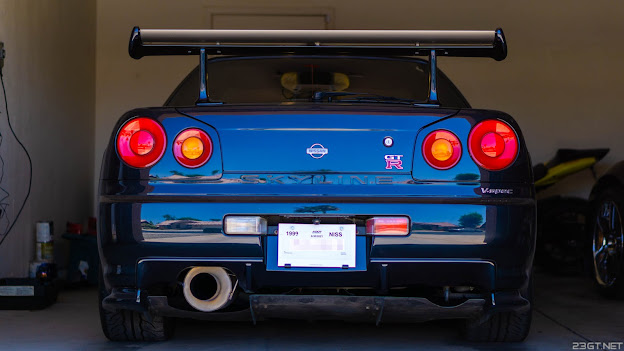 Happy Fourth of July everybody or as I prefer to say it given the arrival of my new baby, happy Thirty-fourth of July! Hope you're all staying safe out there!
I've mentioned many times on this blog how there are two important ingredients to having a fully-legal JDM import - being federally legal and being state legal. Unfortunately too many eager owners try to skip the first one and only get the second one which can result in a perfectly fine automobile getting crushed, or shipped out of the country to fend for itself on the harsh streets of some faraway land.
To realize my dream of owning an R34 GT-R in the US of A I wanted to do it the fully legit way and get both requirements taken care of correctly - partly because it's simply the right thing to do but also because it would allow me to keep sharing stories of my love affair with these cars to you dear readers without worrying about a SWAT team coming into my house and disrespecting my whole family after I narc'ed myself out on the internets.
I expected getting the federal approval to be a big job and it was, however since I'd already dealt with the ordeal of getting my R32 registered five years ago I figured once Uncle Sam agreed to let my car in the worst would be over and that I knew what to expect at the Arizona Motor Vehicle Department.
Well, I was wrong. Arizona decided to throw me a curve ball and despite being able to prove that my car had entered the country legally they told me at first that I might not be able to register my R34 after all. Oh, so I won't be able to drive it on public roads? I guess that means I just paid an insane amount of money for a 1:1 scale model of a Nissan Skyline R34 GT-R! That's cool. It's all good. NOT!
What was the issue? Apparently Arizona law states that to issue a title to a car it has to meet Federal Motor Vehicle Safety Standards (FMVSS) either when it was made or it has to have been modified later on to do so. Only cars 25 years of age or older are exempt from that. My R34 hasn't been modified to meet FMVSS nor is it over 25 but you may recall that the whole purpose of my Show or Display application was so that the US Department of Transportation could say that my car was okay to enter the country WITHOUT having to comply with FMVSS and I had a letter stating that.
Logically you would think that having that letter should have been my "Get out of jail free" card for that state requirement. As you might know though, government affairs are often dictated by their own logic.
After consulting with the DOT legal department the MVD told me that they had to adhere to the letter of the law and they wouldn't be able to let me title the car in Arizona unless it was either modified to meet FMVSS or it turned 25 years old BUT to their credit they did come up with a compromise: I could register the R34 just like any other normal car and therefore drive it on the roads (up to the 2500 mile a year limit set by DOT of course) but I just couldn't get an Arizona title. Until the car turned 25 the old Canadian registration that had been signed over to me and my Bill of Sale would have to serve as my proof of ownership, but once 2024 arrives I could then get a title like normal.
Yeah, that all sounds weird but I was fine with that compromise. I didn't need a title anyway since the car doesn't have a lien and I don't plan on selling it so just having a registration to let me drive it is more than enough. Crisis averted!
Before I could get to the final step of registration though I had to go through the normal Arizona procedure for registering a foreign import. That starts with a level II inspection by Arizona DOT police. For that I had to drive down to our local commercial port of entry at the US-Mexico border where the inspection station was located.
It was a long three week wait for the inspection appointment after hearing from MVD that I could register the car after all, but last week I finally made the 25 mile trip to the inspection station. 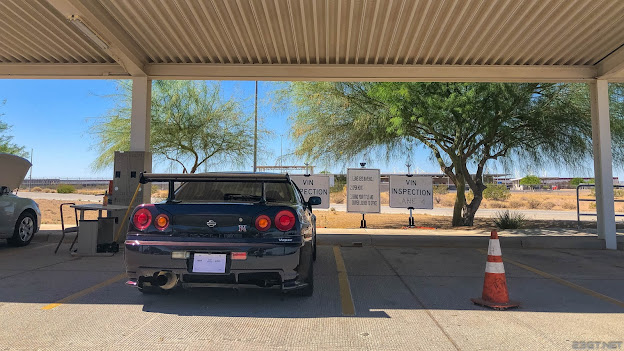 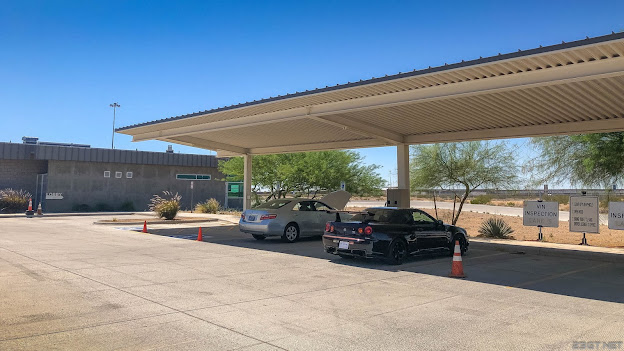 Yes, the irony was not lost on me that after shipping my car all the way from the Canadian border I now found myself at the Mexican border to finish her immigration process. It's a weird world I tell ya. 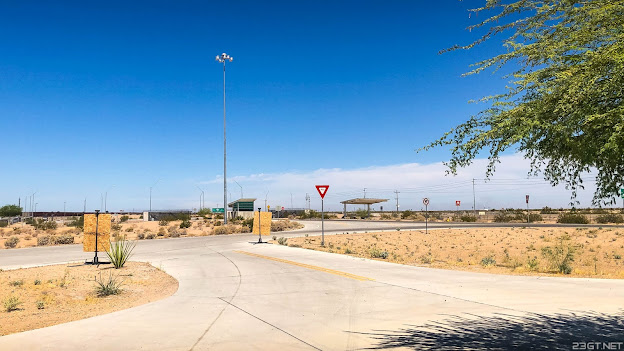 We were so close to the border you could actually see our el presidente's beloved wall within walking distance of the inspection site.
The inspection itself was pleasantly uneventful just like the last one I did for the R32. The main purpose of the inspection after all for a JDM car is just for someone more qualified than a regular MVD clerk to confirm the serial numbers on the vehicle match the documents and that the car doesn't appear to be a rolling deathtrap just waiting to smoosh unsuspecting children, elderly, and domestic animals. Also just like with the R32 the DOT officer was curious about the car and asked a bunch of questions about it. Chatting actually took more time than the inspection but I'm always happy to spread the word about these awesome cars so that was all good.
After getting my completed Level II inspection form I then had to wait another week for an appointment with the MVD office again. With COVID continuing to make things complicated everything has to be done by appointment at Arizona's DMV now and it can take 3-4 weeks to get a slot so I had booked mine well in advance as soon as I knew when I could get my inspection done.
Thankfully getting the registration from MVD was quick and fairly painless. After paying my fee I was out of there with the temporary paper plate you can see in the picture at the top of this post. I still have to wait about a month for the actual metal plate to arrive in the mail but basically now my car has fully completed its immigration process! Hooray and welcome to your new official home country Astrid!
Oh, but while I was waiting for those appointments I kept busy by taking care of a few other things. Astrid had a few important things missing when I got her down from Canada. You may recall the front lip wasn't installed but she was also missing her original Nissan and V-spec badging on the back. 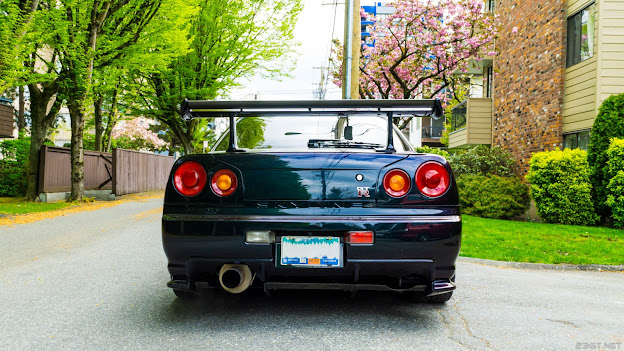 You can clearly see how the badges are missing here in this shot from when I first test drove her in Vancouver. As a proud Nissan fan I wanted the company logo back on the car so I sourced new badges right after I bought her and while I was waiting to complete the registration process I took her to a friend at a local body shop and had them reinstall the front lip, restore the missing badges, and replace the front GT-R badge with a new one I got to replace the chipped original.
The results of the new additions can be appreciated in the photoshoot I recently did and posted here. I also decided to indulge my anime geek side by plopping one of these floormats in the passenger side footwell. My cousin Patrick is living his dream and building up his own car-lifestyle brand in Japan called Ovrdue and these floormats were a limited release collaboration between him and Nohype.jp. I wanted to show some support for my cousin as he keeps chasing his goals so I picked up a set while they were still available...bah, who am I kidding, I  really got them because of the hot image of Hestia that they used. (Sorry Patrick. Hey, you got some money out of the sale so no angry Messenger DM's in the middle of the night!)
If you want to show some love to a young car nut who's working hard to build his own business from the ground up please check out his website (Fair warning though, there is a lot of stance beyond that link so avert your eyes if you're not into that scene!):
https://ovrdue.com/
And that's pretty much how the first month and a half of my stateside R34 GT-R ownership experience has gone. Oh, I forgot to mention that I picked up a stalker one time who tried to follow me all the way to my house. I don't mind gawkers but in today's times, it doesn't exactly give you the warm and fuzzies when someones tries to tail you straight to your front door. So sorry unknown Scion driver, had to give you the slip!
Now that registration is taken care of I can try to enjoy the car a bit more normally - or at least as normal as COVID will let me since car meets are still shut down. Astrid's going to get dolled up even more in the coming months though so please keep checking back here! Until next time, drive safe!
Labels: Anime Astrid GT-R Importation Nissan Project Astrid R34 R34 ownership Rare GT-Rs Rare Skylines Registration Skyline