The Show or Display Import Law for Dummies Part 2.1: Speedhunting 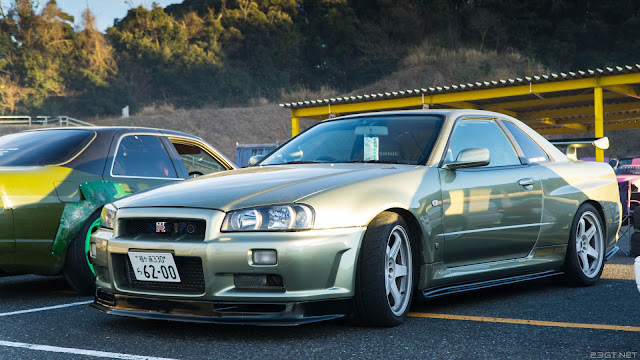 The next installment of my Show or Display guide was supposed to be about the process to bring a car into the US once you had it approved by NHTSA however I suddenly realized that I'd been remiss in my part 2 article and actually forgotten to mention where you could look for an MP2 or M-Spec Nur R34 to import! My sincere apologies for that error and you can rest assured the trained squirrel monkeys I use to ghostwrite for this blog have been thoroughly chastised and their daily banana allowance has been reduced to ensure the little furballs never screw up like that again.

Anyway, if you're in the market for an R34 of your own – either to import through Show or Display or store away for later entry – or you're just curious where people are digging up these rare cars, then please do read on.

The most obvious place to score a used JDM car is still the Japanese auctions. If you've never been exposed to the fascinating world of Japanese used car auctions it's worth reading this old article I wrote a long time ago about them. Although many R34s have been sold and exported out of Japan by now there are still a lot floating around over there and occasionally one of the rare special editions will still show up at auction. Nowadays though the prices are much higher than before thanks to the spike in prices driven by the US market since it opened up to R32 and R33 importation.

For something as rare as an MP2 or M-Spec Nur though, you want to cast your net as far as possible in the effort to find one. Aside from the auctions you can contact the various Japanese exporters that specialize in JDM performance cars like JDM Expo and Trust Kikaku. JDM Expo actually found an MP2 when I told them I was in the market but I went with the one I found in Canada instead because it was simply easier logistically to import the car that was just across the border rather than an alternative that's half a world away. That M-Spec Nur in the video above is actually still listed as available on their website. It's fairly high mileage but apparently well-kept so if you're in the market for one but don't want to pay the $200K or more that the low-mileage examples are asking for then that car may be your new Japanese girlfriend-to-be.

If you have friends or other contacts in Japan you can also try to find one for sale from a used car dealer over there like Global Auto. Global Auto has a reputation for stocking some of the best examples of second-hand Japanese performance cars in all of the Land of The Rising Sun. In fact, my car was originally bought from there by the previous owner and I was recently contacted by someone who just bought an M-Spec Nur from them that's going to be stored for future import once it turns 21. The car in the pic above was a Midnight Purple 2 that Global Auto offered for sale a couple of years ago - unfortunately it wasn't a V-spec and hence not eligible for Show or Display. Still a great-looking car though with some very choice mods.

Prospective American owners don't have to restrict themselves to the mother country of Nippon however. A great source of potentially importable cars is our northern neighbor Canada – land of friendly people and where Dunkin Donuts stores cosplay as Tim Hortons. Since the Canadians have a 15 year import cutoff instead of our dumb 25 year one they've been free to hijack R34s from their poor Japanese owners for 6 years now. If you keep an eye on the classifieds and owner's groups in the Land Up Yonder you might luck out and find one like I did – although in my case it was an American friend of the owner in Canada that gave me the tip.

And don't forget other countries that have had the privilege of R34 companionship well before Americaland. Australia and New Zealand are logical places to keep an eye on since they drive on the wrong side of the road just like Japan does (That's just a joke by the way, readers from the antipodes :) ). Both countries also have very devoted communities of owners so going to places like the Skylines Australia forum might pay off eventually. As much as the Aussies and Kiwis love their Skylines many have been tempted to offload them on Yankees who are willing to throw money at them to have a taste of once forbidden fruit. GTR-Registry posted the one in the image above for sale last year and it was snapped up by an eager American buyer to get shipped out from Middle Earth.

Closer to home you have our former colonial masters in the UK. The fellow MP2 owner that helped me with my insurance conundrum actually got his from Harlow Jap Autos over there. HJA is one of the best known JDM importers in Britain and taking a look at their selection of cars is guaranteed to leave any import car fetishist drooling. You might also find a potential purchase by lurking in forums like GTR.co.uk.

Speaking of forums, being active in the Skyline and GT-R community pays huge dividends when it comes to finding leads for such rare cars as Show or Display-eligible Skylines. I'm currently helping someone from GTRLife – the most popular US forum in the States – with his MP2 R34 that is coming in from the Middle East. And I met the guy who tipped me off to my car thanks to that same forum so don't be a loner, get involved in the community, network, make some new gearhead friends, and they might very well help you seal the deal on your dream car!

Lastly, if all of that sounds like too much work and you happen to have millions in disposable income from TSLA shares, drug running, or that settlement you got when you accidentally fell into the wax vat at the crayon factory, you can always just hire somebody here in the States to track a car down for you and bring it in. Companies like Toprank Importers in California are always ready to help the well-heeled fulfill their JDM desires.

Finding that rare gem yourself though has an appeal that any enthusiast can relate to so if you're willing to put in the legwork I hope the above information inspires you to start the hunt for your own dream car. Best of luck in your search!