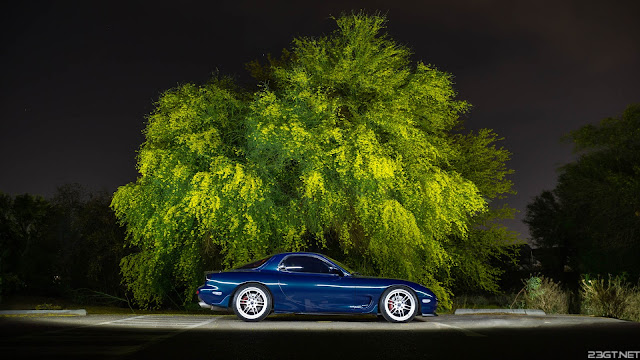 It's been some time since I posted about a photoshoot for one of my friends – it's been over two years in fact when I shot some farewell pics of my friend Robert's BMW M3. Of course, a certain little illness put a huge damper on many activities for much of that time but this particular shoot is long overdue since it's for my very helpful friend Sam.

COVID wasn't the only reason however for this shoot being overdue. Sam actually had a super clean Scion FR-S years ago and I had offered to take pictures of it but sadly the fickle car gods had other ideas and the day before the shoot he had a bad accident. Thankfully he and his son were fine but the car was totaled.

Also thankfully, the loss of his beloved FR-S didn't forever ruin his enthusiasm for things automotive and Sam would later pick up a new project car in the form of this Montego Blue FD RX-7. This particular rotary is actually a family heirloom of sorts since his dad owned it originally with Sam picking up the torch in 2019.

For JDM car fans the third-generation, or FD, Mazda RX-7 needs no introduction – but I'll do one anyway since this wouldn't be much of a car blog if I didn't ceaselessly talk about cars. Anyway, the FD has become legendary among not just import circles but sports car enthusiasts in general because of its phenomenal handling thanks to a great chassis and light weight. The sequentially turbocharged 13B rotary under the hood may not post earth-shattering power numbers but it doesn't have to with the car's relative lack of mass compared to rivals of the period. Rev it to its glorious 8000 rpm redline and give it full send through a curve and the FD will have you grinning until the cops stop you to check if you're high. From the car maybe, but not recreational pharmaceuticals hopefully. 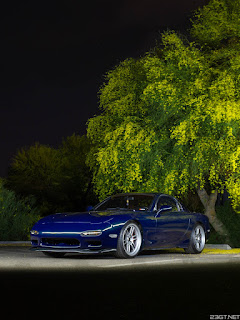 All of those mechanical bits are wrapped up in one of the sexiest bodies to ever leave a car factory. Three decades on and the third-gen RX-7 is still so hot it would have an Onlyfans account if it were human.

It's one of the few cars I would certainly go straight out and buy if I had the extra cash and storage space. That's high praise from a Nissan cultist and GT-R obsessive like your's truly!

Sam's car in particular had some light mods from its previous ownership but new management called for some more modern and extensive touches. For a start the old wheels were swapped for Enkei's classic RPF1 in an ample 18-inch size. Apexi coilovers plus some other suspension upgrades give it a great stance. A Power FC, titanium exhaust, cooling upgrades, and a variety of other bolt-ons up the juice from the stock 255 horsepower but sadly Sam hasn't had a chance to dyno his car to see exactly how many more ponies have gotten stabled under the hood.

Since the FD is about as JDM as it gets a shoot among some lovely cherry blossoms would have been perfect – except we don't have them here in the Southwest desert. A good photographer makes do with what he has though and what we have is some lovely Palo Verde trees all bursting in flowers for the spring. Against the yellow blooms the RX's Montego Blue paint makes a nice contrast, and the shoot went well IMHO and I hope Sam and you dear readers think the same!

'Til next time, drive safe everybody!