This is the first entry in a series of posts where I'll be talking about some items that are useful or simply just fun to have for a GT-R owner. In this installment, I'll talk about a couple of items that are cool to have if you own an R32 Skyline or any other JDM car.

License plates probably don't sound very exciting but they're very important to keep your car legal and if you have vanity plates they're a great way to add some individuality by getting a BTMAN plate to tell the world you're either Bruce Wayne or you have an unhealthy fascination for people's posteriors. What you may not have considered though on a JDM car is that Japanese plates are slightly bigger than American ones and so the mounting holes don't line up properly when you use US plates on a Japanese-market car.

Japanese plate holes are about an inch wider than US ones so without modification you'll be forced to put on your license plate using only one hole and skewed to one side. Not only is that not very secure but it also just looks weird.

Fortunately, there's an easy fix by using these license plate adapters from Canadian company RightDriveParts. What they are is basically a pair of steel plates with two screw holes that line up with the wider Japanese ones together with two more that match with the narrower US openings. They come with four screws for each plate and you basically use two of them to attach the adapter to the car's plate mounting and then you use the other pair to hold the actual license plate to the adapter. It's a simple but effective solution. The plates cost about 25 bucks plus shipping which is a bit pricey for just some steel plates and screws but it beats having to make your own or losing your plate because it was desperately clinging on with a single screw. 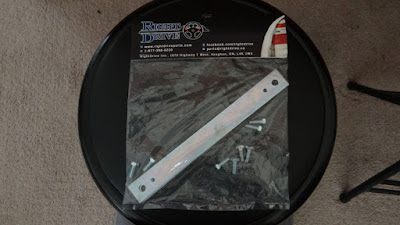 Because I live in Arizona, I only needed one plate and adapter on the back of the car. That also meant I could add some more individuality to the car by putting a plate of my choice on the front bumper attachment. Since the car is a true JDM Skyline I decided to get a replica Japanese plate.

There are several online shops that offer replica plates but they don't always offer customization of the characters and a lot of them aren't the size of an actual Japanese plate, instead they're a US plate size that just has the look of one originating from the land of the rising sun. The shop I got mine from – licenseplates.tv – not only offered customization and a plate the correct size of a real Japanese one but they also offered them in the different official plate colors and you could pick the characters that designated which prefecture your car came from. In my case I of course opted for Kanagawa prefecture, home to Nissan headquarters. If you're an Initial D fan you can opt for Gunma prefecture. Or maybe you're a rebel and want Toyota's prefecture? Oddly, licenseplates.tv has that wrong and lists it as Sapporo (which isn't even a prefecture) instead of the correct Aichi. Weird. To be honest, I'm not sure they have the prefectural characters right for Kanagawa either. Oh well, I'm no expert and most people aren't so meh. For the characters I decided to go with 235 on the top line (that's the race number I use for trackdays) and then 23-GT for the main four symbols. The tradeoff for having the customization options they offer is a higher price – about 95 dollars (I got mine on sale for less though) versus a third of that for other places where the plates are not Japan-sized and the customization is more limited.

Within a week I had my plate and it looked great – very authentic looking. The paint was well done and very clean. All I had to do was make the mounting holes since the plates don't come pre-drilled so that you can customize it to your needs. That's where I ran into the only problem I had with the plate. If you order 3 characters for the top line it turns out the last character will be right where one of the holes has to be drilled. The hole's not big enough of course to cover up the symbol but it simply doesn't look clean. If that bothers you then be forewarned and just order two symbols on the top of the plate. 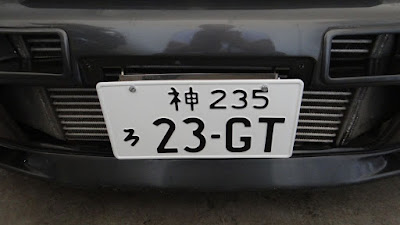 After getting it on though, the plate is a great added touch to my JDM car. If you're not required to run a front plate in your state, it's worth considering getting one of your own.

Come back for future posts on useful stuff for your GT-R including a really effective way to make your 25-year old JDM car smell new again and a simple fix for that pesky kph-only speedo.