DIY-ATNTFIU: Jacking up an R32 Skyline (or any other car for that matter)

This will be the first of what I call DIY-ATNTFIU articles – short for Do It Yourself, And Try Not To F It Up. I'll start off by letting you know that I don't claim to be an amazing mechanic so you won't see me rebuilding an engine with just a swiss army knife and a popsicle stick but I am decently handy with a spanner...or a drill...or a sonic screwdriver - and this is not the first DIY I've ever written. A while ago I wrote a rather well-received forum post on how to install aftermarket seats in an R35 GT-R – a more complicated affair than it might seem since there are a bunch of sensors, warning lights, and whatnot you have to bypass. Voodoo magic and a couple of animal sacrifices were needed for success.


The fact that I'm not an expert mechanic may actually help with these DIYs because I'm not going to just pound you with technical terms that I assume you understand. We're gonna keep it simple and assume you're new to wrenching on a car but have a boundless desire to be closer to your vehicle (in a healthy, platonic way) and learn more about it while hopefully not losing too many skin cells in the process.


We'll start off with something simple but daunting to someone who's never done it before: lifting a car and getting it on jackstands. I know, to many of you this might seem too easy a job to need a guide but we were all noobs once and even if you know how to do it it's nice to know where exactly the jack points on an R32 are. If you've tried reading the Australian service manual to get that info the pictures are so crappy they might as well be in braille.


Anyway, let's talk about the equipment you need:
So, lets begin the actual process. We'll explain jacking up the front first since that's where most work is done including regular oil changes.


First, you want to drive the car up onto the low-profile ramps.

Once on the ramps you'll need to position your jack in the middle of the front of the car. 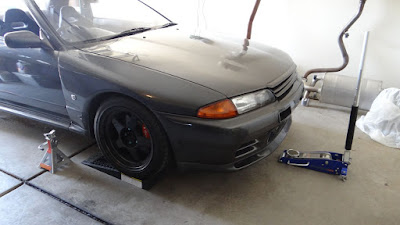 Before I start lifting I usually find the side jack points already and position the stands next to them so that I can quickly get them underneath. On the R32, like most cars, there are six jack points. Two are in the middle for use with hydraulic jacks while four are on each side for use with the emergency jack in the trunk, jackstands, or shop lifts. The ones on the side look like this:

Before you lift the car, look underneath the sides and find these jack points. On the R32 and most cars the jack points are marked by cutouts on the pinch weld (that's the seam that you can feel running down the side of the car on the bottom between the wheels). To lift the front end position the jackstands on the points behind the front wheel and for the back use the ones ahead of the back wheels. Always use jackstands in pairs at either the front or back or both - don't use just one jackstand on one corner or the car is unstable. Also, don't use jackstands on any surfaces they can sink into like soil or hot asphalt. Level concrete is best.


Put your chock or chocks in place. For lifting the front end, put the chock behind the back wheel and for the back end put it ahead of the front wheel. 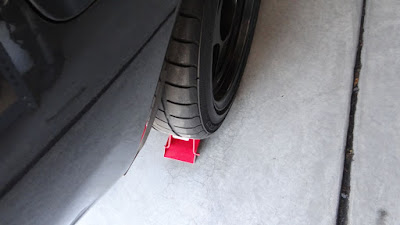 Now you want to slide your jack underneath. There's a crossbeam under the car about where the front axle lines up and Nissan nicely marked the middle of it with an X so that you know that's where your jack pad needs to go.


Slowly lift up your jack's pad until you get close to the X-marked jackpoint. Once you're close, make sure the pad is aligned with the lift point and then jack it up until you make contact and start lifting the car up off the wheels. How much you need to extend your jack will vary and that's one more reason to put the jackstands beside the car already. You don't want the car too low that you can't get the stands underneath but too high and you might drop the car hard on the stand and damage the pinch welds or worse, have the car fall off the stands entirely. I usually extend my jackstands 2 or 3 clicks up in length and lift the car up just enough to clear that height. 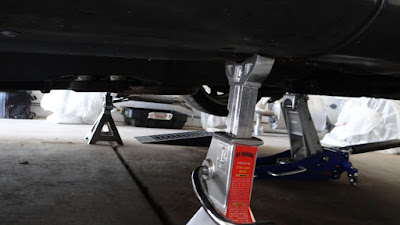 Once you have the stands underneath, gently release the pressure in your jack to lower you car until it rests on the stands. You can then pull out the jack if it will get in the way of what you're doing or leave in place if not – just be careful not to trip over it while moving around. And voila, you've just jacked up your R32!
At this point, it's important to explain why you need jackstands anytime you need to lift a car for anything but a brief moment. You've no doubt seen people work on a car with just a hydraulic jack supporting it but all that's holding up a car at that point is the hydraulic fluid in the jack. If a leak develops, better hope you're not underneath or else you'll be inadvertently testing out the virtues of Obamacare. Play it safe, use jackstands. Also, before you get under the car it pays to give the car a firm push from either side and the rear to make sure it's stable. Better to have the car drop now than find out you did something wrong while you're under it.


Lifting the back end is essentially the same process except that you usually don't need to use ramps to get underneath most cars, the R32 included. Basically you do the same as on the front except now you need to find a U-shaped bar underneath the rear end to place your jack pad underneath.

Note that the rear differential is right there and to old hands that might seem like the expected place to support the rear of the car but that's not what Nissan tells you to do. Remember, this isn't your Uncle Joe's rusted-out old Bronco with the live rear axle and huge pumpkin (that's the rear differential to you city slickers) hanging out ahead of his bright-red pair of TruckNutz.

And so, that concludes this DIY. Next time, we'll talk about...oh, you want to know how to get the car down? You mean you weren't going to leave it up there to show your friends your newly-acquired mechanical acumen and also how awesome a teacher I am?

Pfft. Whatever, you ingrate. Anyway, the process is simple. Just reverse things. Slip the jack back underneath and raise the car up off the stands. Take out the stands. Gently lower the car back down, take out the chocks, and Bob's your uncle. There, happy?

So as I was saying, that concludes this DIY-ATNTFIU. Next DIY, we'll make use of this jacking-up knowhow to complete an essential gearhead rite-of-passage: the oil change.

Important disclaimer: Understand that working on your car can be inherently dangerous. This is meant to be a guide only and does not take the place of common sense and proper safety precautions. Only you can ensure your own safety and that of your vehicle. Know your limits and ask for qualified help if you're unsure of something. Every time you act stupid in the garage...God kills a Miata.