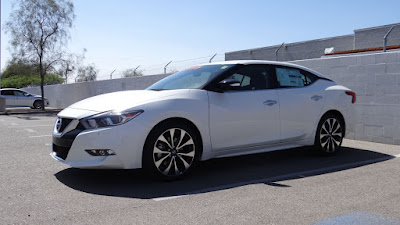 This may be a GT-R focused blog but as you can probably tell if you’ve been reading my posts regularly I’m very interested in other Nissan cars as well as those of other manufacturers. Besides the GT-R, Nissan has many long-lived and storied nameplates and one of those is the Maxima.

Although I’ve never owned one myself I’ve always had a strong interest in Nissan’s range-topping sedan and have driven the previous two generations several times. I thought seriously about purchasing one of the last generation Maximas with the handsome styling and ample power being major pluses but ultimately the combination of a CVT transmission and front-wheel drive were enough to undermine the “sport” aspect of Nissan’s “4 Door Sports Car” in my mind.

With the new Maxima, Nissan is once again emphasizing the “4DSC” heritage in its marketing for this latest generation so I was intrigued about seeing whether this time the Maxima was like Colin Firth’s character in Kingsman – a skilled warrior in gentleman’s clothing – or more like Rowan Atkinson in Johnny English – flashy duds hiding Mr. Bean underneath.

The most immediately obvious change in the Maxima of course is the exterior styling. Both the new Murano released earlier this year and the Maxima have styling based off two very distinctive and eye-grabbing concepts. With the Murano, Nissan did an excellent job of translating the Resonance Concept’s styling to production sheetmetal and much of the automotive media has praised the execution – an opinion that I agree with. The Maxima’s styling was based on the rather unimaginatively named Sport Sedan Concept which was a great-looking design for the most part except for the controversial schnoz. Unfortunately, that aspect carries over to the production car and from certain angles the nose looks a bit too exaggerated. I can almost hear it aping Cyrano de Bergerac and describing its own front end as “Forsooth! It’s a peninsula!”

Thankfully the rest of the car is full of pleasing design cues. Interesting surface treatments abound and the new “floating roof” design element Nissan pioneered with the Murano looks striking on the Maxima as well – at least in the lighter colors where there’s adequate contrast between panels to reinforce the effect. The end result isn't perfect but still very handsome and actually grows on you the more you see it.
Under the controversial nose is a far more conventional choice in the powertrain department. Nissan’s trusty 3.5 liter VQ V6 has been around seemingly since dinosaurs hadn’t been turned into liquid goo to power our cars but it’s a trusty, reliable, and torque-filled powerplant. In this application its output has been boosted to an even 300hp, up 10 from the preceding model, mileage has also improved slightly, and it’s supposedly been treated to an extra dose of refinement. This certainly seems to be the case with the new Maxima and it pulls very healthily from a stop without displaying signs of that four-letter word “torque steer”. Highway speeds were reached and maintained effortlessly and the ride was plush but not wallowy.
The exterior may be a bit polarizing but I think the interior will meet near-universal acclaim. This car and the new Murano easily have the best interiors I’ve ever seen in a Nissan. You’ll want to touch the surfaces to feel the soft leather and prominent stitching, seen most notably on the racy new D-shaped steering wheel. Solid feeling paddle shifters back up the steering wheel in the sporty SR model but other trim levels can only use the shift knob when you feel like rowing your own – or at least simulating that feeling since the tranny is still a CVT. The knob’s both aesthetically and tactilely pleasing with a shape reminiscent of BMW’s shifters. Also enticing you to touch it will be the large new 8-inch center screen that includes standard navigation on all trim levels and is canted slightly for a more driver-centered orientation. Backing up the touchscreen is a well turned-out control wheel on the center console similar to the trend in German luxury cars. There’s also a gorgeous 7-inch display in the middle of the instrument cluster – a great addition I wish my GT-R had.
The front seats are Nissan’s current “Zero-gravity” design and were very comfortable with just the right amount of bolstering to feel sportier than the thrones in other models. Rear-seat legroom is ample and trunk space is generous. On all but the highest level Platinum models the interior is accented by metallic trim with a cool X pattern. The top trim gets wood which I think verges too much on the old-mannish side and isn't executed as well as the trim on the lower levels but seems par for the older demographic the Platinum model skews to. Overall, the interior is superbly done and is the biggest bullet point in the list of Maxima improvements.
But then we get to the elephant in the room – the driveline configuration. Sadly, yes, the Maxima still has to live on with a CVT and front-wheel-drive and stick shifts remain a fond memory of 4DSC’s of yore. In its defense, the CVT has been retuned to feel less rubber-bandy and now does a credible but not perfect impersonation of a conventional torque converter auto. I’m not one of those gearheads who automatically get up in arms over CVTs – or front-wheel drive for that matter – and feel that they have their place. However, that place is in a car tuned for efficiency not in one claiming to be a “four-door sports car”. A DCT transmission and rear or all-wheel drive would go a long way to backing up the 4DSC hyperbole but unfortunately the Maxima remains hobbled by the same issue it's had to deal with for the last couple of generations – it's Nissan's flagship sedan but it can't be TOO good or it'll encroach on sister brand Infiniti's turf. Maybe someday Nissan and Infiniti will be comfortable enough in their individual sales and brand identities that a great Maxima can coexist with Infiniti's offerings but this generation isn't quite it.

Compared to its large car competition the Maxima at least can be seen as the sporty alternative especially in the more athletic SR trim. It's overall an excellent entry into that category and offers a lot to entice the buyer shopping in that stratum. To an enthusiast who has to juggle real-life considerations like value, practicality, passenger space, and comfort the new Maxima is worth looking at. It's not quite the return to form for the “4 Door Sports Car” that Nissan is hyping but some major improvements make it hard to ignore. In short, we're still waiting for the suave superspy to return but what we get is a far cry from Johnny English.

P.S. Don't hold your breath for a Nismo version. As cool as it would be to imagine what that would be like I was told by an engineer on the development team that that was categorically not in the offing and the SR trim level is the closest will likely get to one. Oliver haz a sad.