Progress Bar: R32 Part 4 - Stripping Down and Shaping Up

This Progress Bar won't be as long-winded as previous installments because only two things have changed with my R32 since the last one but they're very major changes.

The first thing that occurred was that a week ago my friend and I finally got a chance to strip out the interior of the car. After about half a day's work we removed the carpet, seats, center console, rear seat cards, A and C pillar trim pieces, and all the dash except for the main upper portion and the instrument cluster. If you're curious what an R32 GT-R looks like minus all of that then have a gander at these pics:


We found some interesting things in the process of removing the interior - one of which was the inevitable loose change. At first I was disappointed to find a measly US penny in one of the driver's side seat stays. It wasn't the amount but the fact it was an American coin that was a bummer since I was hoping to find remnants of its former life in Japan. Luckily my friend found a 10 yen then a 100 yen coin on the passenger side. Score!
On the passenger side floorpan we also found another very curious item: 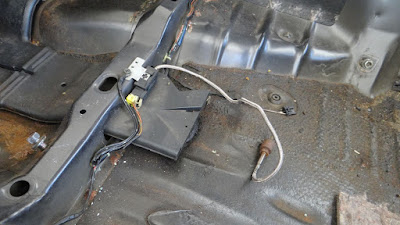 We ended up with a big pile of parts in the garage: 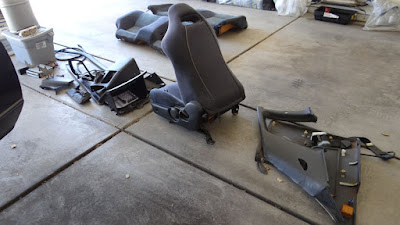 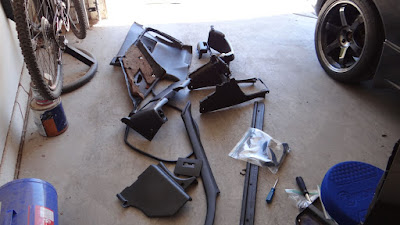 After vacuuming up some gravel that had been left underneath the carpet (JDM gravel – a little bit of Japan. Sweet!) we bolted the driver's seat back in and ziptied the AC module to the center console stays so that the car could still be driven for the next step. (By the way, it is a thoroughly unique experience to drive a Nissan Skyline that's minus it's interior – it's very race car-ey!) 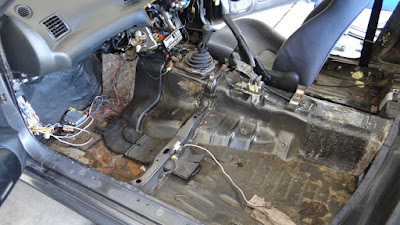 That next step was dropping it off at a local body shop for a full exterior respray. I've mentioned before that the car had paint that was fading in places and scratched up in others so once the car gets back that will all be a memory. At the same time the shop will be replacing the old front bumper cover with a brand new one to replace the original that a previous owner hacked up. New moldings and weatherstripping will also go on to replace the tired originals. Before you ask, the car will remain in its original KH2 Gun Grey Metallic shade since that's how Nismo R32s came from the factory and I want to preserve that heritage. 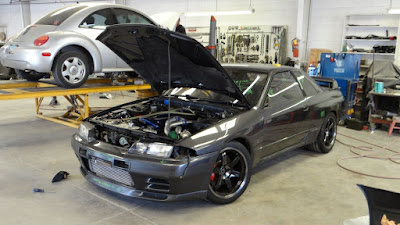 Because of the repaint I'll be Skyline-less for several weeks while the body shop does its magic. The wait will be agony but at least I can take comfort in knowing my precious Nismo will be looking much more fit on its return (and I still have my R35 to play with in the meantime *big grin*). Unfortunately my clutch replacement had to be postponed until after the paint job since my other friend's shop was backed up with work. Since the paint shop only does full-on restoration jobs in the lull of the scorching Arizona summer I didn't want to miss my window. The new clutch and many other nice things therefore will be stuff to look forward to when my car gets done getting all shinied up again – at that time, expect the next Progress Bar installment!