As you've probably guessed from my ownership of two GT-Rs and the very existence of this blog, I'm an absolute fanatic for Nissan in general and GT-Rs specifically. It won't surprise you then that I have a small collection of GT-R items ranging from cheap Hot Wheels models to race team memorabilia to rare Nissan items that were never sold to the general public (Snagged through sheer dumb luck and my world-renowned skill at grovelling).

It probably won't surprise you either from all the info I try to put in my posts that I love to read, so I have a large assortment of Nissan and GT-R related books and magazines. Since you're most likely a fellow Nissan and GT-R enthusiast if you're reading this blog I figured I'd talk about some of my items in case any of you are collectors as well - and I'll start of with a couple of great books.

First off we have Nissan GT-R: Legendary Performance, Engineering Marvel by Alex Gorodji. This is one of the few coffee table books out there on GT-Rs and only one of two English ones so far that are up-to-date enough to include the R35. The author unfortunately passed away earlier this year but before his death he was a passionate GT-R fan, even going so far as to start a company specializing in left-hand drive Skyline conversions back when Motorex was still importing Skylines into the US. Sadly, there wasn't much of a market for LHD conversions and with the demise of Motorex the company simply failed. 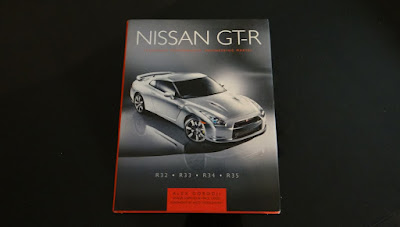 Gorodji's passion for the GT-R remains evident in his book after his passing however. The book presents itself well on first blush with a simple but appealing cover showing a silver R35. The illustrations inside the book are just as pleasing to the eye with numerous lovely photos – a particular favorite of mine is the one that greets you on the first chapter intro page where a beautiful picture of a Japanese mountain road illustrates the origin of the Skyline name. 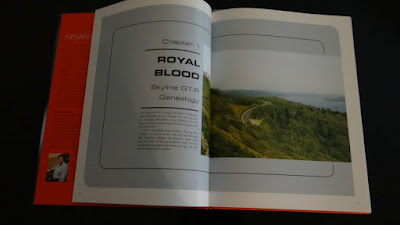 There's plenty of meat in the writing as well with many interesting factoids about the long GT-R history as well as numerous explanations about the engineering details of these highly-technical cars. From the workings of ATTESSA to the minutiae of suspension design, if you love reading about automotive engineering you'll be in nirvana. One problem however with this book is that the information in it has a bit of a bell-shaped curve to it. It discusses the GT-R chronologically from its origins as the Prince Skyline through the R32, R33, and R34 generations, and on to the current R35, but it basically skims over the early Skylines including the very first GT-Rs – the Hakosuka and Kenmeri. The discussion becomes meatier as you get to the R32 and the page count keeps increasing with the subsequent two generations. Once it gets to the R35 however the amount of info seems to drop again and mostly just consists of details and press photos released by Nissan at the time. That last part is understandable since the book was published in 2008 when the R35 had just started being sold in Japan but it's disappointing to see a book about the Nissan GT-R give such short shrift to the very first two cars to bear the hallowed nameplate. 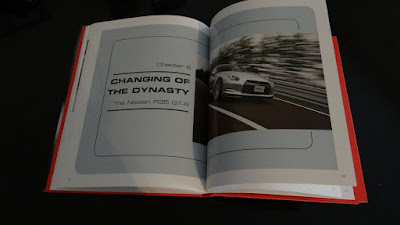 If you ignore that issue however the book is a great read for any enthusiast of the GT-R marque. It's out of print sadly but used copies can still be had online from secondary sellers on Amazon or Barnes and Noble,  although they've marked up the price – sometimes to absurd levels. Alex Gorodji's son would later on write a second coffee table book about the GT-R with the help of his dad but I'll talk about that one another time. Instead, let me tell you about a much more obscure book covering a far more focused area of GT-R history.

Unless you live in a land down under and answer to “bruce” or “sheila”, you've probably never heard of the book Aussie Godzilla: The R32 GT-R Arrives Down Under by Damian Kringas. Heck, even if you greet the morning with a “G'day mate!” and carry around a real knife you might not have heard of it either. Its lack of fame shouldn't be seen as an indicator of its worth as reading material however.

As you can probably guess from the title, the book focuses almost entirely on the R32 Skyline GT-R but it does make some passing mention of it's older and younger siblings. The heart of the book is the saga of how the R32 made its mark in Australia – first as an all-conquering touring car racer then later on as a rare (and locally expensive) rival to contemporary exotic cars. If you've read my guide to rareR32 Skylines you'll already know that Oz was the only market outside of Japan that Nissan officially sold that generation. Since Nissan had no original plans for foreign sales of the san-ni – as that generation is referred to in its homeland - the effort to convince the main company headquarters to sell the car in Australia then subsequently have to engineer it to meet local requirements is a saga all on its own.

Making the book even more interesting is the insight it gives into the twists and turns that went into Nissan's racing efforts in the Australian Touring Car Championship. The bewildering extent to which the governing body tried to neuter the seemingly unbeatable Skylines is fascinating. The efforts ultimately failed and forced the ATCC to outlaw the R32s outright just to stop their dominance, strengthening the mythic view of the GT-R that still exists to this day.

It's good that the underlying story is fascinating because the book itself could have been better organized. The black and white pictures are often haphazardly placed, sometimes with little context as to why they show up. Some portions of text turn out to be quotations from other sources but aren't always clear about it. Most frustrating is when the author talks about a subject and then seemingly leaves it hanging to be taken up only many pages afterward. The seemingly schizophrenic writing reaches its peak – or nadir if you prefer – when he starts off the chapter on the R32's exploits at the Bathurst 1000 race with an angry quote from famous Aussie touring car racer Jim Richards. The quote itself and the caption gives little explanation as to how in heaven's name it's relevant to the topic and it's a full 25 pages before we're given the proper context to understand why it was used.

Thankfully the writing is mostly better than that and the underlying story as I said is engrossing. If you're a student of GT-R lore it's well worth flipping through and if you'd like to own a copy it's amazingly easy to get one even if you live here in our oppositely placed country of Americaland. Through the magic of modern day whiz-bang you can now score a copy of this fairly obscure book through the print-on-demand website Lulu.com for the reasonable price of $17.95 plus shipping.

And there you have it, two great books to enjoy if you're a GT-R fan. As I get a chance I'll sift through my piles of printed matter and assuming I don't suffocate in an ill-timed avalanche of paper you can look forward to more descriptions of interesting books and magazines plus some other GT-R memorabilia in the future.