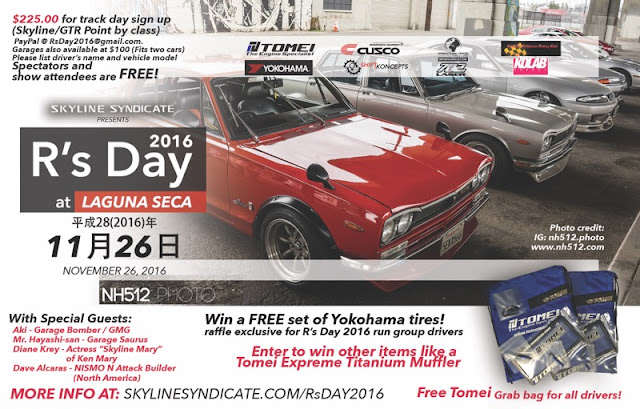 In world history there have only been a tiny number of dates so etched into posterity that they're known by just a single letter. We all know about D-Day when thousands of valiant men fought for freedom on the shores of France and Tom Hanks went off on the first of many attempts by Hollywood to rescue Matt Damon. If you're a weirdo like me you might know about X-Day, the great religious holiday of the wacky parody cult Church of The SubGenius (and you may be a devotee of the Flying Spaghetti Monster if you know that piece of trivia).


If all goes to plan there may come a time when a certain day in November will be viewed as being significant enough to join that very select group of famous single-letter days: I'm happy to share the announcement of R's Day! 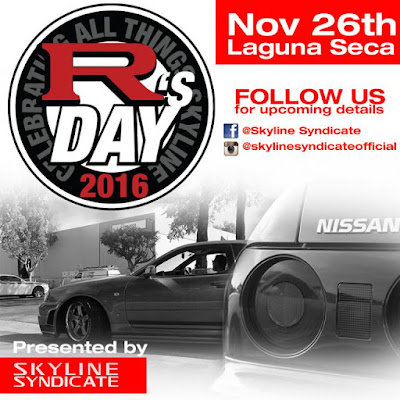 What's R's Day you ask? Simply put it will be a day to celebrate all things Skyline and GT-R. A small group of devoted enthusiasts called the Skyline Syndicate (which I was invited to join but can't take any credit for this great idea) is putting it together and it'll be held on November 26 at that most holy of race tracks: Laguna Seca!


I don't know about you but as a trackday enthusiast Laguna Seca is on my bucket list. Planning is still in the early stages but of course there'll be a car show and since it is Laguna Seca there'll also be track sessions. Hopefully we can turn this into a US version of the famed R's Meeting in Japan!


Of course, barring the Zombie Apocalypse or Canada deciding to invade because Donald Trump got elected, I'll be there with at least one of my R's so I hope you can make it too. I'll post more details as they become available so start saving your shekels and checking Google Maps for the twistiest route to Monterey because this will be 57 flavors of awesomesauce with added bacon!


UPDATE 6/2/16: Here's additional info for those interested in joining the track session at Laguna Seca. It's only one of the most famous racetracks on the planet and such a crowd favorite that it's simulated in practically every racing game that's worth a damn. I know I've logged hundreds of virtual laps on that storied patch of Northern California so I can't wait to do it for reals. Sign up early if you don't want to miss out!
Special hotel group rate is pending. The car show itself will be free to attend. More details as they come! 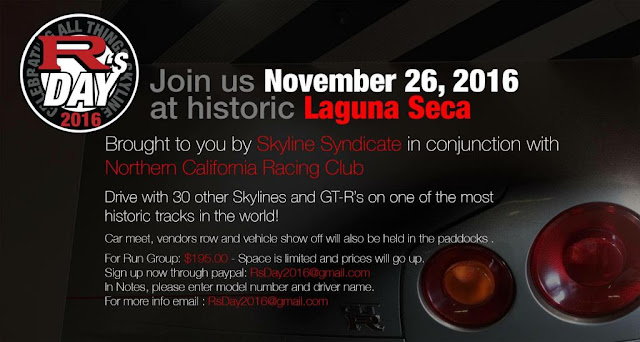 UPDATE 11/20/16: R's Day is just around the corner everyone! Check out the image below and at the top of the page for more details including special guests. There'll be raffles and as I mentioned before it's free to spectate. I'm signed up for the track day and reserved one of the on-site garages so if you're attending feel free to drop by and say hi! Just look for my black R35 and the lost-looking dude that'll no doubt be in close proximity. 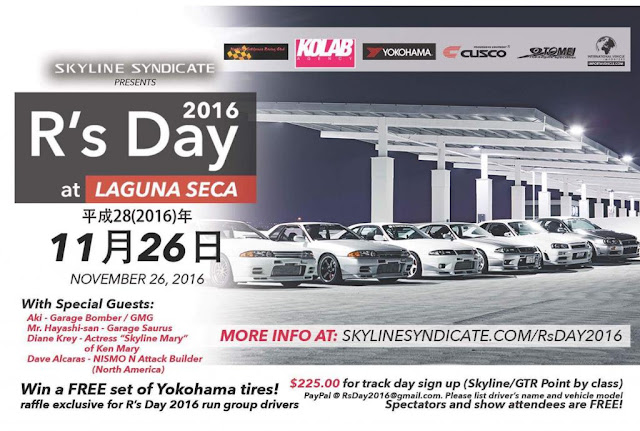 UPDATE 11/21/16: Just a quick addition - if any readers want to say hello I'll be parking my car inside garage #8 during the event. See you there!