The finale for this season's Super GT championship was unusual in that instead of one final race the weekend would see a double-header to make up for the canceled third round at Autopolis due to the Kumamoto earthquake earlier this year. Instead of one big race to decide the championship this year Twin Ring Motegi would instead play host to one 250 kilometer race on Friday as round three and another 250K race on Saturday for the actual final race.

Going into the weekend the #1 Motul Autech GT-R piloted by Tsugio Matsuda and Ronnie Quintarelli looked set to do something that had never occurred before in the history of Super GT – win three consecutive driver's titles. With an 11 point lead they looked like a sure bet but with the unusual double-race format offering up a maximum total of 42 points there were still a lot of cars in with a chance to break the Nismo team's hotstreak. 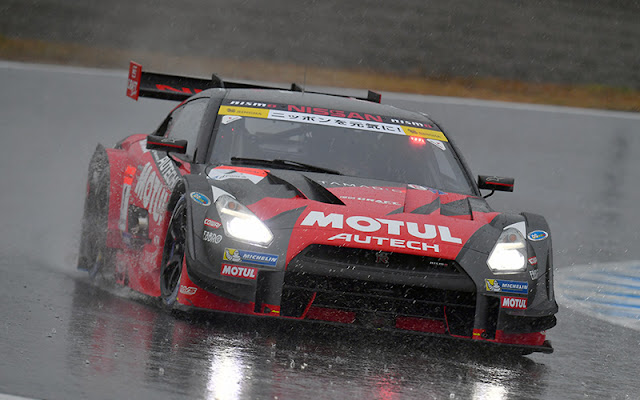 With only a 31 point spread from the first ranked car to the tenth, and a mere three points between first and second, GT300 was even more unpredictable. The #25 VivaC 86 was in the lead thanks to its win at the last round in Thailand but the #3 B-Max NDDP GT-R was a close second.

Instead of holding qualifying the day before, this time the sessions would be held in the mornings before the two afternoon races. Unfortunately for the Nissan runners the first qualifying session didn't go well with the defending champions mired in an uncharacteristic twelfth position out of the fifteen GT500 cars. The other GT-Rs were also in fairly unspectacular positions except for the #24 Forum Engineering car that had somehow found the speed the other R35s lacked to put itself into second. The rest of the top spots were taken by Lexus cars, with the #39 Denso Sard car of Heikki Kovalainen and Kohei Hirate earning the pole. 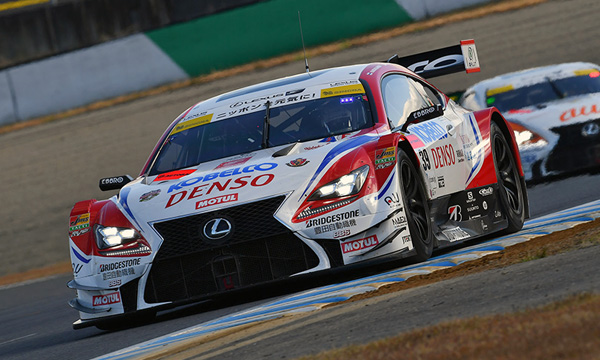 The news wasn't much better in GT300 for Nissan with the #3 B-Max car landing in a horrible 21st starting position while the VivaC 86 it was chasing was way up in 7th. Pole went to the #11 Gainer Tainax AMG GT.

The start of the race saw the Denso RC F maintain its speed advantage from qualifying and it leapt to an early lead. The same was true for the Gainer AMG in GT300. Things got bunched up again quickly however when amazingly two different crashes occurred almost simultaneously under both of the two bridges on the course. Both the #5 86 and the #55 ARTA BMW M6 crashed with the latter obliterating its entire front end. This brought out the safety car to allow for the lengthy cleanup.

Once racing got underway the #39 RC F bolted again and it was starting to look like this would be a rout by the pole winner. Meanwhile the #1 Nissan was barely making any headway in the back of the field. The pit sequence really changed the complexion of the race however as the #24 GT-R decided to gamble by not swapping tires and taking a late pit stop on lap 31 of the 53-lap race. This allowed it to rejoin in front of the #36 au Tom's RC-F that had also leapfrogged the previously leading #39 Lexus during the pit sequence. Meanwhile in GT300 the #21 Hitotsuyama Audi R8 had also managed to gain the lead over the Gainer car thanks to a good pit stop.

The #39 still had its speed though and it overtook the au car eight laps later. Kohei Hirate then set off to hunt down Masataka Yanagida in the leading Nissan. As the laps wound down it was clear the Lexus had the speed advantage as it was soon right on the tail of the #24 car. GT300 was also seeing a battle for the lead as the #33 Excellence Porsche was making a late race run on the leading Audi.

Both Yanagida in the Forum Engineering GT-R and Richard Lyons in the Audi pulled off great defensive drives however and took the wins in the two classes. Yanagida worked especially hard with the gap at the end being a mere 0.2 of a second. This was the #24 car's second win of the season and was some comfort to the Nissan camp which had seen the #1 car finish a dismal 9th and salvaging only two points from the race. Meanwhile the #39 car had leapt into the lead of the championship by three points thanks to its second place finish. 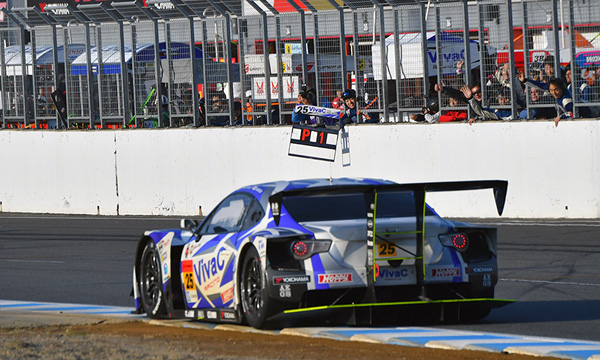 The Vivac 86 did a better job of defending its lead by finishing 7th while its main championship rival finished with no points. The #3 GT-R lost ground on the leader and ended up still in second but now with a nine-point gap to surmount.

Day two of the double-header offered a chance for the Nissan crews to make up for the poor performance of all but the #24 car on Friday. Sadly, qualifying wasn't too much better with the #1 car bettering its previous day's position by getting 9th but the leading #39 Lexus again cruised to the pole. The Forum Engineering GT-R couldn't repeat its previous pace and ended up in a much poorer 12th grid slot.

The story for the #1 Nissan was echoed by the #3 GT-R. Although it improved its qualifying position by getting 14th instead of 21st this time, the championship leading VivaC car stayed way ahead in sixth.

The race didn't have any fortuitous twists for Nissan either. The #39 Denso Sard car cruised to the win from its pole position start. The defending champions tried their hardest and even took the same gamble the #24 car took the previous day of not changing tires but it was all for naught as they could only manage 7th. This gave the Denso Sard team their first championship since joining Super GT in the earliest days of the series when it was still known as the Japan GT Championship.

It wasn't as easy for the eventual GT300 title winners as they needed a shrewd strategic decision to take the race win. The VivaC 86 started in sixth while the #31 apr Prius was on pole and pulled away early. The #25 car decided to gamble with an early pit stop and this ended up putting it in good track position right behind the Prius towards the end of the race. The VivaC car eventually overhauled the Prius to take the win and the season title. Congratulations to both the title-winning teams on their great efforts! 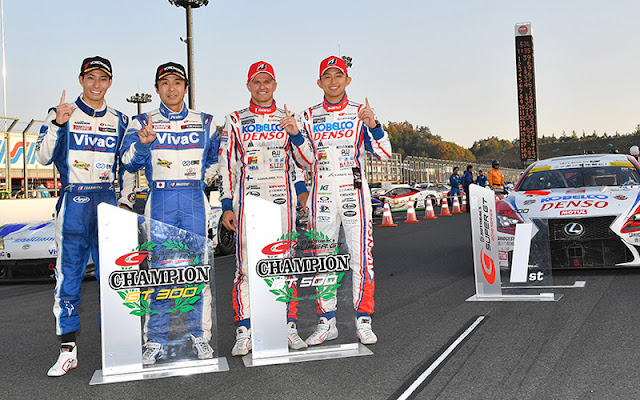 And so, 2016 ends on a low for the Nissan camp that looked so sure to take another title in GT500. With amazing back-to-back wins at the start of the season it really looked like the #1 Motul Autech car had the legs on everyone. The titles going to a different manufacturer shows the quality of the racing in Super GT however and Nissan can still take pride in the fact that their cars won more races than any other manufacturer this year just as in the previous two seasons that saw them win titles. Losing out on this year's championships will surely make Nissan more determined than ever to regain them and with new cars coming next year it's certain to be another great season of racing in 2017.

Once again Nismo.TV livestreamed the races with the help of RadioLeMans and here are the links to both of them: