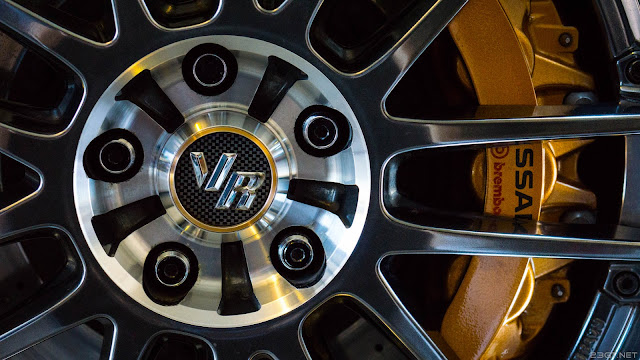 The R35 GT-R is an extremely fast car, especially if it's been extensively modified. Of course, any car that can easily hit triple digits in the time it takes to read this sentence needs to be able to come to a stop just as quickly 'cause running into things is bad, you know? Thankfully Nissan equipped the R35 with an extremely beefy brake setup.

No matter how good the brake system however it'll need periodic maintenance to make sure it keeps performing at its best. For my R35 the time had finally come for me to replace the OEM brake pads and rotors it had come with.

It wasn't because the pads or the rotors were worn out as you might assume. Instead it was because I had experienced the huge flaw with the OEM brake setup – cracking of the rotors. The R35 is a fairly heavy car and it puts a lot of stress on its brake rotors. After enough heat cycles on track – or even heavy street use - the stock rotors start to develop cracks in the spots where they were cross-drilled. It's a common phenomenon but certainly not something you want to ignore if you push your car often. Let the cracks get too bad and you better like living life on the edge because a rotor that spontaneously converts itself into dozens of chunks of scrap metal does a piss poor job of stopping a car. Before I took my GT-R out on track again the old rotors had to go.

There are lots of good brake replacement solutions out there for the R35 ranging from simple replacement rotors and pads that reuse the stock rotor hats to full big brake kits with carbon ceramic rotors, billet monoblock calipers, and BIG, SHOUTY LOGOS that will lighten your car – and your pocketbook – by huge amounts.

Speaking of lightening your pocketbook, one good way of doing it without much gain is having a Nissan dealer do your brake job with OEM parts. Nothing against Nissan dealers – my local one's awesome btw – but some of the unscrupulous ones will take you to the cleaners on parts pricing with some unsuspecting people being charged 7-8 grand for an R35 brake job. Those kinds of dealers make brothels look like beacons of purity. Don't get taken for a ride by going aftermarket for your brakes if you have an R35...and you'll have money left over for the brothel.

I wanted a kit that was better than a basic replacement setup but one that wouldn't break the bank. Eventually I settled on a setup from RacingBrake that would not only prevent me from having issues with cracking rotors again but it would also give better braking AND reduce unsprung weight on all four corners.

One of the upgrades from the 2009-2011 CBA cars to the later model year GT-Rs was an increase in the brake rotor diameter from 380mm to 390mm. The kit I got included larger rotors that matched the size of the later cars but also included spacers to relocate the CBA calipers appropriately to fit them. The larger rotors should help braking performance by increasing the swept area of the pads but also should provide slightly more mass to accommodate heat. Besides, bigger's always better right? Except with tsunamis...and utility bills...and kidney stones...and stab wounds...

Another cool thing about the RacingBrake kit was that it came with new forged aluminum hats instead of having to reuse the stock steel ones. This upped the price by quite a bit but in exchange it promised to cut unsprung weight in all four corners. According to the stats published online the front brakes should lose about two pounds in weight while the rears a substantial five pounds. That may not sound like much but as anyone well-versed in performance mods will readily tell you, losing unsprung weight is far more valuable than reducing weight in any other place on a car since it helps you accelerate faster, stop more quickly, helps improve suspension performance, and returns that youthful luster to your skin (I may be lying about that last one). Another advantage to the RacingBrake hats is their more open design that improves brake cooling. And despite being aluminum they have an iron insert to allow compatibility with the OEM parking brake so your car never rolls away and ends up on Youtube.

The new rotors, hats, and brake pads plus Motul brake fluid and new stainless steel lines set me back just under 3200 dollars. Just replacing the rotors and reusing the OEM hats will save you a lot and if you're not planning on taking your car to the track a good kit should cost you only about 1800 bucks. My preference when replacing parts is to try and find something that offers an appreciable advantage over the original parts though so I made the decision to pay the extra for the lighter weight and higher performing kit.

Installation of a brake kit like this isn't cheap of course and will typically cost you $400-700 on labor. You could of course do it yourself but brakes are so critical that you should only attempt this if you're sure of what you're doing. I've done brake work before on my other cars but the R35 is on a whole other level performance-wise so I opted to let a pro do it for me. I haven't had a chance to test out the new kit on the track but come back after Thanksgiving 'cause I'm planning on giving these bad boys a proper baptism at Laguna Seca for R's Day!

The observant among you may have also noticed another change in the pictures – I swapped lug nuts. That may seem like a weird thing to change but the Volk Formula lug nuts I used to have had a very annoying flaw. Unlike conventional lug nuts that have a hexagonal shape or splined surface the Formula nuts have a smooth outer surface and are turned using a heptagonal key that slots inside the nut. To cover the heptagonal slot each nut has an aluminum cover that screws into the end. Being aluminum however they're easy to strip if some monkey – like at your local tire place – doesn't take care in re-installing them into the steel lug nuts. That's exactly what happened with a couple of mine and one was bad enough that an EZ Out had to be used since the allen slot had rounded off. Imagine if that happened and you had to change a tire or wheel while a long way from the nearest shop. I'm sure you'd want to shove those offending lug nuts up certain orifices of the tire guy who ruined them especially seeing how pricey the Formula lug nuts are.

To avoid future issues I decided to go more conventional and switch to a set of simple Rays steel lug nuts. Why go with steel again you might ask when aluminum nuts are available and weigh less? Didn't I drone on about unsprung weight being so important? Well, there's a simple reason for using steel: Nissan specifies torquing lug nuts on the GT-R to 97 foot pounds and aluminum nuts are typically rated to only about 80. Steel nuts can handle the high torgue spec of the R35 and avoid any highly embarrassing moments when your wheel decides it wants to go back to the pits before you and the rest of the car decide to do so. Hopefully that never happens to you. Drive safe!