So as I mentioned in my last post I just got back recently from another trip to my old home country of the Philippines. It just so happened that this time my visit coincided with the biggest car show in the nation, the Manila International Auto Show or MIAS for short. Of course as a diehard petrolhead I wasn't about to miss this chance so on a Saturday morning I braved the crowds hoping to see the best of Philippine motoring.

Since the Philippines is a much smaller country than the US that's located on a bunch of islands separated from the rest of Asia by the South China Sea you might think that there wouldn't be anything like the vehicular variety we enjoy here in the US of A. However, as I've mentioned in my previous article on Philippine car culture, the country has a long-standing love affair with the automobile and with the economy maintaining slow but steady growth there's an amazing amalgam of cars and trucks to choose from. What's even more interesting for the Western gearhead are all the vehicles that aren't sold in North America.

Because of the less-developed roads and frequent flooding in the Philippines the body-on-frame SUV is still a huge seller over there, unlike here in the US where other than a few full-size models and a handful of smaller off-roaders the class has been driven almost to extinction by crossovers. The mid-size market is particularly hotly-contested with top-selling Japanese models like the Mitsubishi Montero Sport and Toyota Fortuner playing a game of regular one-upmanship with new offerings from the Americans like the Ford Everest and Chevy Trailblazer.

You'll also see a lot of cab-forward vans there because of the need for economical transportation for the maximum amount of people in the smallest amount of space. Snub-nosed vans like the brand-new Nissan NV250 Urvan and the market-leading Toyota HiAce have long gone the way of the dodo in the US as vans have become increasingly viewed as rides meant only for couriers, plumbers, and the occasional weirdo who spray paints “Free Candy” on the sides.

It's a shame really that such vehicles are nowhere to be seen in the US because a turbo-diesel SUV is a great go-anywhere vehicle that'll take you on adventures your barmates will never believe and possibly even save your bacon when the Zombie Apocalypse hits (I keep my trusty R51 Pathfinder around just for such undead exigencies). The cab-forward vans are great for road trips with all of your friends and their friends and there's just something oddly cool about driving a vehicle that can hold more bodies than a clown car and where you can see everything in front of you because well, everything is LITERALLY in front of you when your ride has no real nose to speak of.

On the smaller end of the scale you have the tiny econo-cars like the Kia Picanto and Honda Brio that we'll probably never see in the US unless oil becomes a four-letter word. With motors displacing less than a decent bottle of soda and a footprint smaller than Shaquille O'Neal's left shoe it's easy to make fun of them (especially when you think an inattentive American semi would probably grind them into the tarmac with ease) but having owned a Honda Fit before myself as a daily driving counterpart to my R35 GT-R I can readily vouch for the fun of driving a small car. Ragging a tiny car to within an inch of its life at sublight velocities on city streets can be every bit as fun as toeing the knife edge on track with a supercar. And it's much more economical too. If you have doubts about the fun of tiny cars, ask my Indian friend who joined me on a short tire-squealing trip in a rental Dodge Neon years ago. Actually, on second thought don't ask him 'cause I believe he swore never to ride with me again after that. Go figure.

Another thing you'll see a lot of in the Philippines but not here in the States are all the Chinese brands plus a few other Asian companies we no longer have or never got. Geely, Chery, and Great Wall are all targeting the Filipino buyer along with Ssangyong from Korea, and Tata and Mahindra from India. Suzuki and Isuzu have pulled out of the US for some time now but they're still alive and well in Asia. Oh yes, and the French want in on the action too with Peugeot hocking their wares prominently at MIAS.

There are also the AUV's or Asian Utility Vehicles. They're kind of hard to describe in brief but basically think of them as SUVs-on-the-cheap. They're more prolific than cockroaches in Asia but interestingly none were on display at the show (probably 'cause they sell like bacon-wrapped hotcakes anyway) so I won't talk about them too much here.

One thing that was very much on display at the show was the Filipino fascination with car show models. The Philippines doesn't have many hang-ups about “being sexist” or “objectification of women” so models are everywhere at a typical Filipino car show and some of them enjoy a degree of celebrity. Female readers may think this is an indication of backward Filipino values towards women but honestly the Philippines has a healthy attitude that I think countries like the US could stand to learn from. Despite the penchant of the Filipino male to act the part of the macho gentleman women are treated well and the average Filipina is quite liberated and very comfortable in her stature and role as a female. Hillary may still be trying her darndest to become President in the US but in the Philippines they've already elected two women to that station, speaking volumes about the standing the fairer sex enjoys over there.

The Philippines being a country that often places well in major international beauty pageants, including having the reigning Miss Universe Pia Wurtzbach, it's no shock that there were a lot of lovely ladies to catch the eye at MIAS 2016. You'll see many of them in the photos below but special mention goes to Rose Turner at Ford and Leslie at Peugeot who graciously put up with your author's harassment and proved they were more than just pretty faces. It may sadden you to know that Rose used to live here in the US until her family moved from Connecticut to the islands but even sadder for us import fans is that she's into muscle cars. She told me she was half-American but her Instagram elaborates by saying she's half American, half bulldog, and a foodie as well. Yeah, America lost out there when she left. Leslie on the other hand was also very charming and did a great job encouraging people to visit Peugeot's mini-museum where attendees were gently reminded that Peugeot isn't pronounced the same way as the Filipino word for “decapitated”. Good thing to know that.

Oh yes, I have to mention that unfortunately Nissan Philippines apparently opted out of MIAS and so sadly there was no display there to show off the expanding lineup they have that's seen their sales grow 60% in the last two years. Toyota and Honda opted out too (as well as Mazda for that matter) but for completeness' sake I took time out from my grueling schedule of mall-hopping and beach-combing to visit their local dealerships and share some photos with you, my dear readers. The sacrifices I make for you guys, I tell ya.

And now for part 1 of the photos. Originally this was going to be a single post but I found I had too many photos (and far too much weirdness) for just one serving :) 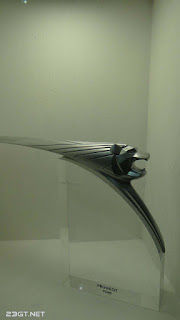 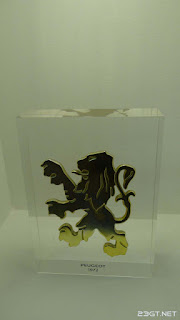 And with that I'll conclude part 1. I hope it amused you enough to come back for part 2 - I promise even more cars, craziness, and cool beauties in that installment!