The Show or Display Import Law for Dummies Part 4.1: Putting the Order in Border

Once you have a Show or Display-eligible R34 and a letter of approval for import from the NHTSA your next big challenge comes with actually getting the car into the country legally. The basic process is similar to importing a 25-year old car so if you're not familiar with how that goes I recommend reading my earlier guide if you haven't already.

Normally your car will be entering its (hopefully) new home country one of two ways – via a land border crossing or through a port on either coast. Conceivably you could import a car by air but if you're doing it that way and having it air-freighted in a nice custom transport box by white-gloved attendants then you're obviously way more baller than I'll ever be and you wouldn't be reading some small-timey blog like this on how to import your new acquisition – you'd be letting your well-trained minions handle it for you.

Whether it's by land or by sea your car will have to be processed by a CBP Port of Entry to get the proper documents sorted and the appropriate fees paid. Usually all that will be handled by a customs broker on your behalf, especially if the car arrives by ship since they usually don't let regular Joes like us onto the docks to collect our cars and annoy the stevedores with stories of how Spongebob Squarepants is our spirit animal. At a land border crossing though you could conceivably handle the paperwork yourself if you know what you're doing, and in fact that's what I had planned to do to save on the extra expense of hiring a broker - but having the Canadian border close due to a killer virus kind of made that hard to do.

Before we talk about the actual entry process and the fees, we need to go over the papers that you'll be needing.

First off, you'll need a copy of your NHTSA approval letter. Naturally, 'cause otherwise the CBP officer will take one look at the car, recognize it's an R34 Skyline, and immediately unleash the banhammer on it. Trust me, that happened with my car until the transport driver showed the officer my letter and managed to convince him that his hammer wouldn't be needed.

Second, you'll need a properly filled out DOT Form HS-7. This is a Department of Transportation form where you basically state under what conditions you're importing a car. Checkbox number 1 is the one you'd use for a 25-year old car like an R32. There are various other checkboxes for use by companies looking to import vehicles for research, professional importers who modify cars to meet DOT standards, and one for use by fat, balding foreigners who like to peddle drugs while saying “Di-ple-me-tic Immuniteh!” a lot. The box we're interested in for our purposes though is number 10 where it specifically says you're importing solely for the purpose of show or display. Note that it specifies that an NHTSA permission letter must be included as an attachment to the form. 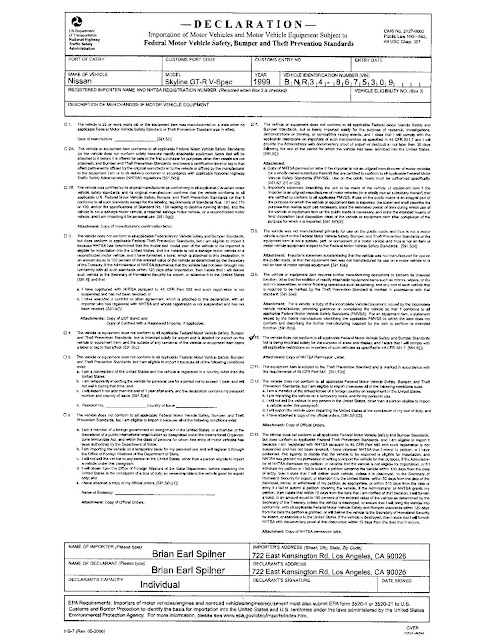 You fill out the form by filling up the spaces for Make of Vehicle, Model, Year, and VIN on top, put a big fat check mark in box 10, then put your name and address as the importer of the vehicle at the bottom. Unless an import company or some other third party is doing this whole rigmarole for you you would also put down your name and signature as the declarant just like in my example above since you're the one filling out the form and legally making the declaration that you really, honestly, swear-upon-your-grandmammy's grave are importing this as a “show or display” car and not a “show and use for illegal street races” car. The other parts you would leave blank for possible CBP use.

The next form you'll need is EPA Form 3520-1. As I've explained before, the Show or Display approval letter means the DOT has given you their blessing to import your new sled but the Environmental Protection Agency doesn't give two f*cks and a snap what the DOT sez because they have their own rules. If you're bringing in some weird furrin car then you either have to get it modified by a Registered Importer and document that it meets EPA emissions standards, or you can wait until the car is at least 21 years old and save yourself a lot of time, money, and accelerated hair loss. For our purposes I'm assuming you're going with the second choice so you'll want to mark off “code E” on the form stating the car has reached drinking age. You'd use the same code of course if you're importing a 25 year old car. 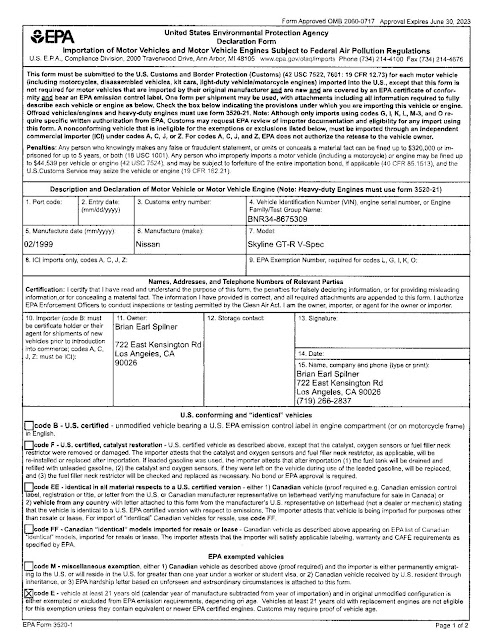 Unlike Form HS-7 the EPA form is double-sided with a lot more checkboxes on the back. None of those apply to a Show or Display car but do print out both sides and have them ready because if you're at all familiar with dealing with government red tape you'll know that they can be real sticklers when it comes to missing pages.

There are a couple of important things to keep in mind here. First, you'll want to have some form of proof that the car is the age you're stating. In my case that was easy because I had a letter from the manufacturer giving the build date of my car but since Nissan stopped giving out those letters back in 2015 your best bet is a printout of your car's info from Nissan FAST. FAST is an electronic parts catalog that lets you search by VIN or serial number. If you put in your car's VIN it'll show information like build date, exterior color, options, favorite food, astrological sign, etc. If you're not familiar with FAST already then go to this page on GTR-Registry.com for help:

Since owners importing 25 year old R32s and R33s have needed proof of their manufacturing date during their importation many have used FAST data for that proof so CBP should be used to seeing it by now.

Second thing to keep in mind is the fine print that accompanies “code E”. Note that it says the car should be in “original unmodified configuration”. Since there isn't an EPA employee stationed at every port of entry in the country the decision on whether your car meets this requirement falls on the CBP officer handling the import. In the strictest sense this means the car would have to be stock with the original engine and emissions equipment in place. We all know how rare it is to find an unmolested Skyline so thankfully in practice most CBP officers aren't too anal about this and are fine with cars that don't look too modified. Pod filters and a fart can will generally fly but if your car rolls up with a V8 motor and exhaust pipes sticking up out of the hood and spitting flames don't be surprised if you get some major stink eye from the nice officer. In that case he probably won't be saying “Welcome to America!” after he's done shuffling all the paperwork. I don't recommend you try to impress him by going “Because racecar, bro!” either. So, here's a top tip: Get a car that's more mild than wild.

You should print out both form HS-7 and 3520-1 on letter-size paper (not legal-size paper. I've only ever seen completed forms on letter-size and that's what CBP expects. They probably won't accept them if you have them in the wrong size). If you're crossing the car over yourself through a land port of entry then call ahead to try and get details on how they want you to have the forms ready – most of the time they'll want you to fill out the relevant parts already like in the examples I've shown but sometimes they prefer you fill out the forms there. To be on the safe side bring both filled out and some blank copies of the forms.

In addition to the letter of approval, HS-7, and 3520-1, you'll also need the bill of sale for the vehicle to show you didn't just jack the thing and to show the sale price for the duty calculation, plus the previous registration. For a car fresh from Japan the registration document would be the Export Certificate I talked about in my previous importation guide. If the car's coming in from Canada, the UK, or some other country then you should have a copy of the relevant registration or title paperwork from that nation.

Let's summarize the forms we have so far:

If you're importing the car yourself in person at a land border crossing that should be all you need but if the car is being imported via a commercial land carrier or through a maritime port of entry then there'll be a bigger paperwork shuffle and in those cases you'll be needing a customs broker to handle all of that. We'll go over the role of the customs broker and the money you'll be forking over to Uncle Sam in the next post. Until then, drive safe all you car guys and car gals out there!