The Show or Display Import Law for Dummies Part 6: Bonus Round! 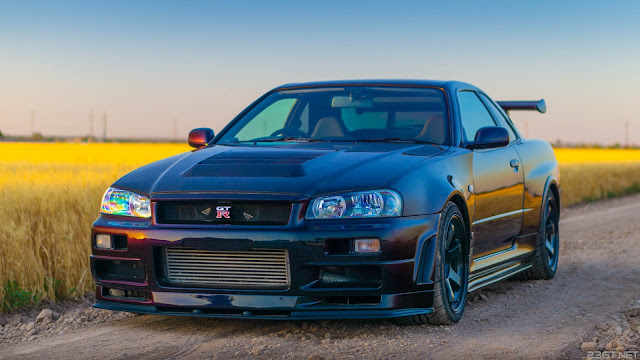 Last time we had already covered the whole process of importing a Show or Display R34 from what the law is all about to finding a car and eventually getting it imported into the US of A, so what's this last article about? Well this time I'd like to cover some tidbits I learned from the NHTSA about the process including how it's handled at their end after an application is received, plus a few little bits of advice that may be helpful or at least informative.

First, let's talk about what happens to an application when it's received by NHTSA.

When a new Show or Display application to import a particular car – like my Midnight Purple 2 R34 for example - arrives at the NHTSA's Import and Certification Division it's first checked by one of the staff to see if its got the basic requirements all taken care of . As a start they want to make sure all the appropriate sections of the form are filled out and the relevant attachments are included like the insurance papers, pictures, and paperwork about that specific vehicle. Interestingly the application doesn't specify that any sort of proof of ownership is required such as a bill of sale but they informed me that's something they generally request. I didn't find out until afterwards but I included my bill of sale when I first sent in my application since it sounded logical they'd need it – and I'm glad I did because it was one less item for them to request later on for me to send.

Speaking of items they might request later on – the NHTSA is free to ask for more documentation from you if required besides the stuff listed on the application. They often ask for more pictures. In the case of R34s, they are now routinely asking for pictures of the firewall with the chassis plate visible as well as photos of the engine bay. Those aren't mentioned in the application but they did request them from me later on so if you're in the process of applying it's a good idea to send them in the first place.

Assuming your application has all its i's crossed and t's dotted it'll then get assigned to one of the analysts for review. It's at this point that they scrutinize the actual information that you submitted to make sure that it all checks out and decide if more stuff is needed like those extra photos I mentioned. No, they will never request photos of you in the car with only a hand-written cardboard sign to cover up your shameful bits with the words “Yo, this is for reals my Nissan Skyline! Love you NHTSA!” as proof that you really, truly own an R34 - so you can delete those from your phone already, or maybe post them on Instagram if that's your thing.

Instead of potentially shame-inducing selfies the NHTSA will generally ask the manufacturer to independently verify the data you've submitted as proof the car is what you say it is. This step is particularly relevant for R34 owners because as I mentioned in a previous part of this guide Nissan no longer gives swanky letters to individual owners as production verification. I was told that generally an analyst will need only about a week or so to finish reviewing an individual application for any one particular car but in my case a lot of other MP2 owners submitted around the same time and also it took some time to get the verification from Nissan. This meant my application took a couple of months to get done rather than the typical three weeks or so.

Once the analyst is done going over the application and is satisfied it then gets sent up the chain to the division chief where the actual approval letter is written up and gets signed. That letter is then scanned and gets emailed to the owner who then gets to jump around like a kid with ADHD on a snow day.

I've yet to meet anyone with a denied application so I can't tell you what happens then but apparently it's a rare occurrence as long as the car is in good shape and hasn't been radically altered. Presumably if a denial does occur someone will be needing to be kept away from firearms and sharp objects.

And that in a nutshell is what the NHTSA does with a Show or Display application. It doesn't get dumped into someone's inbox to be held for all eternity until the owner decides to mail an envelope of non-sequential Benjamins to move things along like you might have been thinking.

Now here's a couple of extra little tidbits my sources at the NHTSA told me about that I thought I'd pass on since they're interesting and maybe relevant to some of you.

First off is something I honestly had not thought of: if you're applying for a car to be imported for Show or Display the condition of the car is important. Since you're basically saying that you want to import a car to show off to other people well then it stands to reason that the car has to look good enough to show off. I'm fairly anal about keeping my cars in good order so truthfully I never really gave much thought to this but when you think about it it's only logical that the NHTSA wouldn't approve a car if it's not in good shape because then it won't be worth displaying – which is kind of the whole point of the Show or Display exemption.

What does that mean in practical terms? It means that if a car you're planning on applying for has obvious damage or otherwise needs significant work to look presentable then it's not going to be approved. A barn find car won't cut it for example. You'll want to get it repaired or restored before you actually apply or else you'll just be wasting your time. So yeah, before taking pics of the car get it cleaned up, make sure that “Camry dent” in the rear bumper's been popped out, and the nest made by that pair of racoons and your ex-girlfriend in the passenger seat has been removed.

You'd think something like that would just be common sense but as 2020 has so far proved some things cannot be relied on to be common sensical to many people.

The other tidbit I wanted to share was regarding who can apply for Show or Display importation. The NHTSA specifically cleared up that only individual owners can submit an application for a car, not companies. So for example, if an import company found an MP2 R34 that they thought they could make a nice juicy profit on they wouldn't be able to apply to bring it in under their name – they'd have to either first find a buyer and have him apply, or a representative of the company like the owner would have to apply for the car under his name.

This is why when I tried to apply for mine Sean Morris from TopRank Importers told me that they could help with importing my car once it was approved but I would have to get the approval first myself as the owner. He was a big help in figuring out the process so if after reading this guide you're still at a loss about what to do then you may want to give his company a call for assistance.

And that's about all I have regarding Show or Display. If you happen to be one of the lucky people with an R34 that's waiting to get its immigration papers I hope this guide has been a big help. If there's something you're not clear on I'm happy to try and answer your questions if you reach me through the site's contact form or via email at 23gtblog(at)gmail.com. Until the next post, drive safe everybody!