The Show or Display Import Law for Dummies Part 4.2: Call of Duties

Last week we left off after going over the basic paperwork needed for importation. Today we'll discuss the fees you should expect to pay and the role of a customs broker in this process.

So first off, what does the customs broker do? He acts as a go-between for you and U.S. Customs, handles certain paperwork and fees a regular person can't do, and can act on your behalf in places you can't access such as inside the port where they won't let just anyone in for security reasons. In my case I had to use a broker since I couldn't cross into Canada myself to bring the car over because of COVID and because I apparently crack too many jokes about our friendly northern neighbors, eh.

With a commercial carrier handling the car's entry a bond fee will need to be paid. Your broker should go over the different types of bonds and what they would cost you - in my case a "continuous bond" proved slightly more economical and cost about 500 dollars.

The broker will also prepare a customs invoice that lists what the commercial carrier is bringing in – including any additional stuff entering with the car like spare parts - and how much it's all worth. There might be some other forms you need to fill out specifically for the shipping company and the broker but they should go over all of those with you.

Using a commercial shipper and a customs broker of course will cost more than taking the DIY approach but you can generally rest assured your car's importation is being handled by people who know what they're doing and you just have to sit back and wait for your baby to cross into the country and show up at your doorstep ready to say “I'm proud to be an American!”

Show or Display is a pretty esoteric method of importing a car though and most customs brokers will never have handled it before. Take it from me, it can be a real pain in the 'nards to try and find a good broker. Some of them will act like they know everything and that you, the stupid non-customs-handling plebe, don't know crap even when you try to correct them about the unique aspects of Show or Display. I gave up on one well-known brokerage firm called Cole International when their agents acted like that with me and kept insisting that it wasn't possible to import a car just for show or display purposes.

Even the broker I ended up using took a little convincing by sending them the relevant documentation from NHTSA and CBP to show that yes, such a process existed. To their credit, they listened to me and didn't immediately act like I was a misinformed idiot like the other place. Once that got sorted they handled my paperwork efficiently and everything went totally smoothly so if you need a customs broker with experience importing a Show or Display car give Jones and Jones customs brokers a call. They were one of my first choices to contact because they're based in Blaine, Washington and my car was coming into that state from Vancouver but they can handle other US ports of entry too.

Right about now you're probably wondering what fees you'll need to pay to import your dream car. Regardless of whether you enter the county with the car yourself or you have a third party do it for you there's one very important fee you have to pay – the customs duty. Think of that as your tax for importing a car from another country and the government's way of saying "Dude, what's wrong with you? There's plenty of good cars in the country already!"

That's just like asking me why I have the hots for Japanese voice actress Kana Hanazawa when there are plenty of lovely women in the US of A. She's a total cutie and I just dig her, Mr. Government Man, so lay off!

There's two ways of calculating the import duty for an import car. First is a flat rate of 2.5% for automobiles and a whopping 25% for trucks. Right about now you should be thanking the car gods that Nissan decided to make a competitor for the Porsche 911 instead of the GMC Syclone or else you'd be paying ten times the customs duty. But you'd be able to haul that load of gardening soil back from Lowe's a lot faster so maybe it'd be worth it to you.

Anyway, that rate is calculated against the purchase price of the vehicle listed on your bill of sale. So let's say for example you paid $100,000 for your hard-to-find Midnight Purple 2 R34 – your customs duty would be $2500. Simples.

There's another way to calculate the customs duty though but it's only applicable if you're crossing over with the car yourself. When you go outside the country on a trip and come back, as a citizen of our dear Eagleland you're given an exemption on paying duty on any stuff you may have bought overseas, up to a certain amount. As long as you bought the stuff for your personal use and you got it DURING the trip you're coming back from Uncle Sam will do you a solid and not charge you for treating yourself to something nice – as long as it's not TOO nice 'cause y'all can't be buying them fancy Tag Whorers and Luis Bittens and expectin' to get them in for free.

According to the CBP's official webpage on car importation, yes, you can even apply that exemption to cars. You only get an $800 exemption though so it doesn't get very far since whatever's over that eight hundred bucks is still dutiable. The calculation is a little bit more complicated than the flat rate I mention above because after the $800 exemption is removed, the first $1000 dollars of the purchase price is dutiable at THREE percent instead of the standard rate, and then the remainder is assessed via the normal percentage.

So that means that if you make use of your personal exemption you can save a staggering fifteen bucks! Enough money to treat yourself to a Belgian Waffle Slam and a Coke at Denny's!

Okay, it's not much but you know what they say “A penny saved is a penny that can go toward that sweet HKS turbo kit”...or something like that. There are a few important caveats though that make taking advantage of the exemption harder than it may be worth. First, the customs exemption only applies to items that are coming into the country simultaneously with you and were bought on that same overseas trip. So basically this will only apply if you're lucky enough to find a car in Canada, go over there and buy it, and then bring it in straight away. You could do that with a 25-year old car but that ain't happening for a Show or Display car since you have to apply for the approval letter first and it takes weeks to months to get that. I mean, sure, you could conceivably go to the Great White North, buy an R34, and take an extended vacation until you can get the car approved but that's probably not worth doing just to save a few bucks of customs duty.

Second, some customs agents aren't aware that the exemption can be used for vehicles so even if you ask for it to be applied they may say you can't do that. They'd be wrong since the CBP website explicitly says you can but arguing with a CBP officer to save a few bucks is also probably not a wise move. I mean, the dude's got a gun, bro.

If you're importing a vehicle yourself the customs duty should be the only fee you need to pay. With a commercial entry though you'll have to pay the broker's fee, the bond fee I mentioned earlier, and a merchandise processing fee (that's a fee of a very weird 0.3463 percent on any goods imported by commercial carrier), plus maybe a couple more small charges that your broker will explain to you. That's on top of whatever you had to pay in shipping for the car.

Once the appropriate payments have been made and the CBP officer is satisfied your car is legit you'll get the forms back – possibly with a CBP stamp on the HS-7 and 3520-1 although CBP has informed me they're no longer required to do that – with the addition of CBP form 7501. That form is the Entry Summary for your car and lists the details of how it entered, the fees paid to the government, the importer's details, and should be stamped saying the vehicle was released. For a JDM car it'll also be stamped saying the car is “non-conforming at the time of import” - meaning it's been allowed in without having to meet DOT safety standards. Your customs broker will prepare the form 7501 and include it with your car's other forms if the car is entering via a commercial carrier but if you cross the border with it yourself CBP will fill it out. You can see a redacted copy of mine below as an example. 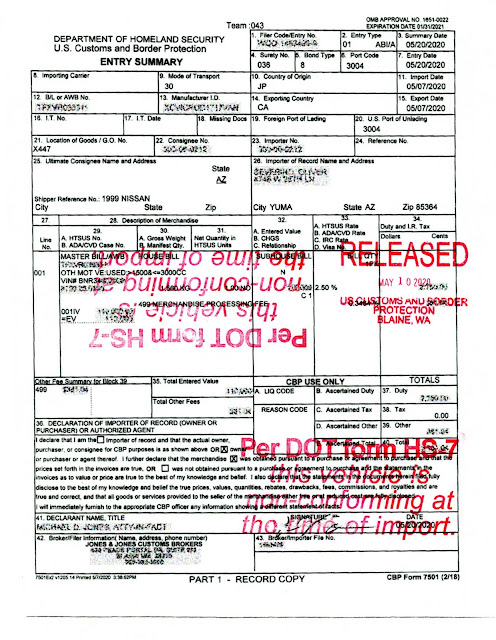 Having acquired this nice stack of paperwork for your car – and getting the vehicle to your abode – the next step is something most people like to do about as much as swimming through raw sewage while wearing a protective suit made of discarded Walmart shopping bags: Going to the DMV. Ugh.

Anywho, we'll talk about that next time and I'll try to give you some tips to keep your sanity intact. Until then, drive safe!