Progress Bar: R32 Part 5 – The Ecstasy And The Agony

This should have been a joyous post about how I picked up my R32 from the paint shop and now I could regale you with photos of its lustrous paint job and indeed I'm going to do just that – at least for a start. However, even the best old cars have a way of giving you headaches when you least expect it and that's exactly what happened this time.

But first, let's start off with the good and let me have you gaze upon the freshly-painted glory of my Nismo as she deserves to look: 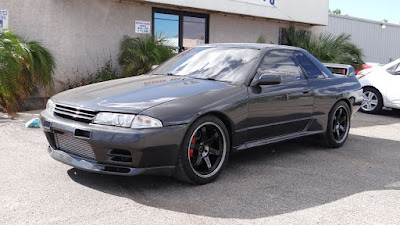 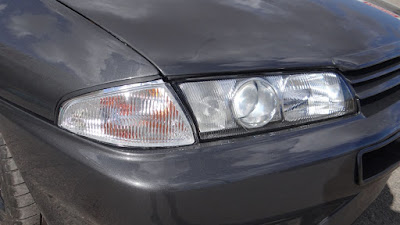 You may have noticed the different lights on the front. I changed the old broken N1 headlights for a used but great condition set of the original headlights that came on the Nismos and paired them with D-speed clear corners. I think it quite nicely makes the front end look more up-to-date. 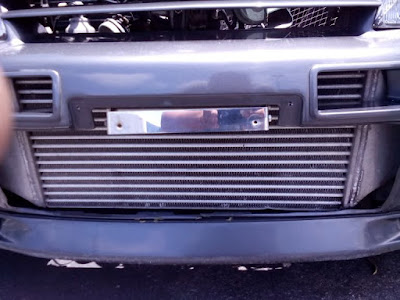 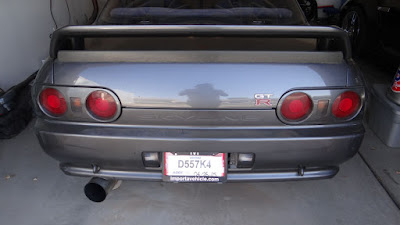 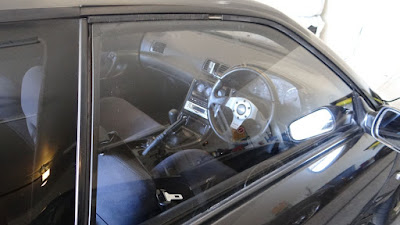 Now, lets get to the bad part. She was running fine as we moved her around for those photos and I was all excited to show the new paint job to my friends but then after driving off from the shop she started running a bit rough. After a little bit I noticed white smoke from the tailpipe when I would give her some gas. You can just imagine the expletives that were running through my mind then.

The bad words started really flowing when the car suddenly lost power and I ground to a halt. Luckily I was able to pull it to the side of the road but after I did the car would crank but not start again.

After some trying the car wouldn't crank at all anymore and I had to admit defeat and call for a tow. There were no obvious signs of the issue, no warning lights beforehand, no gauges out of whack, and no leaks in the engine bay or under the car. Maybe the battery lost charge but that wouldn't explain the smoking.

My friends at the local Nissan dealer had called for a tow truck but luckily one from another company happened by as you can see from the picture. He had a regular tow truck and couldn't tow me so I said I'd have to wait for the flatbed the dealer had called since the GT-R is all-wheel-drive. The cool thing with John, the driver who pulled up is that he offered to wait until it arrived and keep his lights on to warn traffic especially since drivers in my town are apparently such idiots that they'll pull right up to a stopped car before realizing it's dead and they need to go around it (even with the hood up! Morons.)

After a bit of waiting during which I notified a couple of friends, the tow truck called by my friend at Nissan wasn't there yet and John offered to get a flatbed from their nearby shop and tow me to the dealer for just 40 bucks. At that price I said “Sure!” and pretty soon the flatbed arrived. And this is where the next pain in the ass part began. On an R32 GT-R you don't have the convenient panels in the front bumper that hide a tow point like most cars have nowadays. Instead you have to remove the front splitter to get to the two front tow points underneath the front of the car. Lucky for me I had read the service manual and knew that but it didn't make it any easier to lie down on hot tarmac for about an hour fiddling with the splitter to get it off (the body shop had fastened it down tight with a variety of fasteners – it wasn't going to fall off but it was a b*tch and a half to remove).

Again, luckily the two tow truck drivers were cool about it and lent me their tools and even broke out a race jack to lift the car enough so I could undo the front fasteners. Also a friend of mine had shown up after hearing from the local grapevine I was stuck on the road (I hadn't even called him up) and helped with the process too. After the lip came off the tow guys very carefully loaded the car and then my friend awesomely gave me a ride to the dealer to make sure the car got dropped off and then gave me another lift home.

After giving the car a cursory inspection the following day Nissan said it started right up after charging the battery but it still smoked when it ran. Since they were swamped with work and couldn't get to a thorough evaluation including a compression test yet I said I'd have my friend with the local race shop come take it and check it out himself. So he's scheduled to take it tomorrow to his shop and then I'll keep my fingers crossed but at the same time I'll be steeling myself for the bad news that a rebuild is in order. Ugh.

On a positive note, I was planning on a rebuild anyway since the car's so old but not until many months from now once I finished with cleaning her up. So now I'm awaiting my friends verdict and weighing my options. I know this is going to cost me a bundle but I'm trying to look at it from the best possible point-of-view and see it as a chance to address something I needed to do anyway. It's a bummer right now but my car will end up better than before once we get over this hurdle. Maybe we'll tackle the rebuild ourselves, maybe I'll find a tuning shop to do it, or maybe I'll say screw it and swap in a newer RB26 lol. We shall see.

I know one shop it won't be going to is SP Engineering in L.A. I called them up after I heard the bad news from Nissan since I had considered sending the car to them once my original plan called for a rebuild. I figured I'd get an idea of the cost if I had to do it now and the guy (named Chris) quoted me an unbelievable price (unbelievable even for someone like me with a fully-built 800whp R35) and was rude at the end too. A far cry from the great service I've gotten from TopSpeed Motorsports, ACG San Diego, Speed4Sale, and other shops I've dealt with in the past. Oh well, my money is better spent elsewhere than a shop that can't even treat a potential customer right.

So anyway, I hope to update with a future progress post with better news and a plan for going forward. Ending on a good note I'd like to thank A&A Towing for all the help and being so careful with my car, my friend Jason for showing up without being called, helping with the lip removal, and giving me a lift, and my local Nissan dealer Sonora Nissan for checking out the car ASAP even though they were super busy with an inspection from Nissan corporate going on. Overall, I still consider myself lucky that these great people helped me out so much at such a bad time.

And it could be worse, at least I'm not in the hospital after my car decided to barbecue itself with me as the juicy meat filling. That's a win in my book!