If you've been following my Progress Bar posts you may remember a while back that for the sake of a long life for my R32's engine I had a 100K service done and the timing belt and water pump were swapped out (Of course, it didn't prevent my recent engine troubles but that isn't cooling related). If you've been researching RB26DETT parts you've probably heard of the N1 water pump that's supposed to be an upgrade to the original design. You may wonder therefore why I decided to go with an original water pump instead of the N1. I explained the basic reasons in my Progress Bar post at the time but I thought it was worth going into more detail about it in case anyone still thinks I made a backwards choice. Let me assure you there were solid reasons for the decision and none of them involved a tall, open bottle of Absolut Vodka (the one I was given as a birthday gift is still on the kitchen counter unopened I'll have you know!).


So, the N1 water pump is a race part therefore it must be a better choice right? Because racecar and all that after all. Well, not really. As with many things in life, it depends. In this case the choice of water pump should be dictated by your plans for your car and a few other factors.


What's the difference between the N1 and the regular water pump in the first place? The main difference is the addition of what's referred to as a “cavitation plate” behind the impeller. Yeah, yeah, technical terms I know. In simple terms the water pump in a car works like those water wheels you see in Dutch travel pamphlets and the occasional Roman aqueduct. The impeller is the piece inside the pump that whirls around thanks to the rotation provided by a drive belt coming from the crankshaft. As the impeller rotates the little blades on it start pumping the coolant (or plain water in prehistoric times) throughout the engine keeping it cool and maintaining a minty fresh breath (okay, that last part is a lie).


The cavitation plate is a flat piece of metal that was put behind the impeller on the N1 water pump to prevent the stuff it's named for – cavitation. In case you've never heard of it, cavitation isn't what happens when you forget to brush after snarfing down a load of Starburst and Gummi Bears. As a little kid you probably messed around with stirring a glass of water hard and noticed bubbles starting to form – that's cavitation. As you can imagine, running an engine hard causes the impeller to rotate faster and when that happens cavitation also happens and when that occurs coolant flow can be reduced because of all the bubbles starting to form. 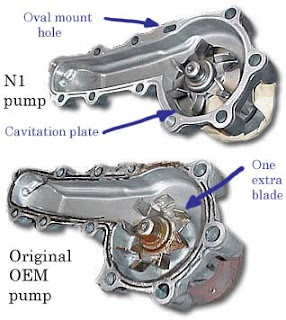 Since the N1 cars were meant for endurance racing where the engine is run at high rpms for long periods of time the N1 water pump added the cavitation plate to help ensure good coolant flow. In addition to the added plate, the N1 pump also subtracts something – one less blade on the impeller. The remaining  blades are slightly larger in surface area though.

So, a little bit of logic points us to the big reason you want to think carefully about which water pump to get and not just buy the one that's “race car part, yo!” - the N1 pump is designed to work best at high rpm while the original is designed for normal use. That means the N1 should flow better at high revs but in street driving it'll flow the same or maybe even slightly less due to the lower blade count. What are you going to be using your RB26 for? If you're getting ready to assault the 25 Hours of Thunderhill, get the N1 and more power to you – and be sure to post pics! If not, you're probably better off with the regular pump if you're just doing normal street driving.


Oh, but there are two more reasons to pick one over the other. First, the N1 pump has slightly different mounting holes than the original. If you look in the picture you'll see that on the upper part of the N1 one of the originally round holes is now a longer oval one. The N1 pump was of course designed to fit an N1 engine block so that hole fits fine on one of those but on a regular RB block that larger hole can leave a gap opening into one of the cooling channels in the block and allowing coolant to leak out. You can fill it with RTV or weld a plug but that's extra work so think carefully if you want the added bother.


Second thing is the all important consideration of moolah. The N1 pump usually costs about 200 bucks while the original can be had for half that. That's a big difference for potentially no advantage. Maybe you've got baller money and don't mind but for most people that extra money can be better spent on other car parts or a trip to the local crafts store for more needlepoint supplies. Now, I should point out that many street-driven Skylines have done fine with N1 pumps but you have to decide yourself if you want to spend the extra dosh for no real-world benefit.


I don't know what I did with the money I saved in my case – maybe I was drunk at THAT time.