Why You Don't Want To Buy A Skyline...Yet 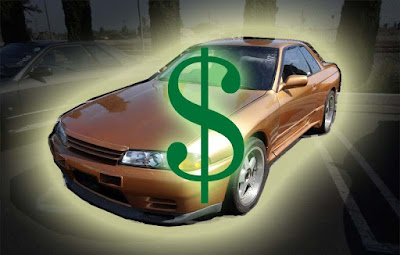 It's no secret that right now the importation of Skyline R32s into the United States is a seller's market. This was inevitable after years of pent-up demand being stoked by multiple Fast and the Furious movies and the Gran Turismo racing game franchise having included so many versions of the Skyline that even Porsche has started taking notes on how it can make the 911 lineup even more confusing. With seemingly every Manny, Moe, and Curly Joe rushing out to buy his very own piece of JDM tin prices have skyrocketed to the point that cars that previously sold for the price of a well-riced old Civic are now changing hands for the price of a well-optioned new one.

The demand has even caught the attention of major car blogs with both Jalopnik and Autoblog publishing articles recently telling us gaijin that we need to stop pissing in Japan's miso.

As more and more word has gotten out about how it's now legal to bring in an honest-to-Kami-sama Nissan Skyline prices have steadily risen over the past months as demand has kept up. A quick search online shows some eBay sellers are asking for 30 grand and up for GT-Rs while rear-wheel drive GTS-ts are now being peddled for what a GT-R could fetch a year ago. Importer prices have also gone up – if they have any to sell. Japanese Classics, featured in Motorweek and Jalopnik, didn't even have a Skyline GT-R or GTS-t listed in its inventory when I checked earlier this week, just a lowly GX-i four door with a little CA18 four-banger – and even that's sold (hopefully to have an SR20 plopped under the hood for a lovely sleeper).

In other words, if you want a Skyline R32 right now you'll likely have to pay through the nose and you can't just say it's because importers are being greedy – auction prices in Japan are much higher than before to begin with as everybody fights over any car that comes through the bidding lanes.

So what's a young JDM aficionado to do with that wad of cash he's been saving up underneath his mattress beside the well-worn copies of Penthouse and Import Tuner? Time to just give up and make it rain at the local strip joint?

Of course not. As Obi-Wan Kenmeri would say “Patience, young wheelman”. If you keep an eye out there are still deals to be had, as demonstrated by an acquaintance who scored a GT-R well below market value at auction recently.

“But those are few and far between and besides, all my luck was used up when I won an LCD TV at church bingo the other night!” you might say, if you weren't so busy playing Rocket League on your PS4 and aforementioned new LCD TV. Well, again, patience will bring hope because as time goes by and more and more model years become eligible for import prices will inevitably settle and likely drop. It's only logical and is a consensus shared by importers as you can see from the Autoblog article.

Inevitably also some owners that have already bought Skylines will sell them on as the early enthusiasm wanes and the realities of having such a unique but old car settle in. We Americans tend to want the current cool item du jour whether it's iPhones or I6-powered Japanese sports cars and this consequently leads to some early adopters giving more patient buyers a great deal.

Some other food for thought is that some of the most desirable R32 Skylines have yet to become legal. Why settle for a plain GT-R when you can have a VICTORY SPECIFICATION! Yes, say it with me, VICTORY SPECIFICATION! Rolls off the tongue nicely don't it? That's not to say the V-specs are that much better but it does sound cool, and if you can score one for less because you waited rather than get caught up in the early hype then so much the better.

Having mentioned the V-spec, we have to address the other side of the coin – Skylines you SHOULD buy now. Whereas more easily obtainable versions of the Skyline will inevitably settle in price, the rare models like the Nismo and N1 are likely going to remain elevated, if not go higher, as time goes by. When you have model runs in the hundreds and 25 years for those few cars to be dispersed all over the globe and some of them to be rendered non-existent any more (moment of silence for those few...sob) the collectibility factor starts going through the roof. If you want one and can luck into finding a Nismo, N1, or maybe even an Autech for any sort of realistic price, grab it now because it's unlikely they'll ever be significantly cheaper. Store it if you have to until it's legal to import because it's worth the hassle versus never finding one again.

And so, far be it for me to discourage anyone from buying a car that they truly desire but if you want a Skyline or other JDM car right now, get dressed in your best “I'm gonna be patient” clothes and wait for the right deal to come along. These current insane prices won't settle down until fewer people respond to them with “Take my money!” so fire up some Gran Turismo and let that tide you over until the right car comes along at the right price. Happy hunting!