The Suzuka 1000Km last Sunday started out looking promising for the Nissan GT-R camp with the defending champion #1 Motul Autech GT-R managing to snag pole despite a massive weight handicap. The #46 S-Road MOLA GT-R and #12 Calsonic Impul GT-R were also well-placed in fourth and fifth respectively.

Heavy rains at the start meant the race was going to be unpredictable and that proved true from the off as the third-place-starting #64 Epson NSX capitalized on having no success ballast penalty by cracking off a quick start that saw it take the lead before the first lap had finished. The Epson NSX looked strong but its early pace faded after a slight off and then other NSX runners started coming to the fore. First the #15 Drago Modulo car hit the front then it was succeeded after the first round of pit stops by the #100 Raybrig NSX that had started from second-to-last in the GT500 grid!

The NSX runners looked set to finally score an elusive win after struggling all season and it would be even sweeter getting it at Honda's home track and in the biggest race of the season but after the rains stopped roughly a third of the way into the contest their pace started slacking off. Drying conditions favored the Lexus and Nissan cars again and the #36 Petronas RC-F took best advantage after a first safety car interval put it in the lead after another round of pit stops. The Lexus never relinquished the lead except for the odd pit stop and eventually came home with a huge margin of over a minute to take the win. The race had to be ended on a time limit due to two prolonged safety car periods. 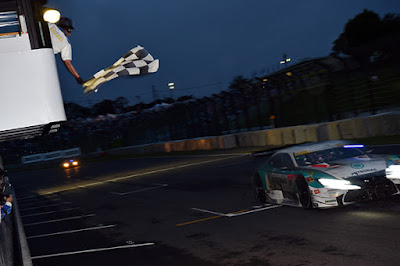 The GT500 GT-Rs had a tough time that was very much in contrast to the last few races. The #1 car was keeping in contention early on but a forced evasive maneuver by Tsugio Matsuda to avoid a backmarker landed it in the gravel of Turn 1, losing considerable time. It fought back valiantly but ended the race a lap down in seventh. Five valuable championship points were at least salvaged.

The #46 S-Road car managed to finish only one place ahead because of an unfortunate pit strategy that saw it have to make two pit stops close together in the first third of the race after the drying track made it necessary to change to dry tires after they had just put on full wets.

Coming off worst was the #24 D'station GT-R that had just scored a win at the previous round in Fuji. It was off the pace early on in the wet conditions but the drying track brought it serious speed again. A loose wheel after a pit stop ruined its chances however and saw it fetch up a lowly 13th.

Some consolation was brought by the #12 Calsonic car. Despite dropping back early on in the wet, it fought back in the later stages to catch up to the sharp end of the pack, ultimately finishing in third.

The podium finish meant the #12 car extended its lead in the championship, only now with the #38 Zent Cerumo Lexus in second at seven points back thanks to a second place finish in the race. The #1 Motul Autech GT-R that was second in points lost ground and fell behind the #36 Lexus to end up fourth in the rankings.

The race may not have favored the GT500 Nissans but it was a whole different story in GT300. The championship-leading #10 Gainer Tainax GT-R started in second to the #2 Syntium Lotus Evora. Despite the good qualifying pace the #10 car rapidly dropped down the order early on and was far outside the points positions after the first third of the race. Like the GT500 cars however, the drying conditions brought the speed back and the GT-R rapidly started closing back up to the leaders. 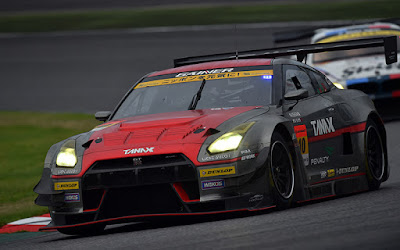 The lead kept being swapped and misfortune seemed to befall one front-runner after another. The Lotus that had led early on got a 90-second penalty that dropped it far out of contention. The #55 Arta CR-Z briefly inherited the lead after the Evora's penalty only to spin on a coolant spill from a wrecked car. Meanwhile, the #61 Subaru BRZ and the #31 Prius apr GT had been the main rivals to the Lotus until the Prius had a spin during the second safety car period and got a penalty of its own.

Early in the second half of the race the #61 Subaru had the lead but after a round of pit stops the #10 GT-R had amazingly made up a massive amount of ground to take point. All of this despite a massive 88 kilo weight handicap! The Subaru would fade somewhat to finish third while the #7 Studie BMW Z4 had recovered from a penalty of its own to put in a late challenge to the Gainer GT-R. At the checkers the top two cars had been battling with just a second between them but the #10 car skillfully hung on for an amazing win despite its early drop in the standings and large weight penalty.

The win was the second for the Gainer Tainax GT-R this season and gave it a dominating lead in the championship with 31 points over the #3 B-Max GT-R that had been nowhere in this race. Unfortunately the win also brought a mind-boggling 138 kilogram weight penalty for the next race. Victory also brought a curious situation in the GT300 points rankings – although nominally the #3 GT-R is the closest rival to the Gainer car, the second and third positions are actually held by drivers of the latter. Because Andre Couto has had different co-drivers at different events but the team has performed so consistently well, the #10 team finds itself in the unique position of having three different drivers of its car in first, second, and third place in the rankings. The B-Max drivers are actually in fourth.

This means that the #10 car's rivals have a mountain to climb with three races left in the season. With that enormous amount of ballast it remains to be seen whether the Gainer crew can keep up the pace though. In GT500 the Calsonic team may score its first championship since the series became known as Super GT instead of JGTC but they'll have to maintain their consistency as their lead is nowhere near as large as their GT300 counterparts. All of this means that the final third of the season still has a lot to play for!