Celebrating The First Ride Of The Season

Last night we finally got a properly cool day here in my part of Arizona and I decided it was a good time to break out my other beloved piece of vehicular obsession – my 2006 Suzuki GSX-R750 sportbike. 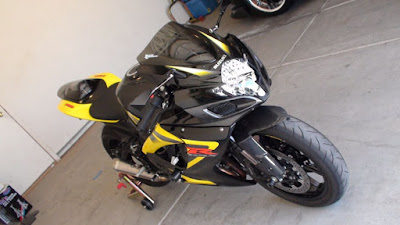 Although cars will always and forever be my foremost love when it comes to transportation I've long been fascinated by two wheeled systems for injecting adrenaline and same as I'm a fan of Nissan for automobiles I love Suzuki for motorcycles and as GT-Rs do it for me with Nissans, GSX-Rs are their counterpart with Suzuki. Since getting my Gixxer brand new 9 years ago (Wow, has it really been that long?) I've modified it gradually with an Arrow titanium exhaust, Marchesini forged wheels, Rizoma mirrors, lights, and rearsets, a Power Commander V, some carbon fiber here and there, plus some other bits and bobs so that it's like a two-wheeled version of my modded R35.

I don't get to ride as often as I used to unfortunately, partly because of time constraints, partly because a crash at the track years ago left me with traumatic wrist arthritis that's made long rides uncomfortable, but also because when your weekend car is an R35 GT-R that accelerates and turns with the speed of a sportbike but with AC, and stereo, and leather coddling you it sort of makes you spoiled. Nevertheless, the first ride after a long time without one still brings back that special feeling that got me into bikes in the first place.

It's been a particularly stressful few weeks recently with work, social commitments, and the mechanical gremlins afflicting my R32 so I needed a break from it all. When the rough patches hit I usually just have to tell myself I'm still a damn lucky bastard in that first-world problems are all I have to worry about and I'm not some poor kid back in the Philippines where I grew up, wondering where his next meal is going to come from. Sometimes that kind of self-counselling still isn't enough to break you out of your funk though and to cure that few things beat seven-hundred fifty cc's of high-potency antidepressant.

If you've never ridden a motorcycle seriously it can be hard to believe the ability a good ride has, even a short one, in bringing you some clarity. The worst way stressful things affect us is when they never leave our minds and we're continually worn down by them. In a situation like that you really need to take a step away in order to take a break and hopefully gain a better handle on things. It's not always easy to clear your mind of the everyday clutter and static but a motorcycle ride is a great way to do just that.

The act of riding a bike, especially a superbike, simply takes so much more concentration that your focus shifts to that task alone. Cars, especially the modern ones that are so easy to drive, tend to encourage your mind to wander but bikes, oh no, not if you want to keep the rubber side where it's supposed to be. In a car, or “cage” as bikers like to refer to them, you're surrounded by a mass of steel and glass and plastics all designed to keep you safe and to a certain degree isolated from the world around you. You have four big tires to keep you in the appropriate vertical orientation and you have AC to nullify the effects of weather while a comfy seat cups your body like a fluffy cloud held up by cherubs – cherubs with a masters degree in ergonomics and an extreme obsession in designing the perfect climate-controlled car seat that will leave your ass comfy without giving you weird feelings in the nether regions.

On a sportbike that's not the case. You're acutely aware of everything. How loud your awesome race exhaust is that's surely contributing to future hearing loss. How vulnerable you are with only a plastic brain bucket and a few millimeters of dead cow between you and certain doom. How the weather could stand to be a few degrees colder or warmer but you can't do crap about it because only God has access to the buttons for this climate control system. How the guy who designed your seat surely had to have been a eunuch for all the consideration he gave to your wedding vegetables. How that lady in the Escalade behind you is probably going to test her front bumper integrity on you at the next stoplight because she's too busy yakking on her cellphone. The wind on your body. The sun on your face. The exhilarating rush of bending your body into a turn. The 1-2 degree cooling in temperature as you leave the city behind that you can FEEL instead of just see as an abstract change in numbers on some display inside a car. All of that you're acutely aware of and it leaves no room in your small, previously-stressed out head to worry about the problems that were threatening your sanity before.

At the end of it all when you roll back to your house you hop off the bike and suddenly it seems like things are calmer. The problems may still be there but you feel more ready to confront them. Mentally you feel more free, like the stress that weighed you down before fell off the back of the bike and left you fresh to face things anew. It's a feeling you don't get easily with an automobile and that's why as much as I love my cars, there will always be a special spot in the garage for a motorcycle. 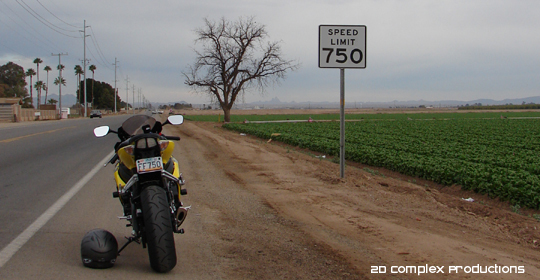