I did this job on my R32 ages ago and have been meaning to get around to posting a DIY but other stuff kept happening, one thing led to another, and next thing you know I'm writing about changing spark plugs on my car after its motor has already developed a case of leaky-cylinder-itis. Yes, this post is very timely. Ah well, better late than never I guess.

So, changing spark plugs on an RB26 is a fairly simple process. It helps a lot that the RB is a straight six so you have easy access to all the cylinders because they're all pointed up and all in a nice row unlike other motors where getting to the spark plus can only be described as a task suited for masochists (cough, boxers, cough).

Before we start on the process you might be wondering when you need to do this. The R32 service manual recommends doing it every 100,000 kilometers. If you just got your car it's a good idea to do it as a precaution even if the mileage doesn't require it because looking at the plugs can tell you if there may be any issues with how the car is running. Of course, some R32's won't have accurate odometer readings or come with service records so those are more good reasons to do it right away.

To do this you need just a few tools and supples: 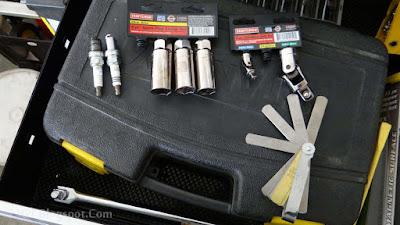 So, begin by popping the hood on your car. Yes, I know that sounds obvious but I wouldn't want you trying to work out how to do this from underneath your car would I?

Whenever doing something related to the electrical system on a car it's not a bad idea to disconnect the battery but for something like changing plugs where the chances of shorting something out or shocking yourself are very low most people tend to omit this step. If you're new to working on cars and want to take the extra precaution feel free to do so – it never hurts to play it safe.

In order to gain access to the plugs you need to undo the coil cover that's in the middle of your engine – that's the plate in the middle that says “Nissan” on it. This comes off easily just by undoing the eight allen bolts that hold it down. On an RB26 you can get straight to undoing the coil cover but on an RB20 or 25 there's a bit more faffing about needed because there's a crossover pipe in the way that you have to remove first. Ah, the perks of GT-R ownership.

After undoing the bolts you can't remove the cover entirely unless you disconnect the igniter module on the back end of it. That's the square metal thing with two connectors on it. You can undo the connectors and unbolt the igniter if you'd like or if you're a lazy git like me you can just leave it be and just lay the cover off to the side carefully. (On a side note R34 GT-R motors did away with the separate igniter module and switched to coil packs with integrated igniters. There's a chance your car won't have an igniter if the previous owner had it converted to the R34 setup).

Once you can see under the cover you'll find the coilpacks which are the wonderful gizmos that supply the plugs with a nice jolt of juicy electrons to actually create the spark that burns all that lovely dinosaur juice and create horsepower. Each coilpack has a connector on top that connects it to the coil harness. Take this chance to inspect the coil harness wires and see if any have obvious cracking on the insulation. The RB26 is known to develop ignition issues with time and an old frayed harness is a common cause. If you have that problem buy a new one – preferably a more durable one like a Do-Luck or a Wiring Specialties unit – and replace it. Sealing a frayed wire with some electrical tape until you can get a new harness is acceptable but replace it as soon as you can.

If your harness is okay, undo the connector for the first coilpack you want to work on – just push down on the tab and pull it off. It doesn't matter which one you start with but it's good to start from one end to the other in sequence and do one plug at a time to avoid confusion. After you undo the connector there are four philips screws holding down the coilpack – undo those and then pull out the pack. Inspect it for any obvious breaks in the rubber covering. Some people advocate wrapping coilpacks in electrical tape but I'd be wary of doing that – the valley where the packs reside gets really hot and you don't want a gooey mess of tape as a result. Coil packs in good condition shouldn't need taping up.

Now you can see the top of the actual spark plug. Don't screw it out yet though! Once the plug is out the dark hole that's left is a straight shot into one of your motor's cylinders and you don't want crap like accumulated dust, dirt, and the neighbor's annoying cat to fall in there. Here's where the vacuum comes in handy. With the plug still there, stick your vacuum in and suck up any flotsam that's made a home in that space. Once it seems reasonably tidy now you can stick your spark plug wrench in and undo the plug.

Once the old plug is out, give it a good look. The appearance can give you insight into your engine's health and maybe even answer some of the most puzzling questions in your life such as what you were destined to do or why Chinese food always makes you run to the john after eating a bunch of it.

Nah, spark plugs aren't really like crystal balls but how they look can tell you if your cars burning its go juice okay. Normally the end of a used plug should look brown or grayish-tan. Black soot can mean improper combustion. Oily black deposits are bad news and indicate your cylinder is losing compression and burning oil. If the electrode's worn then you should be glad you got around to doing this because that plug's ready for spark plug heaven.

Once you're done divining life's mysteries with the old plug you can get around to putting in the new one. First, double check the gap. Most plugs are pre-gapped now but it never hurts to be sure that you didn't get a clunker. NGK says the BCPR7EIX should have a .032 inch gap so stick your feeler gauge in there and see if that's what it has if you're using that type of plug.

After doing that, put some anti-seize compound on the threads to make your life easier the next time you do this and start threading the new plug into the hole. Be careful not to cross thread the suckers! If it doesn't feel like it's going in right it probably isn't so undo and try again. And don't overtighten either. Get the plug snug but don't wail on it with the wrench like an orangutan having an epileptic fit. To get the plug in place don't just drop it in there and hope for the best because you may screw up the electrode. A plug socket or wrench that has a rubber lining to grip the plug is helpful here but if yours doesn't do that you can use a long-nose plier or insert the plug in a piece of rubber tubing to act as a handle.

Once the plug's in place you can put the coil pack back on and screw it down. Attach the harness connector and then rinse and repeat this process five more times for the rest of the plugs.

After you get all six plugs just pop the coil cover back on and then go back in the house and have a nice vodka martini. Or you could skip that and drive your car. Whatever floats your boat.

Important disclaimer: Understand that working on your car can be inherently dangerous. This is meant to be a guide only and does not take the place of common sense and proper safety precautions. Only you can ensure your own safety and that of your vehicle. Know your limits and ask for qualified help if you're unsure of something. Every time you act stupid in the garage...God kills a Miata.