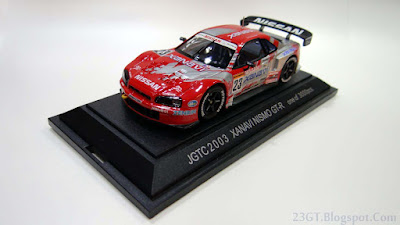 With Nismo clinching a second straight Super GT GT500 championship this past weekend I thought this would be a good time to introduce a new series of articles I'll be titling as “Auto Modellista”. The name is inspired by an obscure PS2 racing game but the focus will be on discussing important points in GT-R history (and maybe a few other marques if there's a chance) by looking at different model cars from my collection.

I'll start off with a model that's very near and dear to my heart because it was the very first die-cast GT-R I ever owned – the Ebbro 1/43rd scale model of the 2003 Xanavi Nismo GT-R. Back in 2003 I was still a fairly recent transplant to the US but my love for Nissan had already been longstanding. I drove a black 2002 Sentra SE-R Spec V but dreamed of one day owning a Skyline GT-R. Back then the Speed Channel still existed on cable TV and it was still a cool channel that showed foreign motorsports and not just endless NASCAR as it would do later on. One of the series it televised for a couple of years was the Japanese GT Championship or JGTC – now known as Super GT. 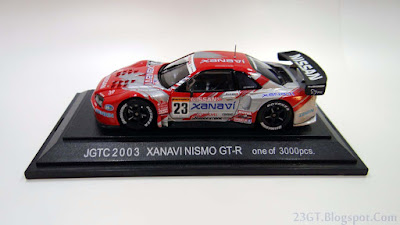 Coming into 2003 Nissan was going through a bit of a dry spell in GT500. They'd won the drivers title in 1999 when the R34 first debuted then almost repeated the following year but the title went to Honda. In 2001 and 2002 Supra drivers came out on top. A team title in 2001 was some consolation but that year would see them only win one race and in 2002 the story got even worse as Nissan was winless that season and the best placed Skyline was down in eighth position of the final standings. 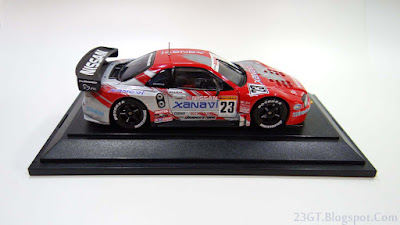 2003 presented an opportunity to redress the balance however because radical rule changes were introduced in GT500. Previously JGTC cars had to run a chassis based off the production car with the suspension locations similar to the road car. This meant the R34 suffered from limitations imposed by the large chassis of the production car. It doesn't take a rocket surgeon to deduce that an R34 is a less sleek car than a Toyota Supra or Honda NSX – the two cars it was up against at the time. In comparison to the low and sleek noses of its rivals the Skyline had the frontal area of a grizzly bear in a pink tutu and a top hat. The “ballistic refrigerator” styling of the R34 may have been endearingly muscular and striking but it hardly made for good straightline speed and aerodynamic efficiency.

For 2003, that all went out the window as the new rules required you only to retain the main section of the chassis between the front and rear bulkheads (basically the driver compartment) and the rest could be built as a tube frame setup. The suspension and engine mounting points could be moved as a result. Nismo took full advantage of the new rules and dropped the front end much further than the old car, greatly improving the frontal area. Downforce was reduced by the rules requiring a flat bottom but this issue was the same for the other teams. The engine – a VQ30DETT V6 (yes, dear reader, racing GT-Rs abandoned the RB straight six and were running twin-turbo V6s well before the R35 came along) – was positioned for a nearly 50/50 weight distribution instead of the front bias of the previous car. Numerous other changes were made including lightening the car and putting the cooling system in the trunk and using the fans for the system to improve diffuser efficiency at the tail. 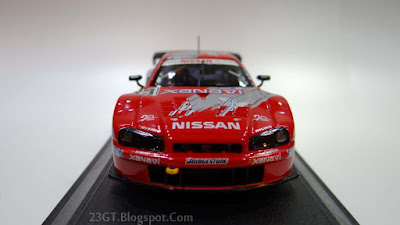 The end result was a leaner, meaner R34 GT-R than the ones that preceded it and in your humble author's opinion it's the most properly badass-looking R34 ever. The bear had lost the tutu and traded the top hat for a crash helmet - it was still big and imposing but now lethally fast.

The car quickly proved its speed by snagging pole position in the first round at TI Aida (now known as Okayama). The defending champion Esso Ultraflo Supra showed amazing speed however and took the win but the pole starting #23 Xanavi Nismo car took second. Round 2 at Fuji saw a Supra on pole but this time the Skylines would reverse things and the #22 Motul Pitwork car showed off the revised
model's straightline speed by taking the win, followed by the #12 Calsonic car for a Nissan 1-2. The #23 car finished in fourth while the Esso Supra ended up a dismal 12th. The Esso car would get its revenge in round 3 by taking the win at Sugo Sportland despite tough competition from the WoodOne Supra and the #23 car that ended up in third. The fourth round was an odd duck because the planned away race in Malaysia was canceled so Fuji had to fill in. It was also a two-part race with a sprint race followed by a longer main race. The Calsonic car blitzed through the pouring rain and won both races with the #22 Skyline making it another 1-2 finish. The Xanavi Nismo car was runner-up to a Honda in round five but round six would see its only non-points finish with an 11th. A fifth at the penultimate round in Autopolis kept it near the top of the point standings but it had a six point deficit to overcome against the Esso car that threatened to win back-to-back titles. 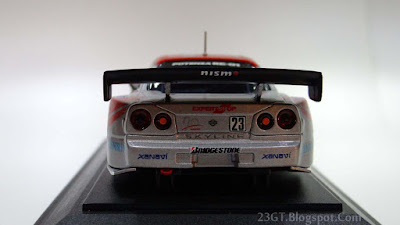 The #22 GT-R had suffered a mechanical failure at round 5 and a couple of other poor results had meant it was out of the title hunt. The fight would come down to the blue Esso car versus the red #23. With the title on the line the Xanavi GT-R put in a great qualifying performance to take up third place on the grid. The Esso was only able to get sixth but more importantly the Motul GT-R was in the spot ahead of it. At the start the #22 Nismo played its part to support the team's title hopes by holding the Esso Supra at bay while letting the #12 Calsonic GT-R through after it started seventh. The #23 had made its way to the lead of the race at the halfway point but the Calsonic was charging up fast. A gaggle of backmarkers let the Calsonic and the Takata NSX sneak past the Nismo car but it made no difference in the title chase because the rival Esso Supra was mired in 8th. It only managed to better that position by one place at the finish while the Xanavi car had ended up in third behind the Calsonic Skyline and the Takata NSX but that was more than enough for the title.

And so Nissan bid farewell to the R34 in the JGTC with the best possible result – the drivers title for Michael Krumm and Satoshi Motoyama and the team title for Nismo. To commemorate that win I decided to buy this model and it became the start of a large collection of GT-R models for me. 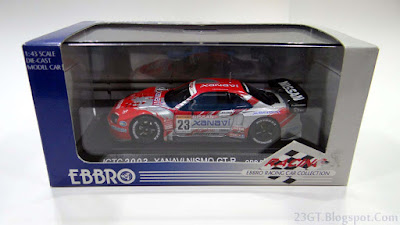 On a side note, the GT300 title that year was also won by Nissan with a 350Z taking the win. This would be a hint of things to come as the 350Z would step up to GT500 next year to try and defend Nismo's hard-won titles, but that's a story for another installment of this series. I hope you enjoyed reading this and that you'll come back for future posts.