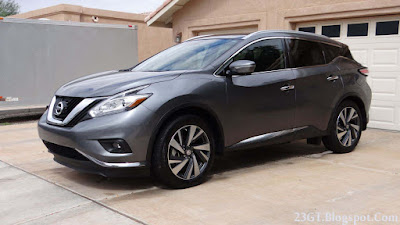 Back in September I had to go to Vegas on business and with the office paying for the trip I decided I wanted to drive something different for a change. Since my first impressions of the latest generation Nissan Murano were very positive I’d been dying to drive it for an extended period. My local Nissan dealer obliged me by wrangling one up for its rental fleet just as I was about to leave for Sin City. (In case you weren’t aware you can rent at many Nissan dealers and the selection can include just about anything in Nissan’s lineup short of a GT-R. My local dealer Sonora Nissan has had everything from bare-bones Versas to 370Zs to Titans).

For my Vegas trip they had a fully-loaded Platinum version of the Murano and loaded was an apt description – full leather interior, heated and cooled front seats, GPS, a huge sunroof, power everything including the tailgate, adaptive cruise control, blind-spot warning, and Nissan’s superb Around View Monitor system.

Wrapping up all those goodies is Nissan’s latest revision of the Murano’s avant garde looks. The Murano has always had styling that stood out in the large sea of crossovers with the first generation turning a lot of heads back in 2002. The second iteration was still unique but it was softened down and nothing radical for the time. It did turn heads again for the wrong reasons after it spawned the hideous Murano CrossCabriolet which must have been marketed to a very small demographic of legally blind drivers. Thankfully for this generation Nissan decided to make up for that atrocity by creating a design that was as stylish and eye-catching as the original Murano more than a decade before. The new look debuted with the Resonance concept at the 2013 Detroit Motor Show. The automotive press thought very highly of the Resonance and to Nissan’s credit they were able to translate the appearance of that concept to the production version very well. 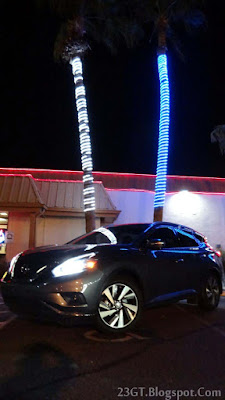 Describing a production car as looking like a concept vehicle is a cliché expression that’s usually about as accurate as saying I look like Chris Hemsworth because we both have a head and four limbs - but in the Murano’s case it’s quite fitting. If you compare the Resonance to the production Murano you see the same general shape and a lot of the styling cues that were pioneered on the concept. If anything I think toning down some of the concept's elements has only improved the Murano's look. The “floating roof” is the biggest design element and it’s since been adopted by the Maxima as well but it works much better on the Murano where the higher roofline makes it more noticeable and appear to flow better. The higher stance of the Murano also makes the contours of the nose far more appealing than in the Maxima where it makes the front end appear disproportionately bulbous. You could argue that the front end is bulbous anyway but that’s pretty much in keeping with the current trend of giving all crossovers and SUVs a nose worthy of a Union Pacific locomotive. In the Murano’s case it at least looks proportional and nicely shaped. The prominent side creases and the chrome accents on the sills of the concept carry over from the Resonance without too much toning down. Overall, the effect is sleek and stylish and I think it strikes just the right balance of swoopy curvaceousness to tone down the visual bulk without making it lose too much of the hulking machismo many buyers look for in an SUV/Crossover/Wagon-on-stilts thing. Even at the MGM Signature where I stayed the Murano didn't look dowdy or cheap compared to the luxury cars that regularly arrived in front. A couple of the valets were even sufficiently interested to ask a lot of questions about it.

An unfortunate side effect of the styling though is the same issue most cars have nowadays – poor visibility in the rear quarters. To help mitigate this at least the Murano comes with blind-spot warnings and the aforementioned Around View System which I’ve always thought was a great idea ever since I first tried it in an Infiniti QX56. I wish my R35 came with it but at least that car is a wide and low coupe – it’s sad when a tall crossover with a large greenhouse needs it too. Ah, the price of style. 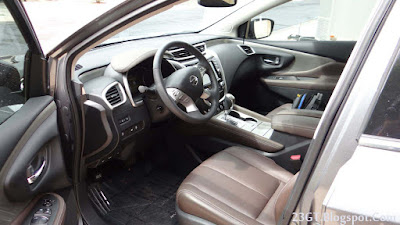 Like almost all concept cars the Resonance had a futuristic-looking interior that was obviously not destined to make it to the production car. Some cues were carried over though like the shape of the steering wheel and the curving lines in the dash. Like with the 2016 Maxima, the Murano is a marked improvement over Nissan interiors of old with a very upmarket feel, especially in this loaded Platinum version. The overall design is very pleasing to the eye although I thought the huge expanse of black plastic on the front passenger side of the dash could have used more than just a swage line to break it up. At least the materials feel upscale enough and there’s a striking metallic band across the top of the dash to add more visual interest. Ergonomics were excellent and there was plenty of legroom in the front as well as substantial cargo room. The rear seat legroom could be better but it’s not bad. Nissan advertises the Murano as having their “Zero-gravity Seats” that are supposed to be more comfy over long trips but I didn’t notice anything exceptional. Then again, for someone like me who’s used to long drives in body-hugging sport seats that’s probably no surprise. I guess my ass isn't as finely calibrated as others.

Crossovers aren’t exactly marketed for their driving prowess but the Murano handled well for what it was. Nissan’s venerable VQ V6 once again provides ample power that’s fed through the ubiquitous Nissan CVT. In this application it’s not a bad match though because the Murano has few sporting aspirations. Gas mileage was good and it did a credible impression of a regular automatic to avoid the annoying drone most CVTs have. The ride felt perfect for the long hours of highway cruising to and from Las Vegas and there was little intrusion from road and wind noise.

I did find annoyance with the adaptive cruise control which despite having adjustable settings was very conservative when encountering a car in front even when set to the lowest following distance. Even when the other vehicle was so far away that it seemed like it was in another zip code you’d feel the car frustratingly slowing down. On long stretches of desert two-lane road populated by lumbering RVs helmed by seniors escaping the northern chill – “Winter is coming” and all that – it was an annoyance. I couldn’t find any way of turning off the adaptive feature for it to behave like just normal cruise control so I hope Nissan thinks of including that option in the future to avoid minor bouts of road rage. 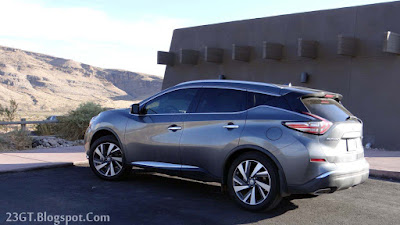 The cruise control was a small issue though compared to the overall competence of the car in the week we had it. It proved to be a great companion throughout that time and we didn’t want to return it come the end of the week. We liked it so much that I can honestly say I seriously thought about buying one but unfortunately a crossover doesn’t fit my need for having a vehicle that can tow my motorcycle trailer or handle the gnarly roads to some of the campsites I go to, so for now my trusty 2005 Pathfinder will stay in my ownership. I’m sufficiently impressed with the 2015 Murano though to say that Nissan did a great job on all fronts. I hope they continue to do the same with future models.