Do you like magazines? I love magazines. I like them so much I have a perennially large backlog of them that I can never seem to reduce. I'll tote a bunch along anytime I expect to have to sit waiting somewhere and they're one of my favorite ways for me to keep my impatient self sane when I have to spend valuable time in a waiting room, airport terminal, or perched atop the great porcelain throne doing my morning rituals.

If you like magazines the way I do then you'll want the book I'm featuring today – the Nissan Skyline GT-R Ultimate Portfolio. Unlike the two books I featured in my first Quick Reads article it's not an original text on Nissan's ultimate performance car, instead it's actually a compilation of magazine articles dating back to the the time of the original Hakosuka GT-R of the '60s up to 2010 when the R35 first arrived. 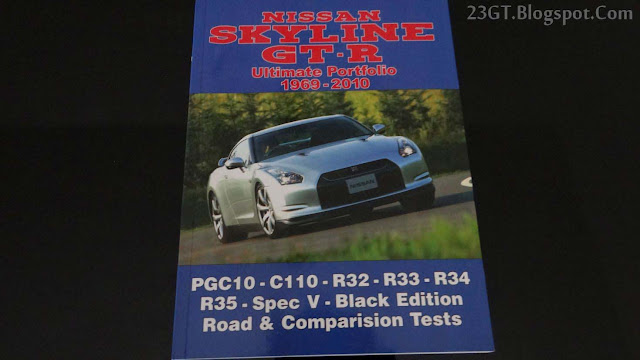 There's a total of 46 magazine excerpts all told, mainly from British publications but with a healthy Australian portion as well. Understandably only a few articles come from American writers deprived as we've been of the GT-R until the R35 came along, but there are at least two that date from before the current GT-R including one Car and Driver article that I distinctly remember reading as a kid. Seeing pictures in a car magazine of a teary-eyed Japanese girl woefully holding a torn-off Supra wing tends to stick in your mind.

The articles run the gamut from the original C10 GT-R to the current R35 but there's only two each for the earliest models, the Hako and the Kenmeri. For the first generation car there's really only one article since the other listed in the contents is atually  just a spec sheet from a car catalog of the time. The one proper entry that's in there from Sports Car World is still a great inclusion because it was published in 1970 when the Hakosuka was still new so it's interesting to see what the foreign press back then thought of this upstart performance car from Japan.

For R32 enthusiasts there's a lot more to go through, the highlight for me is an R32 buyer's guide that goes over a lot of points that would be good to know for a prospective san-ni owner. It's a decade old and published in a British magazine originally but still very relevant now to us American buyers since it goes over likely trouble spots like areas prone to rust and common electrical issues to check for. Once the later generations become legal to import there are also buyer's guides for the R33 and R34 that should prove handy. 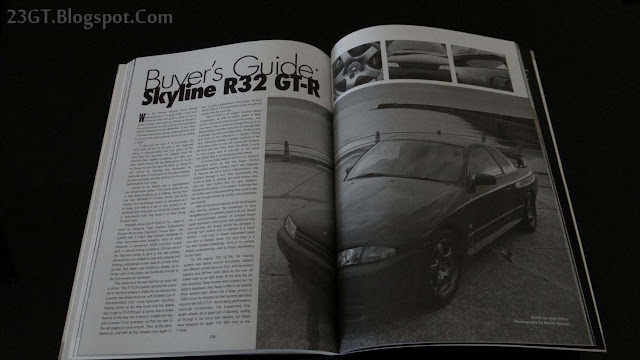 As can be expected the amount of articles increases with each generation and the R33 has a bit more than the 32, and the 34 a bit more still. It's a strong reminder of how hotly anticipated the R35 was that over 50 pages of the 192 in this book are devoted to that generation. What's odd is that only the last 32 pages are in color, weird considering a lot of the other articles were surely not in black and white originally. As a book for a GT-R fan that's the one major fault I can see with this publication especially considering the original $37.95 asking price. At that price point full color printing should have been expected for all the articles that were originally like that. 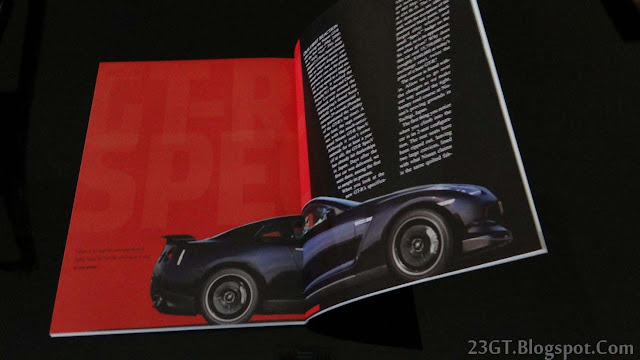 Even with that gripe, overall I think it's a good addition to any GT-R fan's collection especially since the magazine articles give you a unique perspective on the cars when they were new. Most books discuss older cars as they're perceived in the present time so it's great to read about the different viewpoint when the model was just released. We all know the Hakosuka was the start of the GT-R legend nowadays but what did writers at the time think of it without the rose-colored glasses of history affecting things? What did they make of the R32 back in the '90s? Was the R33 really seen as a step backward back then as a lot of people like to claim it is nowadays? Those are the kinds of questions reading old magazines answer and that's why as more magazines keep writing about the GT-R I'll keep adding them to my dusty stack of back issues for future reference. If you treasure that kind of info as well, this Nissan Skyline GT-R Portfolio is a must-have.

It's currently on Amazon for 30 bucks – and even cheaper from their marketplace sellers: