Nah, I wish. It's still got around 0.2 horsepower currently and that's only when a couple of guys push it around the shop to be moved. Le sigh.

Anyway, even though my new Nismo RB26 hasn't magically teleported into my engine bay yet work has been proceeding apace, well a slow pace, but A pace at least so I figured it was time for another Progress Bar.

Let's start off with a pic of the car as it is now: 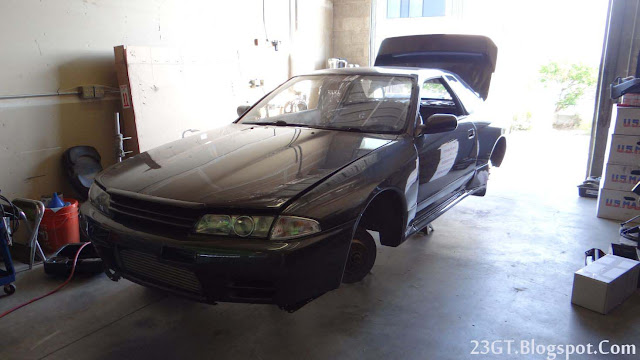 Oh my God somebody stole my wheels! And the brake calipers! And the front lip! And the interior! And the Armor All New Car Scent air freshener I had on the dash that was a Christmas gift! I'll never replace that!

Okay, the real reason all those bits are missing is because while I'm accumulating the parts for my new motor – and you'll like the list of parts when I eventually reveal it – I decided to take care of some other stuff on the to-do list. And besides, you'd know the interior was already missing if you read my previous Progress Bars.

So, lets go over what's been done or is in the process of being done:

In the coming weeks the old motor will be getting pulled out now that I've got a lot of the parts on the way. Once it's out it'll be time to refresh the engine bay in preparation for my shiny new Nismo mill to go in. God that'll be an awesome day...whenever it comes...in a thousand years or so...