While my R32 is still sidelined waiting to commence the engine swap I've been dicking around with more minor restoration tasks that have been on the to-do list. One of those tasks was fixing up the instrument cluster that had a nice Tomei speedo swapped in but the previous owner had also applied this horrifically cheap-looking “carbon fiber” vinyl to it. It looked about as tasteful as '90s era underbody neons. Ugh.


I wanted to not only restore it but give the cluster a more modern touch plus I wanted to swap in a Nismo speedo instead of the Tomei one since my R32 is a Nismo after all. In the process of research and the actual restoration work I found out a lot of interesting little details about R32 clusters that may be of use to other owners – such as when you need something to bore your wife or girlfriend into a coma.


In this first post I'll talk about the different R32 clusters then in a later post I'll discuss how I actually fixed up the one in my car.


First thing you'll probably want to know about R32 dash clusters is that there were actually two different versions and they aren't compatible with each other. August 1991 saw a coup in Russia and marked the start of the dissolution of the Soviet Union but more importantly it was the month when Nissan changed the design of the R32's dash cluster. Prior to 8/1991 clusters had yellow printed circuits on the back while after they were blue. I haven't found a reason for the design change in my research so far – maybe Nissan just liked the color blue better. The front face of the cluster looks the same on the pre and post 8/91 clusters except for the turn signals. On the earlier ones the cutouts are two separate arrow shapes while in the later ones there's a single oval cutout with the arrows printed on translucent plastic. Correction: I originally posted that R32 GT-R clusters were similar to lower model clusters except for the tachometers that had a higher redline on the GT-R versions. I forgot that the non-AWD cars have a different gauge on the upper left. On the GT-Rs and I believe the GTS-4s as well that gauge is a "Front Torque" gauge that shows how much power is being channeled by the ATTESSA system to the front wheels. On GTS-Ts, that's replaced by a boost gauge (since the GTS-T doesn't have the GT-R's trademark triple gauge cluster in the center console).

The redesign is important if you want to change speedometers on your car. Why would you want to? Because as most of you probably already know, the stock Nissan speedo on all R32s including Nismos and N1s just goes up to 180 kph. That sounds like a lot until you realize that that's only about 111 mph and you know no one drives that slow in California. There are several aftermarket speedos out there for the GT-R from a variety of Japanese tuners that have higher limits. My car had a Tomei that went up to 310 kph and had a GT-R logo on it. That's 192 mph – about the speed Texans like to drive. Nismo's goes up to 320kph for the GT-R. There's also a separate version for the GTS-T that only goes up to 260. The Mine's speedo also went up to 320 like the Nismo while Impul was more conservative at “only” 300. Veilside was more optimistic with a 340kph speedo but HKS was top dog with their Zero R 360kph speedo however I believe that speedo was only avai. There are several other brands out there, maybe even one that says “Spinal Tap” on it and only goes up to 11.


On the subject of the Nismo speedo, there are actually two versions – the more common dark one and the rarer white-faced version that usually was sold as a set with matching tach and ancillary gauges. A white-faced center console gauge set could also be bought to match. The top speed was the same at 320kph – just the color differed.

If you do want to change your speedo the important thing to know is that you have to make sure you get one that fits the year of your car. As I mentioned earlier the design of the pre-8/91 cluster is different enough from the post-8/91 version that the gauges from one won't work in the other.


The fact that many Skylines have had their speedos changed due to the top speed limit is the reason why a lot of cars have inaccurate odometer readings. It makes records more important to verify the actual mileage.


Another interesting thing about the R32 cluster is that the 180kph limit on the face wasn't the only attempt to limit top speed on the R32. If you look at these pics of my car's cluster on top versus the spare one I got off eBay below it you'll see mine is missing the little grey box on the back. What the heck is it, you ask? 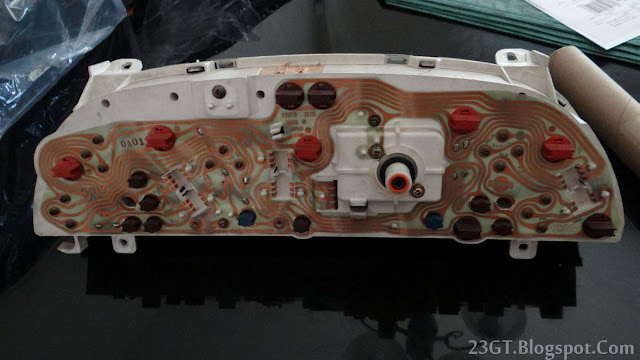 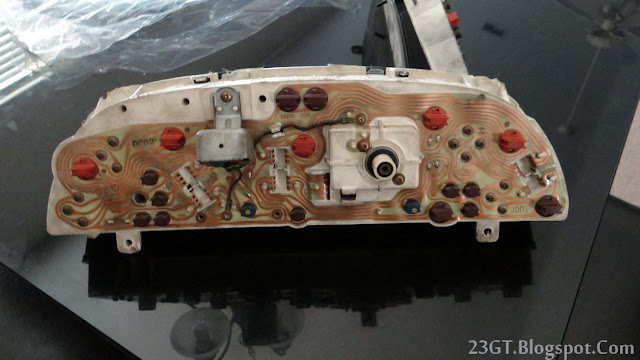 Well, from reading the service manual it seems to be a little device that sounds a chime at 110kph, summons the Japanese police, and causes John Denver songs to play on the stereo to put you to sleep. Okay, I'm lying about the last two things – it's just a chime, no one should ever be forced to listen to John Denver. Anyway, the silly thing is easily removable by detaching some screws.


You may be wondering at this point if there's any option to change your cluster from reading those silly new-fashioned metric readings to good old Southern-fried miles per hour. Well, there is – it's called a Sharpie.


For those of you who prefer a solution a little less MacGyver and a bit more McLaren then there's a UK company that sells replacement dash faces for the R32 and other Skylines. Since good old Blighty still uses the imperial units they forced most of the world to use before the uppity colonials got all in their face, UK owners have the same need we have – although with them it's a legal requirement whereas with us Americans we just hate being inconvenienced with silly math. Here's a link in case you're interested:


The downside to the Lockwood dial faces is that a) they only fit the standard 180kph speedo – so they won't work for you Texan speed demons and b) I've read the instructions and they involve a nerve-wracking removal of the needles from the gauges by prying them off. My fists of ham probably would break mine into a million-jillion pieces so no thanks – I'll just keep guesstimating my speed. Oh hello, officer! No, my house ain't on fire – but my brain is from trying to divide by 1.609 while driving!


One last thing I discovered while messing around with my car's cluster is that Nissan apparently made a unique gauge surround for the Nismo R32s. It's only a very tiny change but since the Nismos had no ABS they put in a black cover over the ABS warning light. They could have just omitted the bulb and had the same result but as a consequence it's one more little detail to differentiate a Nismo from a regular R32 GT-R. Of course you have to disassemble the cluster to find out but some car collectors are that anal. I assume the N1s have the same since they also lacked ABS. 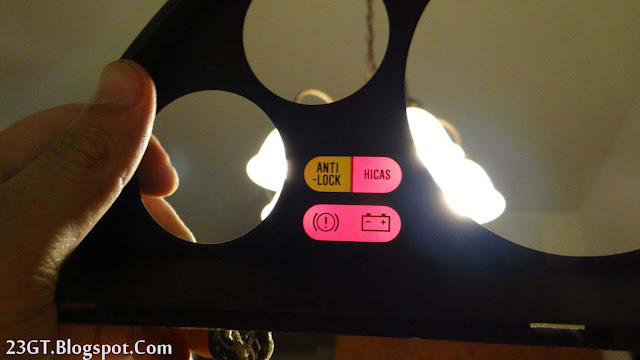 So there you go, more info than you'll probably ever need about Skyline R32 dash clusters unless you show up on some bizarre gearhead version of Jeopardy. Next time I'll try and not bore you as much by talking about how I fixed up my poor car's disfigured cluster.